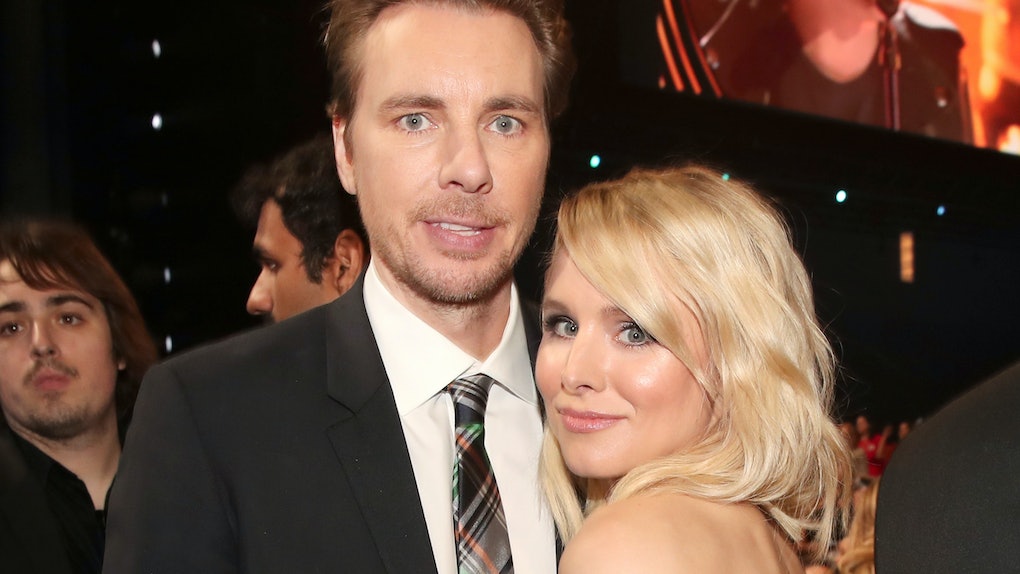 Kristen Bell and Dax Shepard are the true definition of #CoupleGoals. They're funny and successful and they just seem like such great parents. And no, I'm not jealous at all. The pair has two daughters — Lincoln, who is 6, and Delta, who is 4 — in case you didn't know. And even though Mom and Dad have been careful to keep their girls' faces off social media, the couple has always been open and honest when it comes to sharing all the hilarious family anecdotes. You know, like that time their kiddos busted them having sex. So awk! But if you liked that story, you'll love the one with Kristen Bell and Dax Shepard's kids' reaction to finding out their parents are famous.

See, Shepard rolled up to The Late Show with Stephen Colbert on June 17, where he explained to the host what went down when he broke the news to his kiddos that both he and Bell are A-listers. The big takeaway here is that they probably don't air episodes of Parenthood and The Good Place in the house on the regular and like, OMG you guys, why the eff not?

Anyhoo, Shepard was in the middle of talking about how his daughters are at the peak age for "snuggle sessions" when Colbert straight-up asked if they knew he and Bell were famous.

"Okay, so that is an interesting question," Dax replied. "They know that mom is Princess Anna from Frozen. They know that, they understand it. But I was talking to my daughter, and she said, 'Why do people listen to [your] podcast? Do they listen for you, or for Monica,' my co-host? And I said 'Well, it's 50-50. But I think initially they started listening because they knew me and not Monica."

Shepard's daughter then asked the next logical question, which was: "Well why did they know you?"

To which Shepard replied: "Well, because I'm famous. "

But wait. It gets better. Because Shepard then confessed to his daughter that not only does Mom know, but she's actually more famous that he is.

And her reaction to that major truth bomb?

I seriously just can't with this adorable family!

"She understands how we’re making money," Shepard explained to Colbert. "But this word ‘famous’ was its own thing. Like, at kindergarten, I guess, we were all of a sudden Taylor Swift."

Sure, let's go with that.

Colbert then asked Shepard if his kids now think everyone in the fam is famous. Which led to the Parenthood star telling a pretty hilarious story about the time his mother — who goes by "Gaga" in the Bell-Shepard household — was babysitting the girls during The Golden Globes. See, Sam Elliot name-checked Lady Gaga during the show, and I think y'all can probably imagine where this story is headed. I can't even begin to do it justice, though, so I'll just let Shepard tell it below.

He does a pretty amazing Elliot impersonation, BTW.

You know, because he's famous.