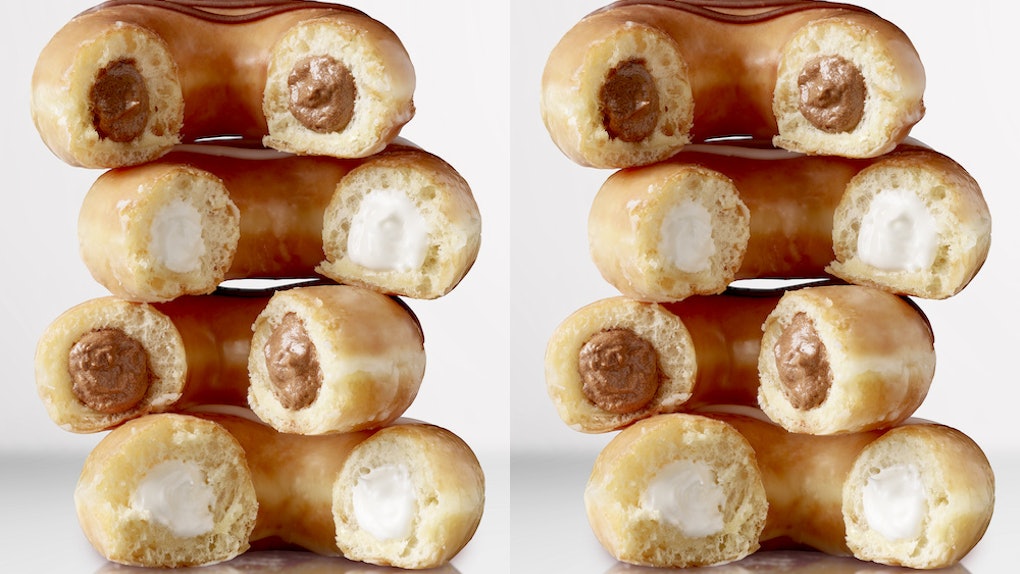 Calling all sugar addicts, doughnut aficionados, and, of course, my breakfast babes — North Carolina-based pastry chain Krispy Kreme is doing something that's never been done before. The brand is now giving customers the option to add one of two different flavored fillings to the chain's Original Glazed doughnuts, and to be completely honest, I don't think my body is ready. Yes, you heard that loud and clear, folks — Krispy Kreme's new filled Original Glazed Doughnuts are about to revolutionize your daily existence, and IDK about you, but I seriously cannot wait.

Starting on Monday, June 17, Krispy Kreme is totally changing the game (and also my life) by filling its iconic Original Glazed Doughnuts with different flavored creams. Upon ordering, according to the press release, each customer will be given the option between two different kinds of fillings: Classic Kreme, which is vanilla-flavored, and Chocolate Kreme. Deciding will be undeniably tricky, so make sure you make the right choice. Luckily, they are a permanent offering, so you can treat yourself both variations until the end of time. According to Krispy Kreme, note that a single Filled Original Glazed Doughnut will be priced the same as other filled doughnuts, and a dozen will cost the same as an assorted box. TBH, my doughnut fund is pretty much bottomless.

In the press release, Dave Skena, Krispy Kreme's Chief Marketing Officer said Krispy Kreme was inspired by the upcoming 50th anniversary of the first lunar landing. Krispy Kreme was present at the launch of Apollo 11, so they decided to change things up and celebrate with something new.

According to the press release, Skena said:

Krispy Kreme was at the launch of Apollo 11, serving fresh doughnuts to Americans witnessing liftoff of this monumental mission. As America prepares to celebrate the 50th anniversary of the moon landing, we want to give our fans a new taste experience that is out of this world. We choose to fill our Original Glazed® doughnuts, not because it is easy, but because it is hard (no disrespect intended, JFK). Actually… it’s not hard, it’s melt-in-your-mouth delicious.

Oh, and I haven't even gotten to the best part yet. According to the press release, on June 22, the chain will be giving away Original Filled Doughnut for free at participating locations across the country while supplies last. Definitely check the Krispy Kreme website for additional information, and make sure to call your nearest location before you go, to ensure your neighborhood location is — in fact — offering the delicious promotion.