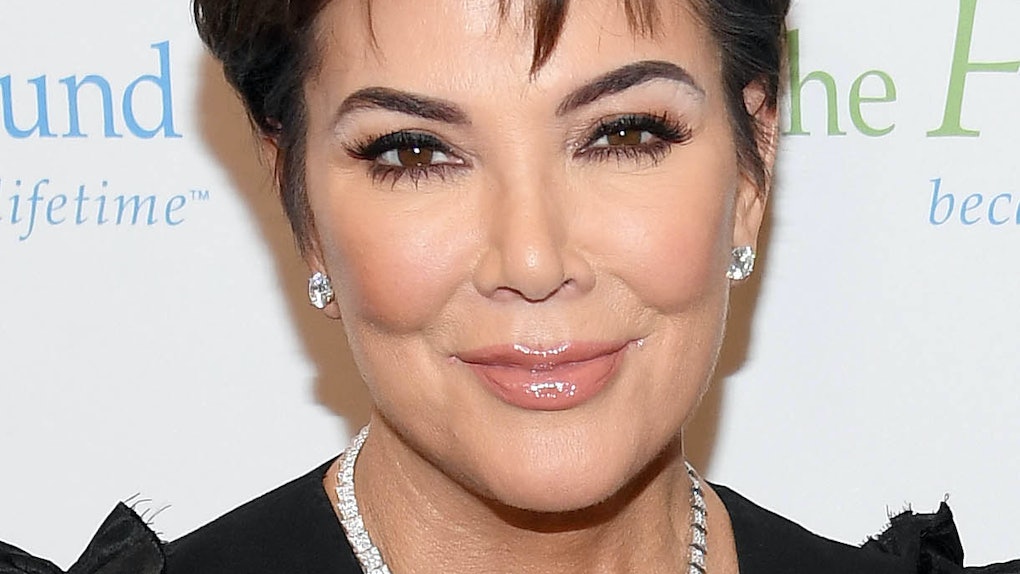 Let's be real y'all, Keeping Up With The Kardashians is so entertaining and filled with some of the most emotional and bizarre moments happening in the Kardashian-Jenner clan's lives. Like, every moment is captured on tape and you have to wonder if there's anything the highly-publicized family truly regrets having featured. Well, the Kardashian-Jenner matriarch spilled the beans, and honestly, Kris Jenner's quote about what embarrasses her about old KUWTK episodes is just so freakin' relatable.

On Sept. 11, Kris Jenner appeared on The Late Late Show with James Corden to promote the 17th season of KUWTK. Corden, like the pro that he is, began by asking the most important question first, "Do you ever go back and look at early episodes of the show and are you ever embarrassed by them when you look back at them?" LOL, Corden has no chill. Jenner actually responds with the most relatable answer ever. "Only by the outfits, I think, and the hair. Stuff like that," Jenner said.

Being fashionable involves taking risks and while viewers can simply delete any photos with major fashion faux-pas from their social media accounts, being incredibly famous and on TV means fans get to relive celebrities' worst moments over and over again. To be fair, Jenner admitted she is totally aware that these sort of funny hiccups in their journey have earned the Kardashian-Jenner family their loyal fanbase.

"Sometimes it can get a little cringeworthy, but I think that everything we look back on is such a great lesson and taught us so much," she added. "And we're here because of the journey we've been on, so I'm just grateful."

Awww... that's great to hear that she truly appreciates her fans. Corden, on the other hand, was still after the tea and followed up by asking, "If there was one moment you could go back and change in the history of 'Keeping Up With The Kardashians,' what would you change?"

"On Keeping Up With The Kardashians?"she asked.

Corden continued to hilariously press her, asking, "Yeah, if there was one bit where you were like 'Oh, I really hated that bit.'"

"You know, I don't think I would change a thing," Jenner said. "I think it got us to here and that's a blessing."

Oh yeah, being able to say you have executive produced 17 seasons of an incredibly popular show that you also star in is definitely a blessing. But that sort of success also takes a considerable amount of hustle and organization, skills that Jenner apparently employs while preparing for the apocalypse. Yeah, her talk with Corden took an interesting turn as they began to discuss the cleanliness of fellow guest James Van Der Beek's pantry.

"You're into this because you're a bit of a Doomsday prepper, right?" Corden said to Jenner.

"I'm a Girl Scout," she said of her skills. "I have the biggest generator and I'm one step away from a bunker… I have earthquake packs in every car, big backpacks … and clothes, and tennis shoes and baseball caps in case I get stuck on the freeway. So, if anybody ever sees me walking down the freeway with a baseball cap on, please pick me up."

LOL, but seriously, she is prepared which is probably why Kris Jenner and her kids are so successful. She set them up well. Honestly, at this point, I'm just taking notes. Now, excuse me, I have a pantry to organize.