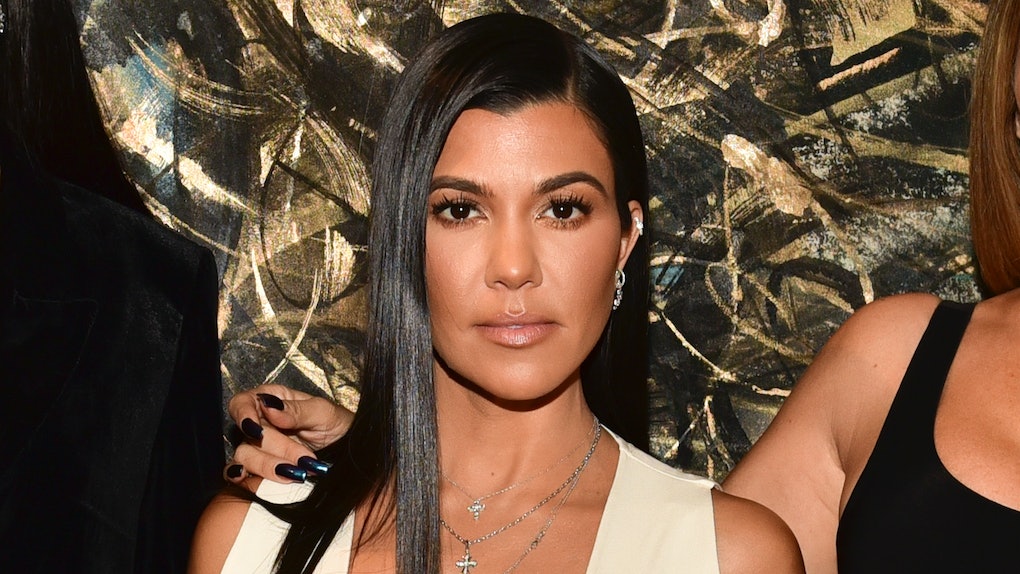 Kourtney Kardashian's Tweets About How She Disciplines Sparked Debate

If you were busy watching The Emmy Awards on Sept. 22, you probably missed all the majorly messy drama going down over on Keeping Up With The Kardashians. Kourtney Kardashian and Scott Disick went at it with Kris Jenner's boyfriend Corey Gamble, after Gamble suggested that they use corporal punishment to discipline their 7-year-old daughter, Penelope. The pair — who are anti-spanking — was beyond appalled by Gamble's suggestion, and Kourtney Kardashian's tweets about how she disciplines her kids that she shared while the episode was airing reiterate that in no way would she ever be OK with physical harm of any kind — and it certainly kicked off a debate on Twitter.

See, Disick, Kardashian, Jenner, and Gamble were gathered at Nobu for dinner — along with Kris Jenner, Kim Kardashian, and family friend Jonathan "FoodGod" Cheban — when Kourtney revealed that Penelope had been "out of control" lately and even scratched her nanny on the face, prompting her to quit. Kourt also copped to being at a loss when it comes to disciplining her daughter, since "there's nothing I can take away from her physically that she will care about."

Annnnd that's when Gamble decided to pipe in with the whole corporal punishment thing.

"You would whip Penelope's *ss if she scratched you?" an incredulous Disick then responded.

"I would give her a spanking for sure," Gamble replied.

The argument just spiraled from there.

Not only did Disick freak out on Gamble for the comment, but Kourtney even threatened to keep Gamble away from her kids.

"He will never be with my kids alone and if he does that in front of any of us there will be a f*cking issue!" she exclaimed.

Later in the episode, Kourtney and Gamble attempted to work thing out, with Gamble explaining he has no intention of ever disciplining Kourtney's kids. "I don't have kids. So, obviously, I'm not going to be disciplining no kids," Gamble explained.

But Kourt is seemingly still not over the debacle, since she sent out a whole bunch of fiery tweets while the episode was airing last night.

"Yes he said he would whoop her ass if she scratched him," she wrote in one tweet, after a follower asked if she understood what Gamble was trying to say. "That is NOT ok with me and never will be."

"And in my opinion beating children is not the way to 'get your kids in check,'" she added in a follow-up. "When children are hurting or frustrated, the answer is not to physically hurt them."

She also retweeted a supportive tweet from a fan that said: "I was hit as a kid it only made me rebel and be more disrespectful!!" Then Kourt added that she completely agreed.

Check out some of these other supportive tweets:

Not everyone on social media had Kourtney's back, though:

Khloé Kardashian rolled up to Twitter to come to her big sister's defense, though:

Whether you're #TeamKourtney or #TeamCorey on this one, I think the majority of KUWTK fans can agree that it's never OK to discipline other people's kids, but that Kourtney and Scott do need to start addressing their kids' behavioral issues before it's too late — which it looks like is just what they plan to start doing.

"I definitely think our children's behavior should be dealt with between Kourtney and I," Disick revealed in a confessional during the episode. "We've gotten this far, and we've done a pretty good job, so I think we can handle it from here."