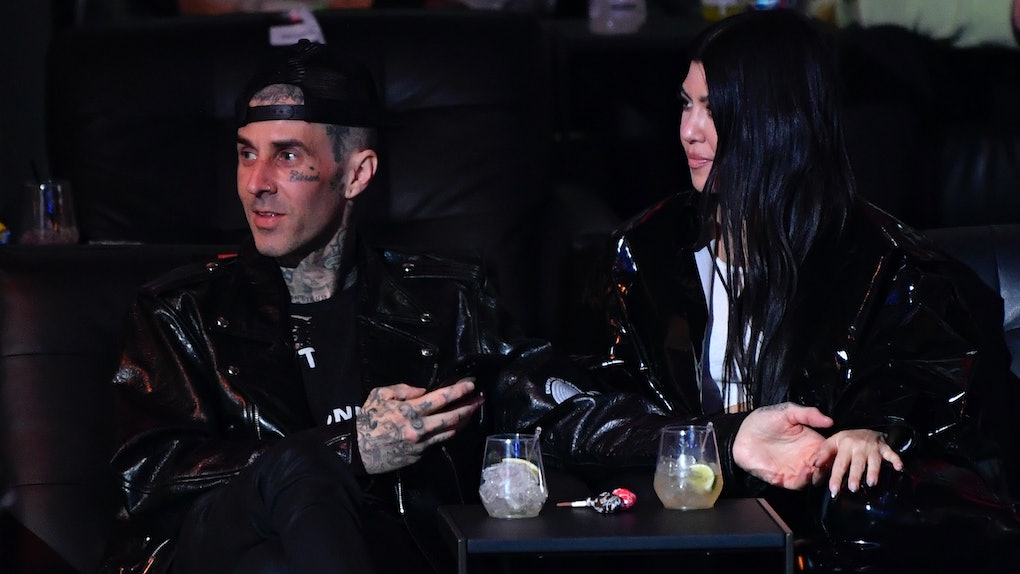 Say what you will about the Kardashian-Jenner family, but one thing's for sure: they aren't afraid to live their lives out in the public eye. For instance, take Kourtney Kardashian and Travis Barker. After years of friendship (and the occasional dating rumor), these two finally went public with their relationship in February 2021. They've been mushy on social media ever since; Barker has even posted photos of Kardashian's love notes for him on IG. The question is, does Kourtney Kardashian and Travis Barker’s body language mirror the kind of connection they present on social media?

While body language might not be a foolproof way of knowing everything about a couple's true dynamic, it can offer hints to their chemistry on a subconscious level. I reached out to Traci Brown, body language expert and author of Persuasion Point: Body Language and Speech for Influence, and body language expert Yana German for their takes on Calabasas' hottest new couple. Here's what the experts say Kardashian and Barker's body language shows.

They're very reserved in public.

In this March 19 image of the couple outside the restaurant Nobu in Malibu, Brown tells Elite Daily these two look out of sync. “They're not in step,” she points out. “No part of their body language is matching.” German agrees that they looked disconnected. “He's going his way, his body positioning is straight. She's more towards him than he is towards her. She's twisting a little bit,” she tells Elite Daily.

German also points out that Kardashian is putting up her guard. “Her left hand over the navel, it’s guarded. Whenever you have a hand in that area it’s more of a protection gesture,” she says. "The right hand is guarding, behind her thigh. An indicator she's careful. She's watching, she's on standby and he's checking it out herself. She’s cautious, but yet she's still interested in him.” It's also possible she's on alert because of the paparazzi, and her posture has little to do with her partner.

He's very guarded when it comes to PDA.

The couple went back to Nobu the next night. The time, they displayed more affection — they held hands as they walked in. However, German points out that Barker still looks somewhat hesitant to be affectionate in public. “He's cautious with his feelings. He's holding her hand but, at the same time, there's a bit of a disconnect. There's a distance between them and yet his right hand is holding hers. His left arm is either behind him or in his pocket, [showing] he’s guarded. He's really careful when it comes to his feelings especially in the public eye,” she explains.

German is quick to add that this reluctance towards PDA doesn't mean there isn't real emotion here — just that he might not feel a need to show off in public. Brown also notes that there's an intimacy to the way they're holding hands with their fingers interlaced.

They're both being careful with their hearts.

On March 27, the two headed to Las Vegas and attended the UFC 260 event, where they got a bit cozier. While Barker looks a bit distracted, Kardashian’s body language shows that she's focused on him. “She's got her knees pointed towards him,” Brown notes.

Again, German sees some reticence in Barker's body language, but she isn't too worried about their connection. “There are definitely feelings for her,” she explains. “Yet he's a little bit closed while he's reaching out. His fingers are a little bit closed, like he's holding a cup, which shows he's guarded. At the same time, he wants her to know that he's there.”

While the experts might not see a couple that's overly expressive with their affection, it's important to remember that the relationship is new, and both parties have had their ups and downs when it comes to love. In that case, it's only natural (and even healthy) that they appear to be taking their time and guarding their hearts a bit, at least if their body language is any indication. What we see in public isn't the full picture for this couple. Time will ultimately tell if they're meant to be.