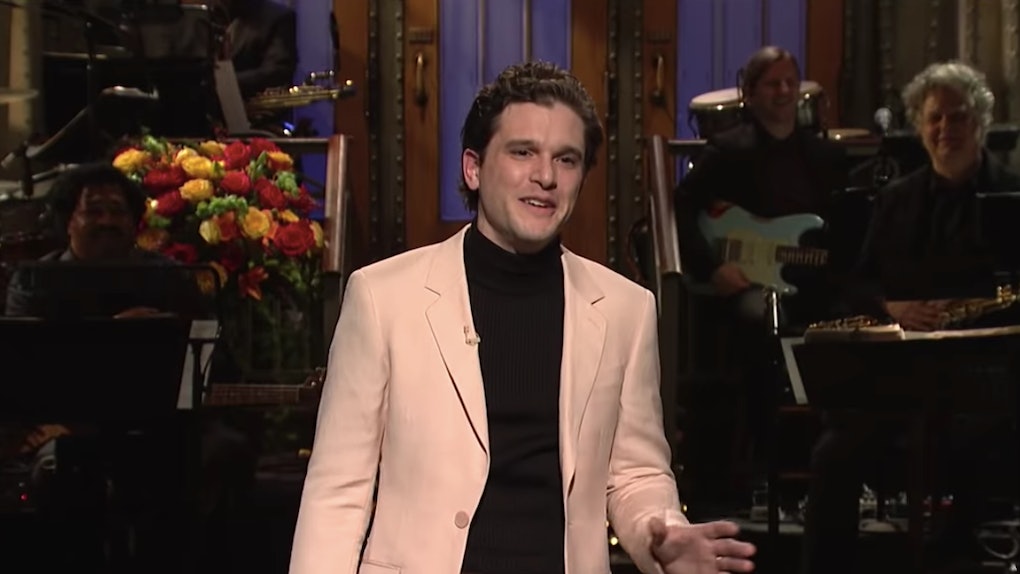 Hosting Saturday Night Live has to be pretty intimidating — you're presenting in front of a live audience for a show that's been wildly popular for the last 45 years. But when Kit Harington hosted on Saturday, April 6, he was lucky enough to have a handful of his closest pals in the audience, who appeared in his opening monologue. If you haven't seen Kit Harington's SNL monologue about Game Of Thrones, it featured a series of surprise guests that came to support the beloved Jon Snow.

In his monologue, Harington took the stage wearing a Linen Blend Suit from Sandro Paris' SS19 collection, paired with a black turtleneck, which was actually a super solid choice, if you ask me. He was totally clean-shaven and immediately addressed it (because seriously, seeing him without a beard is weird!) before joking about the fact that most of the audience knows him as the hunky-yet-brooding Jon Snow — not his lesser known roles in Pompeii or Silent Hill: Revelation.

One fan in the audience then raised his hand and asked who wins the Iron Throne (because honestly, who isn't dying to know that?), which led to a surprise inquiry from none other than Emilia Clarke (who plays Daenerys Targaryen on the show) about the show's ending. Though she's still alive on the show (thank God!), she said it's been far too long since filming the previous season, and she also noted that during filming, she's usually occupied talking to a CGI dragon which is a tennis ball on a stick. In an even cheekier quip, she asked Harington, "Do you remember in Season 6 when we had sex?" After he confirmed, she joked, "Did you know they filmed that?" LOL!

Continuing the star-studded monologue, John Bradley (who plays Samwell Tarly on the show) stood up to ask what happens to his character. Harington didn't know how to answer the question, and then Bradley asked if they can still hang out after the show ends. He suggested next Tuesday at 6 a.m., which Harington said he won't be able to do, and Bradley joked that he was awfully disappointed and told Harington that he had "totally changed" since the show's wrap. Don't worry, they hugged it out at the close of the show.

Next in line with questions about the show? The Night King which — according to EW — was just Pete Davidson wearing a mask. He asked Harington, "I just need to know: Do people hate me? Because it really feels like they hate me." LOL, sorry Pete, er, Night King.

Finally, Harington's wife, Rose Leslie, (who played Ygritte on the show), stood up, and asked what they're going to do for money now that the show is ending... and how long it'll take for him to grow back the beard. Seriously, though — we were all thinking it.

Anyway, if you haven't seen Harington's SNL monologue in its entirety, make sure to watch it, below. You'll definitely be glad you did.

Ugh, IDK about you, but I seriously love that man. He's funny, humble, and let's face it: He's a total hunk. I am forever jealous of Rose Leslie, to be completely honest. After fielding all the questions from his cast, Harington went on to star in some hilarious sketches, including this one about Game of Thrones spin-offs.

IDK about you, but I am totally here for that Game of Thrones/Law & Order: SVU mash-up.

Anyway, with the Game Of Thrones premiere date just around the corner on April 14 (yes, it's really happening!), people are clearly getting antsy for the show to start. It looks like the entire cast is getting excited too. Honestly, though, I just want to know how it all ends... until then, I'll just be ogling over the GOT season 8 promos. They're so intense.

More like this
8 Facts About Lisa Delcampo On 'The Circle,' AKA Lance Bass' Assistant
By Rachel Varina
Shonda Rhimes' Quote About Regé-Jean Page Leaving 'Bridgerton' Is SO Shonda
By Rachel Varina
Simu Liu's Tweets About The 'Kim's Convenience' Finale Promise "Tea & Receipts"
By Dylan Kickham
Stay up to date