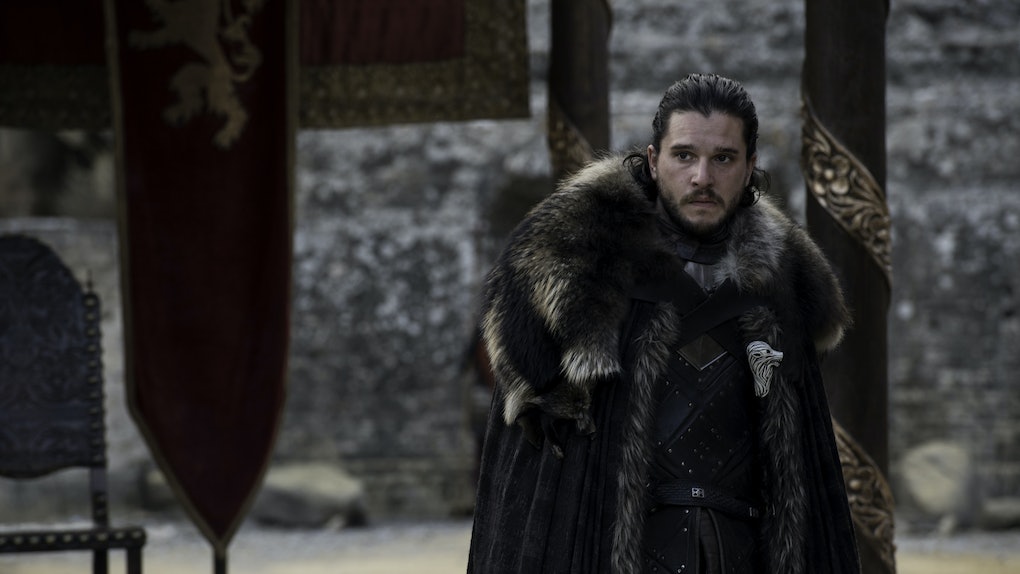 Kit Harington is on a promotional tear ahead of his starring turn in Gunpowder, the BBC drama he is also producing. But with so many interviewers wanting to know Game of Thrones details as well as Gunpowder ones, Harington has found a clever way around it. Instead of talking Game of Thrones spoilers, he's telling stories of his former GoT costar and now fiancee Rose Leslie. The latest one to come out is the story behind Kit Harington's Game of Thrones costume for Halloween a couple of years back.

I already hear people in the back groaning: "Kit wore a Game of Thrones costume for Halloween? Isn't that, well, tacky?" Indeed, he did, and indeed, it was. Hilariously tacky, in fact. Especially because he didn't just dress up as any Game of Thrones character. He dressed up as his own character, Jon Snow, in a version of his own costume.

But as he tells the story to the U.K. magazine Heat, it wasn't his fault. Rose Leslie is the one who came up with the idea, and she not only insisted, but when she saw he might balk, she emotionally blackmailed him into agreeing. Sounds like someone picked up quite a few relationship pointed during her time in Westeros. Cersei would approve.

According to Harington, the party they were going to was a "bad taste" Halloween party, which is such a British thing, I can't even. The idea obviously is to come in a costume that's in completely bad taste. Think the godawful "Sexy Eleven" costumes you've seen for sale, or perhaps that even worse Anne Frank costume that sparked controversy this week.

But while some dress up in outfits that no one in their right mind would wear, Leslie had one better for Harington. Because it's not just bad taste for an actor to dress up as a character he's played, but a character he's still playing, on a show that's the biggest thing on TV.

When Harington balked at the idea, she was not dissuaded. In fact, she decided to simply up the stakes.

She pulled out a Jon Snow costume, and Rose just whispered in my ear: I won’t love you if you don’t wear it.

The best part? It wasn't one of the good Jon Snow costumes you can get on Etsy, or one of those really well made cosplay pieces that you see guys wearing to Comic Cons to knock the socks off of the other attendees, nor was it his costume from the actual Game of Thrones costume department

Instead, what Leslie made him wear was one of those extra cheap looking store-bought supermarket-level costumes. You know, the kind that are "one size fits most" (but not really), and are weirdly uncomfortable and itchy because of the cheap material.

It was really embarrassing. The people bringing around canapes were looking at me, thinking: You’re sad man! You’ve come to a party dressed as your character.

You know it's really bad when you're at a party and the people who were hired with the catering company to pass out the food are the ones looking at you pityingly.

Still, it's good to know that Kit Harington doesn't mind being the butt of a joke, even if it's a joke that his future wife came up with. And we're sure that when it came time to vote for which costumes was in the worst taste of anybody, Harington's definitely got some votes

Gunpowder begins airing on Saturday, Oct. 21st on BBC One. Game of Thrones' final season will probably show up circa 2019.

More like this
Here's How To Vote For The Next 'American Horror Story' Theme Among 6 Options
By Cianna Garrison
This 2021 'Game Of Thrones' Season 8 Trailer Is So Confusing... & So Good
By Ani Bundel
In 'Riverdale' Season 5, Toni Topaz Is The Black Superwoman Without A Cape
By Erika Hardison
Stay up to date