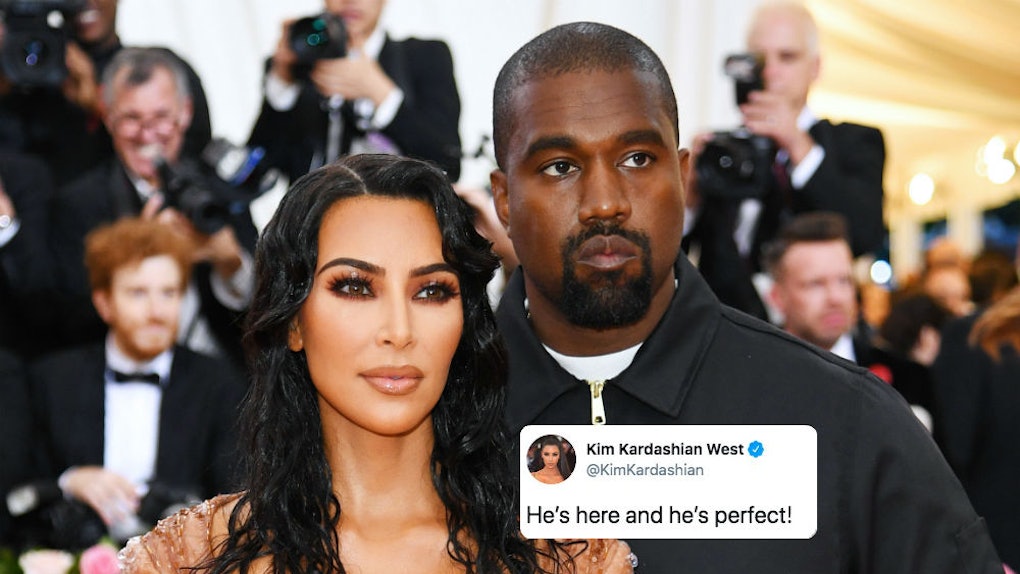 Kim Kardashian and Kanye West are probably over the moon right now because, on May 10, their surrogate gave birth to their fourth baby. And considering that Kardashian babies are literally the closest thing America has to a royal baby, the general public is pretty excited for them as well. You can probably imagine already how lit Twitter is now that baby No. 4 is here. But if you need proof, look no further than Kim Kardashian's tweet about her fourth baby's arrival and the hilarious joke everyone is making about it.

At 12:03 p.m. on May 10, Kim took to Twitter after her baby was safely delivered to post a simple announcement to alert her fans about the amazing news, writing, "He’s here and he’s perfect!" It's a pretty genuine, but simple proclamation to me! But, of course, Twitter can never miss a chance to lightheartedly troll a huge life event in the Kardashians' lives.

Twitizens have been hilariously trolling Kim's tweet by quoting her tweet with different situations where, "He’s here and he’s perfect!" would be the perfect reaction. One fan gushed about their cat, writing, "When my cat comes to sit on my lap." Some just took it as a personal compliment, tweeting, "Not the first time I've been told that." Others only had food on the brain, responding, "When the pizza delivery guy knocks." Basically, Kim Kardashian's tweet works as a reaction for just about any and every situation imaginable!

Check out all the hilarious reactions below:

It seems like it was just yesterday when Kim Kardashian appeared on Watch What Happens LIVE with Andy Cohen to announce that she had a baby boy on the way via surrogate, but that was actually way back in January.

Fast forward 30 seconds (aka, four months) to May 9, and Kourtney Kardashian was appearing on Ellen with all her kids and some of her nieces and nephews in tow to surprise Kris Jenner with some super-special Mothers Day news: Kim's surrogate had gone into labor.

Kim followed up on that exciting announcement with her now-iconic tweet saying "he's here and he's perfect." And followed up with some key details her fans have been itching for: What the baby looks like!

"He’s also Chicago’s twin lol I’m sure he will change a lot but now he looks just like her," she wrote in a follow-up tweet.

Ummmm... Chicago's twin? How can that much cuteness be contained under one roof? And how does Kim bare to say no to their adorable little faces? Like, I would spoil them with all the cookies, candy, ice cream, and literally anything else they could ever possibly ask for. All they'd have to do is bribe me with their adorable little smiles. Foreal.

Clearly, though, Kim has been exposed to her kids' cuteness and charms enough to develop a resistance. For example: That time she told North West that she couldn't wear her pink snakeskin, knee-high heels to school. Obviously, little Northie was not pleased.

Good luck saying no to your new Chi lookalike, Kim! I do not envy you!