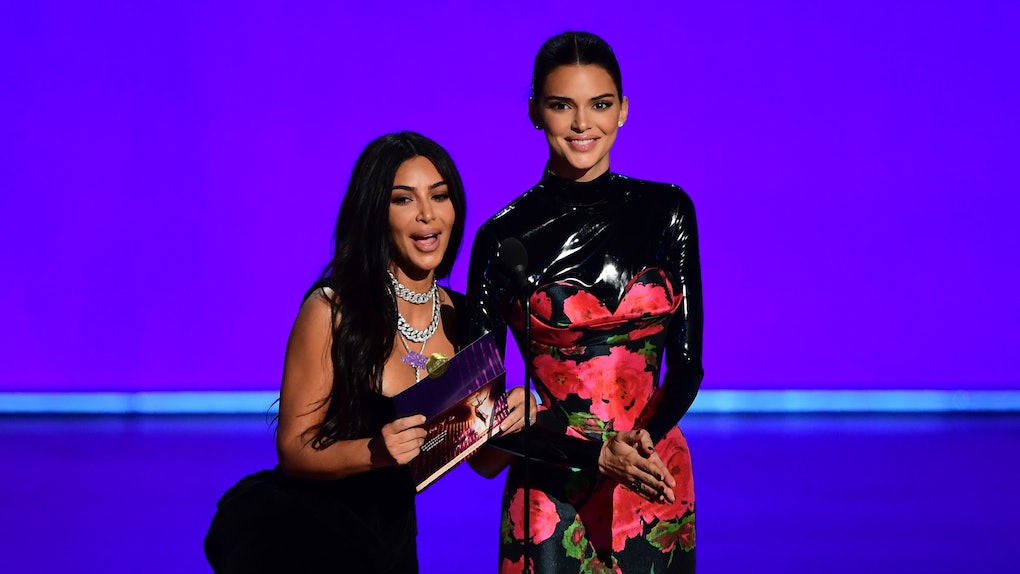 People are always mixing up the Kardashians, and according to Kim Kardashian, it's been happening to her family since forever. During a March 21 joint interview with Kendall Jenner, she revealed people would often think she was her sister's mother when they were younger, and it was all because of their 15-year age difference. Kim Kardashian's reaction to being mistaken for Kendall Jenner's mom was surprisingly positive, however.

Kardashian explained the hilarious mix-up during an interview promoting her and Kendall's upcoming trio of fragrances, KendallXKKWFragrance, which will go on sale on Thursday, March 25. "When [Kendall] was first born, when she was under a year old, I used to have to be her babysitter all the time. I was like 16. And my mom and her dad would have to work and I would have to go and I would have to carry her in the stroller," Kardashian recalled, explaining their age difference made people believe they were mother and daughter, and not siblings. "Everyone thought she was my kid. I was so grown, and I kind of secretly loved it."

Kardashian may have been joking about being her sister's twin, but just a few days ago, she made fans do a double take with her and Kendall's joint photoshoot for KKW Fragrance. Kendall's love of horses and the outdoors inspired her and Kardashian's perfumes, so the pair wore matching horseback riding gear for their photos that made them look so alike. People commented things like "Twins 😍," "Wow, you look so similar," and "Kim and Kendall, separated at birth."

The sisters' collaboration will arrive on the heels of the Keeping Up With The Kardashians Season 20 premiere on Thursday, March 18. The last few minutes of the episode teased Kardashian might finally address her split with Kanye West next week. She reportedly filed for divorce from him on Feb. 19. While Kris and Caitlyn Jenner have commented on the situation, Kardashian has remained silent.

To find out what happens, tune into KUWTK on Thursdays at 8 p.m. ET on E!