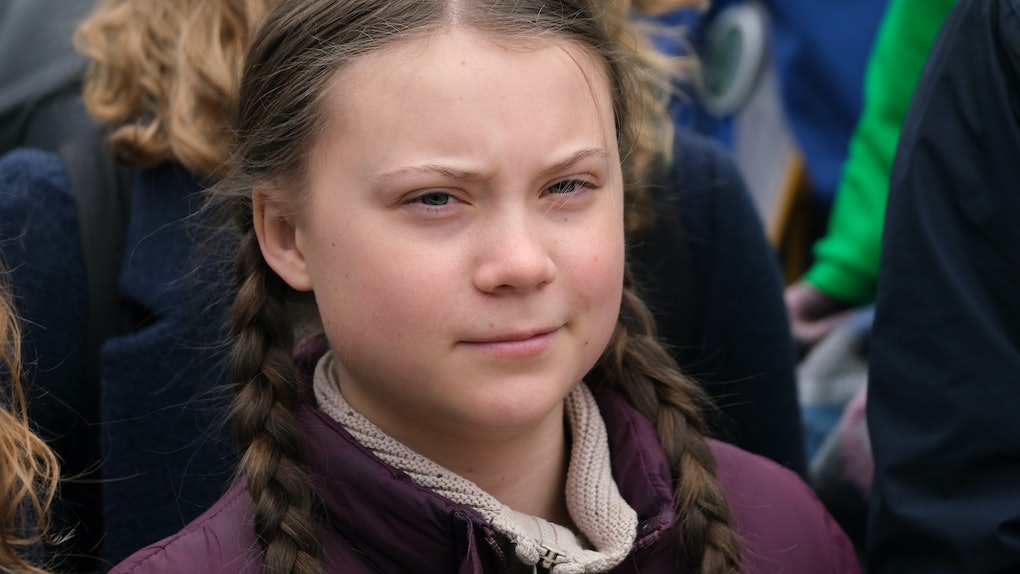 Kim Kardashian's Quotes About Greta Thunberg Are Filled With Admiration

Since 16-year-old Greta Thunberg gave an intense speech about climate change at the United Nations on Monday, Sept. 23, people have been talking about the teenager from Sweden. She has inspired many Gen Z-ers to really think hard about what it will take to defend our planet, despite the conflicting opinions of some adults. But aside from her own generation, Thunberg has inspired many others, including Kim Kardashian — and Kim Kardashian's quotes about Greta Thunberg are filled with admiration for the young activist.

On Oct. 8, Kim Kardashian spoke to Reuters about the teenager who has been outspoken about the climate crisis. Kardashian, the 38-year-old reality TV celeb, seems to highly admire the fierce activism coming from someone so young.

In an exclusive interview with Reuters, Kardashian told the publication that she thinks Greta Thunberg is a "brave and amazing young woman." Kardashian was attending the World Congress on Information Technology in Armenia and Reuters was able to get her opinion on Thunberg and climate change, which the celeb admitted is "a serious problem."

Continuing her praise for the activist, she shared:

[Thunberg] is such an amazing young girl, and so brave and courageous to stand up to these grown-ups that can be very scary and for her to be so open and honest is exactly what we need.

A serious problem, indeed, but Kardashian seems to think that Thunberg's passionate approach may be "exactly what we need." And since Kim Kardashian is a mom of four, she also mentioned what she would love to ask Thunberg's parents about, according to The Independent.

Kardashian said she'd like to ask Thunberg's parents if the young teen "always [had] that in her" and how they "support her in being who she wants to be knowing that speaking on a big platform invites a lot of different opinions and personalities." Obviously, Kardashian knows a lot about being in the spotlight and the repercussions it can have for someone's personal life, especially as a mother of young children in the public eye, so it make sense that she is wondering exactly how Greta Thunberg's parents are dealing with their daughter's launch to world recognition.

On Sept. 23, 2019 Greta Thunberg's powerful speech stole the attention of viewers. There were also a slew of tweets about Greta Thunberg's climate change speech that proved just how much of an impact this young girl made when she took the podium at the U.N. Thunberg didn't hide any of her feelings when addressing international leaders, saying, "This is all wrong. I shouldn’t be up here. I should be in school on the other side of the ocean. Yet you come to us young people for hope." She went on to tell her elders that they had "stolen [her] dreams and [her] childhood with [their] empty words."

Thunberg was not afraid to take a stand against some of the most powerful leaders at the U.N., pointing out that, according to the activist, the current emissions levels could cause the "remaining CO2 budget" to dwindle to nothing in "less than 8 and a half years." The 16-year-old was strong in her stance, and many are left inspired by Thunberg's U.N. speech. Even President Barack Obama met with Thunberg, calling her "one of our planet’s greatest advocates."

But, of course, some have criticized her, including Russian President Vladimir Putin, who recently said, "Nobody explained to Greta that the modern world is complicated and complex," per BBC. Thunberg responded in the best way a 16-year-old knows how, trolling on Twitter. Shortly after the comments, she changed her Twitter bio to "a kind but poorly informed teenager," according to Newsweek.

What the naysayers may be overlooking is the sheer horror the younger generations face knowing that the world as we know it could be on its way to irreversible climate damage. However, with notable public figures continuing to take notice and applaud her efforts, there's a good chance the conversation will keep moving forward — hopefully toward a solution.