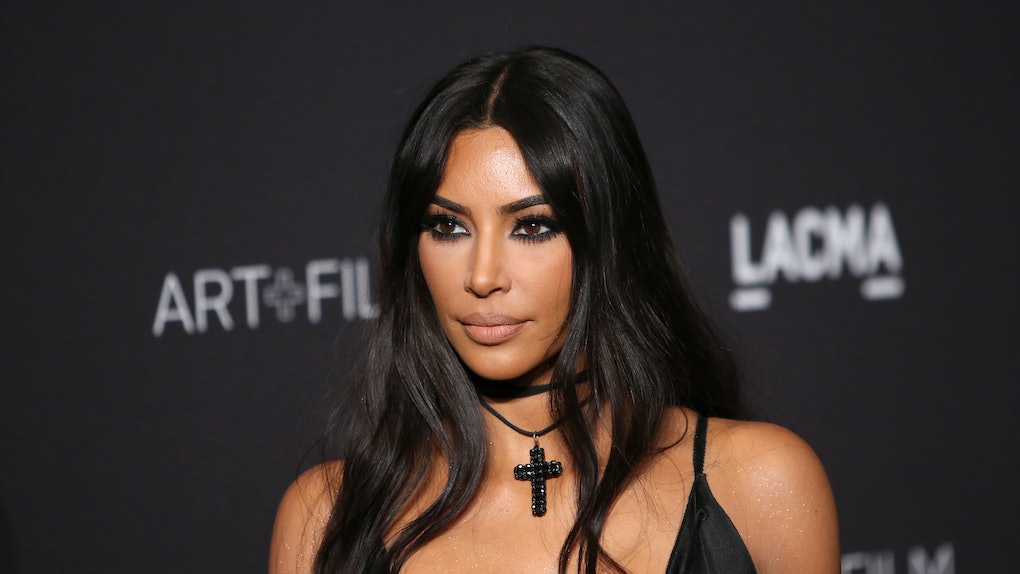 Kim Kardashian is a mother of four! The mama is in the habit of posting a bunch of photos of her four kiddos — North, Saint, Chi, and Psalm — to her Instagram, and fans live for her updates on the little ones. Psalm West is the most recent addition to the Kardashian-West family empire. Born on May 9, 2019, Kardashian has posted only a handful of photos of the little one since he arrived. But Kim Kardashian's photo of Saint and Psalm West cuddling is the latest, and cutest, of the bunch.

Kardashian posted the photo to her Instagram on Sunday, July 14. It showed Saint West (3) laying on a white bed with his little brother tucked under his arm.

"Saint asked me to take a pic of him and his brother this morning," she said in her caption. Saint, according to Kardashian in her Vogue 73 questions video, was apparently super excited to have a baby brother. (Like his older sister, Chicago, Psalm was born via surrogate.)

"Who's most excited for baby brother?! You?" Kardashian asks her son in the video. "I think North is, too, 'cause Saint will have someone to play with instead of her. And Saint wants to name him Sainty Two, right?"

I doubt they actually call Psalm "Sainty Two" as a nickname, but oh my god, if this picture isn't adorable.

Friends and family of the Wests have flooded the comments section of this post with sweet messages.

"He's so happy. Look at him holding his baby brother! Just what he wanted," model Winnie Harlow commented.

Before this photo of The Brothers West, Kardashian had posted a sweet shot of Psalm smiling to the camera on Instagram.

"I meannnnn my baby Psalm is so sweet!!!" her caption read.

The first photo the world got to see of Saint and Psalm together was posted on June 17.

It showed Kardashian holding little Psalm in her arms, and Saint holding his little brother's face in his hands as he leaned over to look at him.

Another photo of the little one came earlier in June, when Kardashian posted a sweet photo of Psalm napping.

The caption was a simple, "Psalm."

And of course, Kardashian debuted her and Kanye West's fourth child via a screenshot of their Mother's Day text conversation.

"Beautiful Mother's Day," West's text to Kardashian reads. "With the arrival of our fourth child, we are blessed beyond measure. We have everything we need." The photo showed Psalm sleeping in his crib.

When he was born, Kardashian let the world know via Twitter as well.

"He’s also Chicago’s twin lol I’m sure he will change a lot but now he looks just like her," she said in a follow-up tweet.

It looks like things at the West home are pretty blissful now that Psalm has arrived! North can play with Chicago, Saint can play with Psalm, and we can hope Kim posts pictures of it.