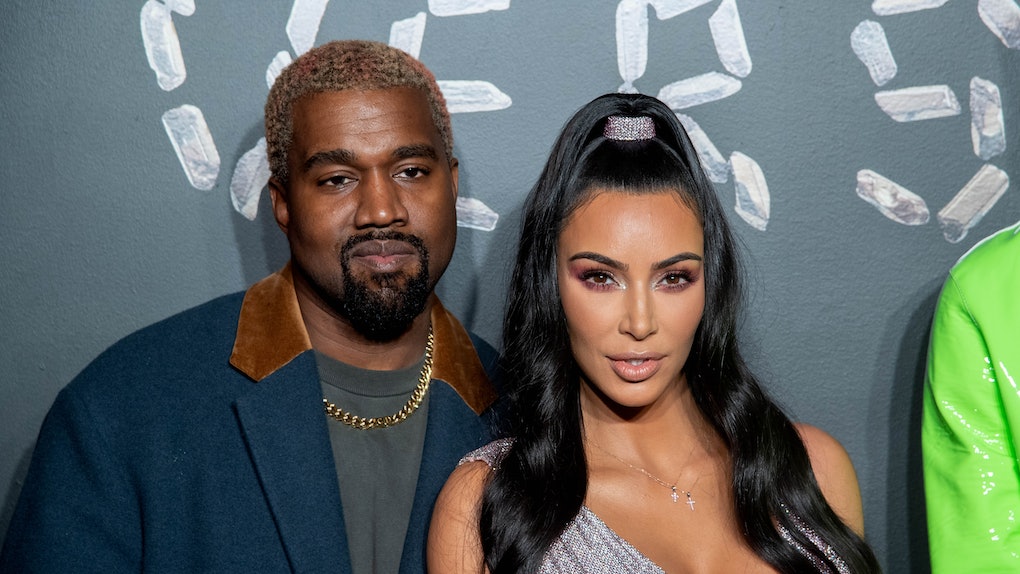 When you think of power couples in the celebrity world, what pair does your mind go to? I immediately think of Kim and Kanye. I mean, besides the fact that their names go perfectly together, they're both huge in the pop culture world. You can't deny it. Everybody knows Kim Kardashian and Kanye West — or at least they think they know them. On a new episode of The Tonight Show Starring Jimmy Fallon, Kardashian spilled secrets about her relationship with Kanye West in a round of "Show Me Your Phone." Kardashian had to show everyone the last text messages she exchanged with her husband and they were so sweet. Kim Kardashian's last text from Kanye West about Wyoming will make you say #relationshipgoals.

If you don't know how "Show Me Your Phone" works, basically, the players take turns pressing a button that randomly selects an app from their phone. Whatever app they get, the player must reveal something from it. Sounds exciting, right? Well, because Kim Kardashian was the show's guest, she went first. Kardashian landed on the text messaging app and she was asked to show the last text messages between her and her husband Kanye West. Kardashian's eyes immediately went wide and she said, "Oh my God!" (What are you hiding, Kim? Tell us!)

If you thought that was scandalous already, Fallon reminded everyone that this was "only the first round," and that's how you knew this game was going to be so good. Kardashian and Fallon also promised they didn't "clean out" their phones beforehand, so everything they were about to reveal was going to be a surprise for them, too. Luckily for them, they weren't hiding anything too scandalous on their phones.

Kardashian told the audience, "You ready? It's fine. It's so sweet."

But before she even got to show the audience her messages, she pulled her phone away since at that exact moment, Kardashian got a text from her sister Kylie Jenner. Kardashian screamed and immediately hid her phone from everyone.

Check out her reaction:

I felt so anxious for Kim Kardashian at that moment. Having someone accidentally read a private text can be so embarrassing, now imagine that but with millions of viewers watching from home. Yikes.

Thankfully, nobody saw anything, so Kardashian got back to revealing her last text messages with Kanye West. She showed everyone a picture of a ranch, along with messages from West that read, "West Lake. The first ranch in our family. 50 years from now this will mean so much to us." Aww!

She then told everyone what the picture and text messages meant.

"He got a ranch in Wyoming and … there’s something that’s called West Lake. So he took a picture of it and that’s like, a sign. He’s so excited to maybe be moving to Wyoming. Well, not full time," she explained.

Talk about spilling secrets! To see Kardashian and West's texts, you can watch the video below.

Like I said, Kim and Kanye are #relationshipgoals and it would be really nice for them to take a breather and move somewhere away from all the busyness of LA (where the couple currently lives with their four children). I seriously hope they get the ranch because it sounds absolutely heavenly.

More like this
Kim Kardashian's Response To Claims She Smuggled An Ancient Sculpture Is A Lot To Take In
By Brandy Robidoux
Lil Nas X's Quotes About Alienating Straight Fans With "Montero" Are All About Authenticity
By Brandy Robidoux
Meghan Markle's 'The Bench' Children's Book Was Inspired By Prince Harry In The Sweetest Way
By Sydney N. Sweeney
Stay up to date