Picasso would be proud. Kim Kardashian's Instagram defending North West's painting didn't hold back at all, proving that North did, in fact, paint a Bob Ross-inspired landscape. Internet trolls will believe whatever they want, but honestly, why doubt the talents of a child whose parents are two arts moguls?

Kim's recent Instagram posts about her 7-year-old's latest art project garnered a ton of speculation across social media, with many users refusing to believe North created such an intricate masterpiece. When your mom and dad are Kim Kardashian and Kanye West, however, creativity is definitely encouraged at a young age. Remember North's iconic song at her father's Yeezy fashion show? She's got talent in her genes.

"Don't play with me when it comes to my children!" Kim wrote in all-caps in a Feb, 9 Instagram story post. "My daughter and her best friend have been taking a serious oil painting class where their talents and creativity are being encouraged and nurtured. North worked incredibly hard on her painting which took several weeks to complete. As a proud mom, I wanted to share her work with everyone."

The internet can be a cruel place, and unfortunately, when you're Kim Kardashian, the spotlight is on everything you (or your kids) do. Rampant speculation as to the painting's origin was bound to happen, but the backlash and negativity was super unnecessary, especially considering that several TikTokers have posted proof claiming North was capable of painting the portrait.

"My mom taught me how to paint this and she taught North how to paint the same one two weeks ago," TikTok user @camrynfred posted a video showing off a very similar picture to the one North painted in class. North's art teacher's daughter actually posted receipts proving not only that the creation was made by North, but that it's a staple lesson of her mother's art class.

Kim went on to post quite a few Instagram stories about the entire situation, including headlines from The Guardian which originally doubted the origin of North's painting. "FOH," Kim wrote over a tweet speculating even further about her daughter's talents. 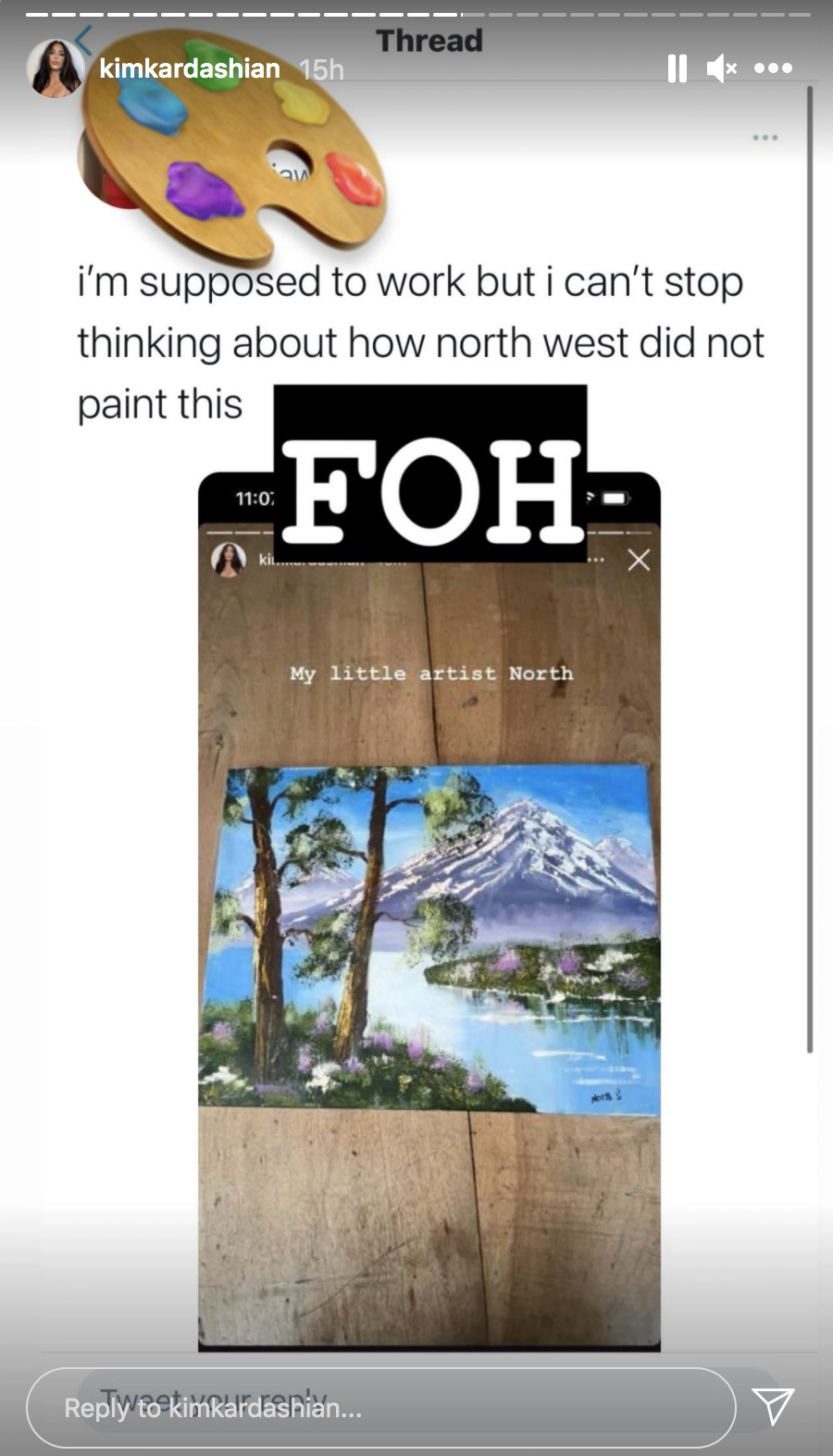 Seriously, this entire situation definitely brought out a side of the Skims' founder that the public rarely gets to see. When it comes to her kids, though, she never keeps quiet. Hopefully North didn't have to see any of the negativity about her painting skills, because they're flawless. Now, all Kim needs to do is secure North a Bob Ross-style program of her own to teach internet trolls how to replicate her artistry.