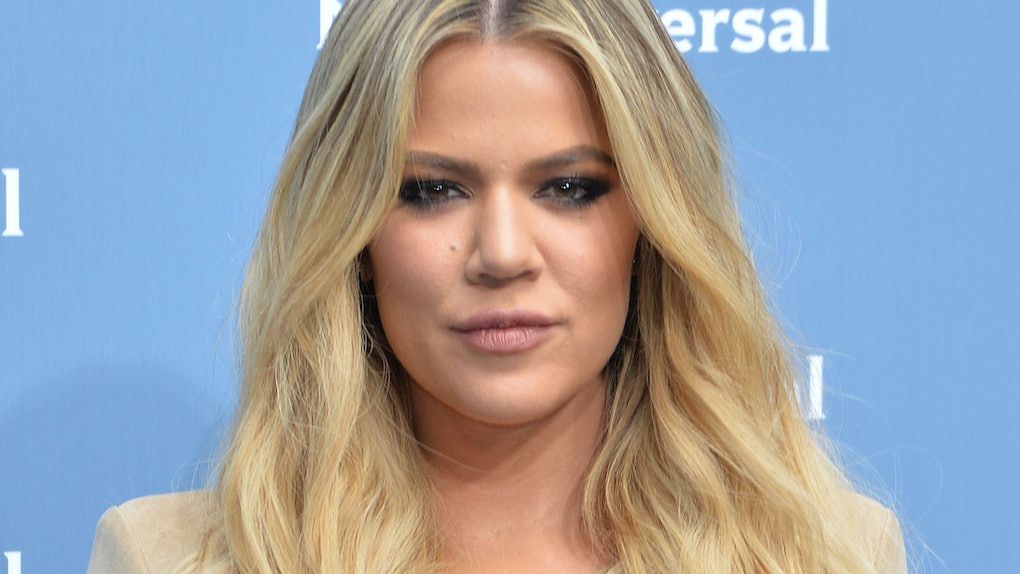 Now that Khloé Kardashian is back in California after a long stay in Cleveland with boyfriend Tristan Thompson, lots of family shenanigans are underway. For those of you not in the know, Kardashian recently brought her daughter True back home to Calabasas, the place she usually calls home. And she’s spending every bit of free time with her family, including her nieces and nephews. Thanks to Snapchat, Khloé Kardashian's videos of True with Penelope and Mason are out there for everyone to see. And they’re so adorable.

Kardashian shared her videos on her Snapchat story on Wednesday, July 11, and fans are going pretty wild over them. And for good reason, too.

In several super cute videos, Kardashian gave fans a glimpse of what life as a Kardashian kid is like. And let me tell you, it’s all about being a good cousin to the younger ones in the Kardashian clan.

In the videos, you can see Kardashian sharing some sweet moments with little True.

“Look at this gorgeous little mama,” Kardashian coos in one video.

Then, she passes the baby over to Kourtney Kardashian’s daughter Penelope. Well, Penelope kind of steals True away from Kardashian, which is so sweet and shows how much she loves her new baby cousin.

Look at this cutie and her mom!

“I’m going to steal her for baby class,” Penelope says. At this, Kardashian feigns shock for the camera. So funny!

Then in another video, you can see Penelope holding baby True in her lap as the family (including Kourtney) listens to kids’ tunes during a sing-along at baby class. Later, Rob Kardashian’s daughter, Dream, makes an appearance. She appears to be dancing and tossing some balls around with her playmates.

“Baby class is poppin!!!!” Kardashian wrote in a caption on the video.

In another part of the video, you can see Penelope’s older brother Mason taking center stage and being extra adorable on camera.

Kardashian sure loves those Snapchat filters. They’re so cute, though!

It’s genuinely such an adorable video compilation and really shows how much the Kardashians (of all generations) love each other. Gotta love it!

Baby True is hamming it up for the camera:

Honestly, is that not the sweetest little baby you've ever seen? She's so cute and Kardashian is clearly in love with her, which is a given. It's also wonderful that the rest of the Kardashian family is so close-knit and involved.

While the family love is definitely strong, it’s not always easy for them to constantly be associated with one another. Case in point: Kylie Jenner recently deleted an Instagram photo in which she looks almost exactly like her sister Khloé. Although Kardashian made light of the situation by adding comments like “Khloé is that you??” and “When did I do this shoot?”, Jenner felt it necessary to delete the post.

In the pic, Jenner has blonde locks and is wearing a pink bodysuit while sprawling out over a bed of bananas. Seriously.

The pic is definitely Khloé-esque, but I wouldn’t say they look exactly alike. As with all siblings, there are similarities and that’s not necessarily a bad thing.

Jenner hasn’t specified why she deleted the pic. Perhaps the intense fan reaction got under her skin a little, which is understandable. It can be tiresome being compared to your siblings all the time. Still, the picture remains up on the official Kylie Cosmetics Instagram account.

At least the Kardashian-Jenner fam is all about love, no matter what the fans say. And Jenner comparisons aside, Kardashian is proving that every single time she posts pics and videos of baby True on social media.