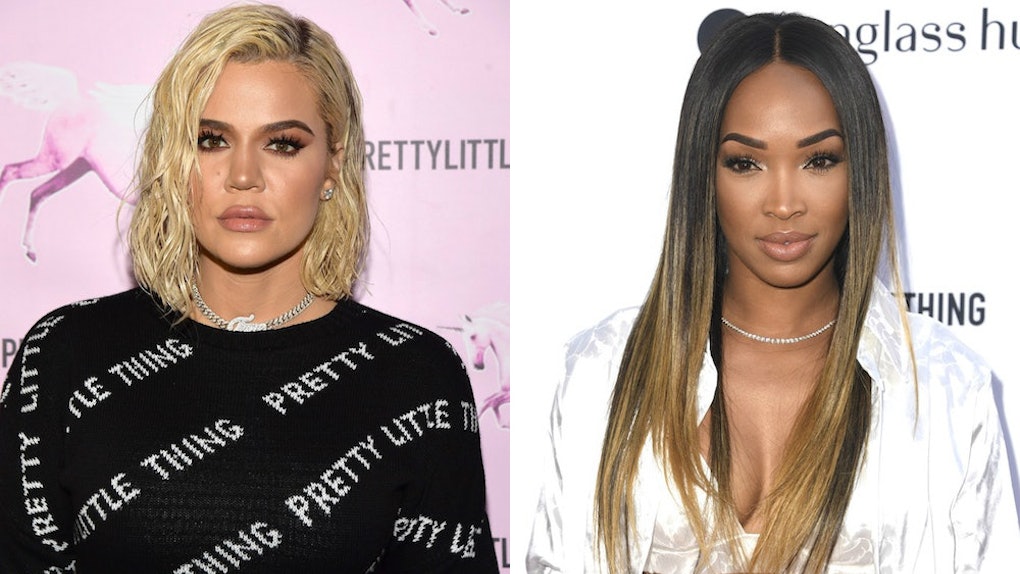 Anyone who actually manages to keep up with the Kardashians knows that Khloé has gone through a lot this past year. Despite the fact she gave birth to beautiful baby girl True a year ago, the TV personality's ex-boyfriend and father to her 1-year-old, Tristian Thompson, reportedly cheated with Kylie Jenner's former BFF, Jordyn Woods, according to reports that came out all the way back in February 2019. (Woods denied hooking up with Thompson at the time.) So, the TV personality, fitness model, and entrepreneur has endured quite a bit in these last few months. That being said, Khloé Kardashian's recent comments on her friendship with Malika are definitely reassuring.

On Friday, June 21, Khloé took to Instagram to honor one of her longtime best friends, Malika Haqq. The photo shows the two of them posing together on some sort of photo shoot set, looking absolutely incredible (as per usual, of course). Khloé's caption read, "Work day with my BFF. Not a bad day." Then, she went on to address one of the comments by Instagram user @queenmolie0, which read, "the only friendship we trust." Khloé gratefully responded, "same," which was highlighted by entertainment IG account @commentsbycelebs. Definitely a look at the photo she posted, below — it's so heartwarming.

Anyway, it's great to see Khloé maintaining such a strong relationship with her gal pals. She posted the photo just a few days prior to the latest episode of Keeping Up with the Kardashians, when Khloé will address the notorious reported cheating scandal between Woods and Thompson, according to People.

It's good to know Khloé agrees Haqq is trustworthy, because in a preview clip from Sunday's June 23 KUWTK finale, Khloé shares how she never expected the reported scandal between Thompson and Woods, mostly because she didn't think Woods was capable of it. While talking to Kylie and Kim in the clip, Khloé shares, "I knew who he was. I never in a million years thought that's who she was."

Haqq has been there for Khloé from the very beginning, especially in regards to the reported cheating scandal. Back in February 2019, when news of Thompson and Woods' infamous party night was everywhere, Haqq posted a quote on Instagram that said: "The most important promise you can keep is a promise to yourself." And when someone took to the comments, praising Haqq for being open about her own mistakes and being there for her friend Haqq responded:

I've been wrong before and I'll be wrong again but I damn sure wouldn't make excuses (alcohol) in an interview to gain self pity and save face. No one in my life would condone that coward like behavior.

But the gal pal support goes both ways. Back in August 2018, according to Cosmopolitan, someone commented on one of Malika's Instagram posts, saying: "GIRL BYE!!!!! If it wasn't for Khloé you would be a nobody... wait who are you agin 🤔🤔🤔🤔" to which Khloé reportedly responded, "We are all entitled to our own opinions. And yes, love, you may have yours. But no need to be cruel when life is negative enough. But if it wasn't for Malika then who knows where I would be emotionally. She's been my BFF since we were children. Loyalty and love means more to me than anything else ever could. Fame is fleeting. Malika is not." Kweens.

Clearly Khloé and Haqq have an incredible bond. And, seeing Khloé recognizing her close friendship with Haqq on Instagram seriously says a lot. My heart goes out to Khloé in regards to speaking about her relationship troubles on the upcoming KUWTK episode... it's bound to be a tough one for her.