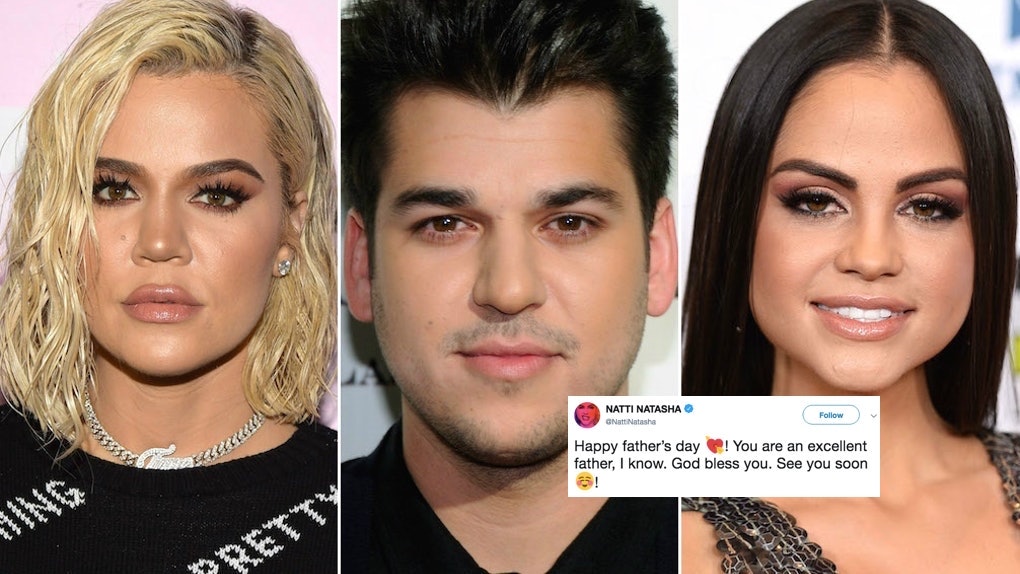 Rob Kardashian might be having a bit of a romance. The Arthur George creator has been having flirty tweet exchanges with Dominican singer Natti Natasha, prompting some people to wonder what the nature of their relationship is — even Khloé Kardashian. Khloé Kardashian's reaction to Natti Natasha's Father's Day tweet to Rob is honestly, the exact reaction I had. What is going on between these two?

To clue y'all in, Natti Natasha is a Dominican singer. She has a handful of music videos on YouTube that have billions of views (literally, billions), so no need to question her musical success. Rob Kardashian has tweeted one of her music videos before, saying the track featured in the tweet was one of his favorite songs, so these two seem to have some kind of thing going on. Maybe it's a new friendship, maybe they're into each other. Either way, Khloé Kardashian was going to find out.

Rob had tweeted a throwback photo of him and daughter Dream Kardashian saying, "Happy Father's Day to me." Natasha quoted the tweet and said, "Happy father’s day 💘! You are an excellent father, I know. God bless you. See you soon ☺️!"

Rob quoted his sister's tweet saying, "Do I know you?" Oh, so now he's playing coy.

"Listen just slow yourself down I’m trying to watch the Dodgers game," Rob tweeted back.

"Coming over then. I'll see you soon," Khloé said decidedly.

"Pop off then!" Rob said. And thus concluded this tweet thread.

It's not at all clear what the nature of Rob and Natasha's relationship is. Rob did, however, retweet a selfie Natasha posted on June 3 that showed her posing topless in a mirror — her hair and phone helping to keep the photo somewhat safe for work.

A look through Natasha's liked tweets on her profile shows that she liked Rob's "Oh hi."

She also liked this June 12 tweet from Rob, where he retweeted a clip from one of her music videos saying it was his favorite song.

Natasha tweeted a video to Rob that shows her saying hey. Another man filmed the video. Rob jokingly tweeted back "Don't get too close!" clearly referencing the man in the video.

His tweet was written in Spanish (with some grammatical errors), but it basically translates to back up.

So, it looks like Rob Kardashian and Nati Natasha might be in a bit of a flirtatious relationship. Neither of the two has commented on the nature of their relationship, but their tweets are definitely flirty as hell. And she apparently knows enough about his parenting skills to feel he's a good father. We'll see what future tweets reveal about these two. Whatever it is, Khloé's going to get to the bottom of it.