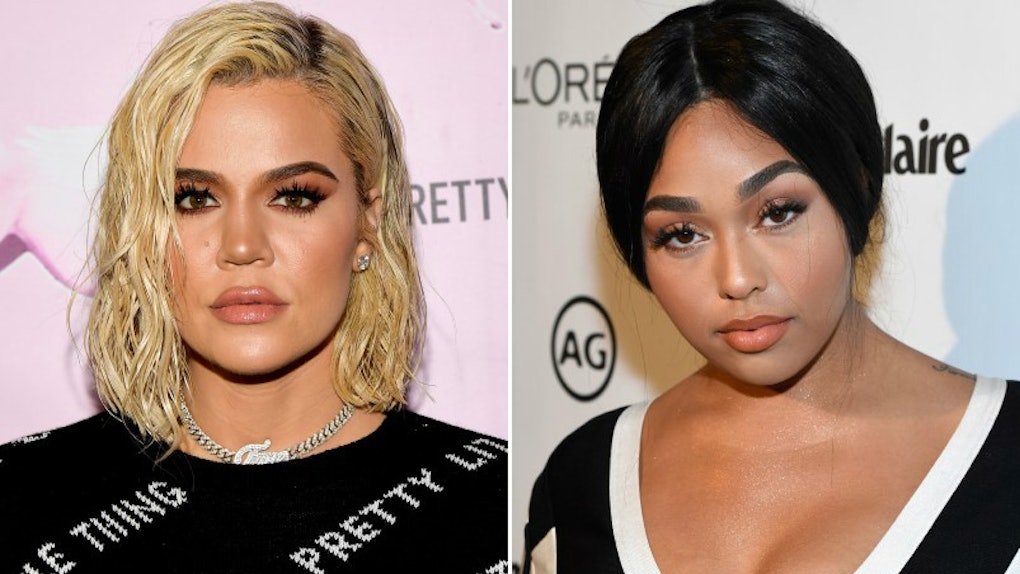 Ever since news broke that Jordyn Woods possibly hooked up with Tristan Thompson, the world has been waiting for Khloé Kardashian’s reaction to the situation. While the Keeping Up With The Kardashians star has liked tweets and left Instagram comments that point in a general direction, no one really knows what’s going on beneath the surface. But Woods just gave Kardashian yet another opportunity to say something thanks to her appearance on Red Table Talk. And Khloé Kardashian’s reaction to Jordyn Woods’ Red Table Talk interview is exactly what you’d expect!

Elite Daily reached out Jordyn Woods' team following Khloé's public reaction on Twitter, but did not hear back by the time of publication.

Before I get into Kardashian’s tweet about the interview, let’s talk a little bit about the interview itself. The first thing you should know is that Woods addressed some of the rumors about Thompson, and she ultimately denied the reports that they hooked up.

The overarching message Woods provided during the interview was that, while it may seem like she took things too far with Thompson, they didn't do anything more than kiss before Woods left his home. She does tell host Jada Pinkett Smith that she ultimately regrets going to the house party, but vehemently denies any real wrongdoing in terms of whether or not she did "anything intimate" with Thompson. She did, however, take responsibility for the actions that got her into the whole ordeal itself, such as going to his party and sitting closely next to Thompson on a couch.

But naturally, Khloé Kardashian had something to say about the interview, and took to Twitter to react. To be honest, it was a lot, because she seems unwilling to believe that Woods' side of the story is even remotely true. She accused Woods of lying, adding that Woods has yet to even speak with Kardashian privately about the ordeal. She wrote,

Tristan is equally to blame but Tristan is the father of my child. Regardless of what he does to me I won’t do that to my daughter. He has been addressing this situation PRIVATELY. If Tristan were to lie publicly about what conspired,then yes I would address him publicly as well

I think it was very important for Khloé to share this information with her fans, since many people have been wondering why Woods has been getting so much flack for the reported hookup, but there's been very little said about Thompson.

As for Thompson himself, well, he’s still out of the picture as far as Kardashian is concerned. That’s not surprising when you consider that this is the second time he’s been accused on cheating on Kardashian ...in under a year! It’s sad, but Kardashian probably feels a weight lifted from her shoulders now that she doesn’t have to worry about him anymore. Actually, a recent report from People basically confirmed that Kardashian is more content without Thompson around.

“She’s very happy to know that so many people root for her,” a source told People on Feb. 28. “She’s doing well. She seems happier and is in a very good place as a working mom. She feels very lucky to have such an amazing support system. She has been spending a lot of time with [mom] Kris [Jenner].”

So, even though this whole situation is unfortunate, especially for Thompson and Kardashian’s daughter True, it has its upsides. Sure, Kardashian lost a boyfriend and Woods lost a friend, but it seems like things were going to come to a head eventually. It just happened sooner than people expected and that’s OK.