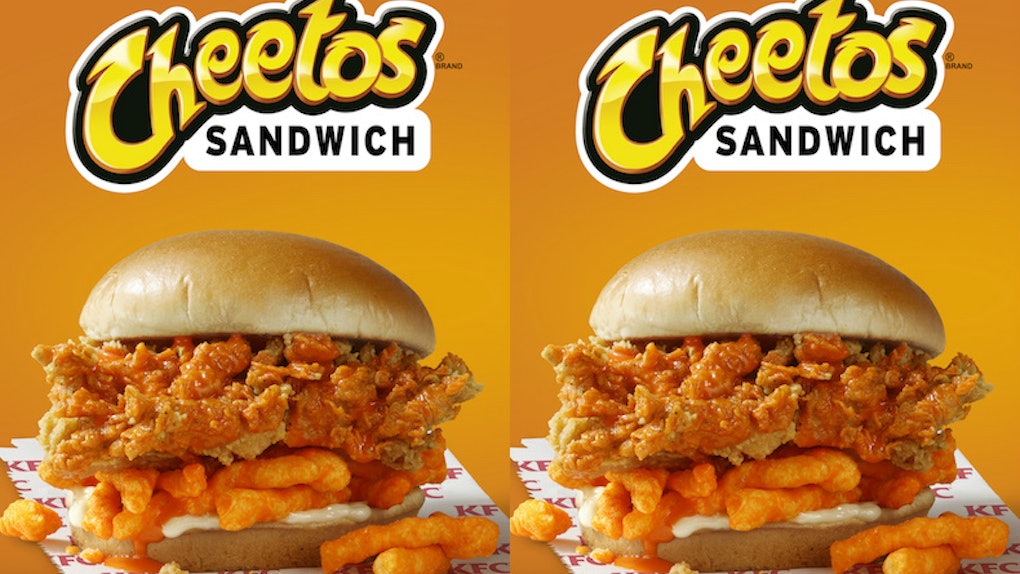 Cheetos fans should get excited, because KFC's Cheetos Chicken Sandwich is reportedly being tested in states across the nation. Yes, you read that correctly: Cheetos Chicken Sandwich. Apparently, the cheesy delicacy is being offered in select areas throughout the United States, which means it might be time for a road trip. But before you grab your car keys in pursuit of the new dish, you're probably curious about what the sandwich is made of. Are there actual Cheetos involved, or does the chicken just taste like 'em? If you have questions, read on — because I found answers.

According to KFC, the Cheetos Chicken Sandwich is made by "coating a juicy, hand-breaded Extra Crispy chicken filet with special Cheetos sauce and placing it on a toasted bun with mayo and a layer of crunchy Cheetos."

EARLIER: Believe it or not, Cheetos are without a doubt used in the sandwich along with Cheetos-flavored sauce, per Bustle. More specifically, KFC's Cheetos Chicken Sandwich is made with Extra Crispy chicken that's coated with Cheetos sauce. Then, that chicken is then placed between two pieces of bread along with a layer of actual Cheetos. Mayo is also slathered onto the bun to finish the sandwich off (naturally). Elite Daily reached out to KFC for more information about the snack's ingredients, but has not heard back by the time of publication. However, I'm already convinced that it's delicious.

I mean, just look at it. I'm basically drooling RN.

If you agree, you might be wondering where you can have a bite. Depending on where you live, though, finding a sandwich might be tough (sigh). According to Bustle, three states are currently testing the cheesy delicacy for a limited time. Apparently, those states include North Carolina (Greensboro and Raleigh), Virginia (Roanoke and Richmond), and Georgia (Greenville). Apparently, select locations throughout those cities began testing the Cheetos Chicken Sandwich on Tuesday, Jan. 29 — so if you haven't tried it yet, you still have time. Elite Daily reached out to KFC and asked how long the sandwich will be available for, but has not heard back by the time of publication.

Based off of the fact that the limited-time Cheetos Chicken Sandwich hit select menus to recently, I'm hoping it'll be available for at least a few more weeks (a girl can dream, can't she?). With that being said, go ahead and order one. Who knows, if customers like the sandwich enough, maybe KFC will debut the Cheetos-inspired dish on its nationwide menu. If that happens, I'll definitely be eating them on the reg.

Let's face it: Between Cheetos and KFC chicken, what more could you ask for?

If your local KFC isn't selling Cheetos Chicken Sandwiches, don't fret; you can still get in on the fun. However, the "fun" I'm about to bring to your attention doesn't involve eating. Instead, it involves Colonel Sanders collectibles that KFC fans can proudly display in their kitchens. I'm talking about Funko Pop!'s Colonel Sanders figures, which went on sale at the end of January. The collectible items feature KFC's mascot holding either his cane or a bucket of fried chicken — and they can be purchased on Amazon or Funko Pop!'s website, depending on which one you choose.

Whether you plan on grabbing a Cheetos Chicken Sandwich or a collectible Colonel Sanders, KFC has you covered.