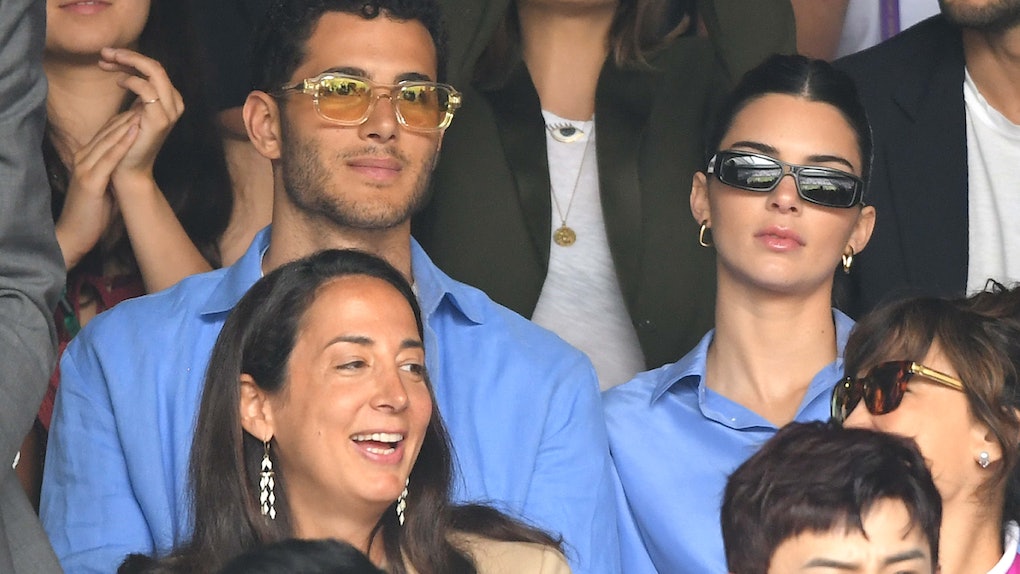 Sorry Kim Kardashian West, but Kendall Jenner's Instagram caption about starting a family with Fai Khadra might just break the internet for a second time. Kendall, who's no stranger to trolling herself on social media for being the only one of her siblings without children, took to Instagram on Nov. 24 to post a carousel of photos of herself playing with her nephews Saint and Psalm West. The last photo in the carousel was a mirror selfie taken by none other than Fai Khadra, her date to Justin Bieber and Hailey Baldwin's wedding. In the mirror selfie, a smiling Fai snapped a pic of himself standing alongside an equally smiley Kendall as she held her nephew Psalm.

They looked like a happy family in the pics, so Kendall decided to stir the pot by captioning the series of images:

It turns out people really want Kendall to start a family with Fai. And I'm not just talking fans; I'm talking pretty much every single person in Kendall's inner circle. "I," wrote Kris Jenner, alongside a heart-eye emoji. "I," Kylie Jenner simply wrote. Kim played it a little less cool than her mom and younger sister by pairing her "I" with a long series of exclamation points, "I!!!!!"

Their friends also got in on the fun, voicing all kinds of support for them in the comments. "I already feel like you guys are my parents when we hang out so, I," wrote Kylie's former tutor Tiffany Sorya. Kendall's pal Gigi Hadid made it clear she's def down for Kendall and Fai to start making babies by simply commenting an eye emoji (get it?). Singer Justine Skye didn't exactly say "I," but she made it clear she was down by writing, "I love this story." Finally, my favorite series (yes, series!) of comments has to be from Kendall's BFF Hailey Baldwin, who played it even less cool than Kim did. "IIIIIII," she wrote in the first caption, because obvi just one "I" was not enough. "MEEEEE," she wrote in the second. "I SAY YES," she wrote in the third, in case people weren't clear on where she stands on the matter. "I DOOO," she concluded in the fourth for good measure.

Luckily for all of us, the @commentsbycelebs account (which also commented "I" on Kendall's pics) managed to capture some of the best comments for all of us to see here:

While it's unclear whether or not Kendall and Fai are dating or just really close friends, there's no doubt that the two definitely partake in their fair share of couple-y activities, from hitting up weddings together to dressing up in couples costumes for Halloween. (Elite Daily previously reached out to reps for Kendall and Fai for comment on their relationship status, but did not hear back in time for publication.)

That being said, even if they are dating, Kendall's probably not going to be itching to share that info with the world any time soon. “I’m very young and right now I feel like relationships aren’t always super-certain and I don’t want to bring too much attention to something if you don’t really know long term [what it’s going to be]," she told Vogue Australia in an interview published shortly before news of her split from Ben Simmons broke in May. "A relationship is only meant to be between two people, and the second you make it the world’s business is when it starts messing with the two people mentally. Like once everyone is let in, you’re letting all these opinions into your relationships, and I don’t think that’s fair.”

While her friends and family seem to be super down for Kendall to start having babies with Fai ASAP, the 24-year-old supermodel made it clear in a 2018 interview with Vogue that she doesn't want to have kids until she's "28 or 29." So in other words, don't expect her to take all those Instagram comments seriously.