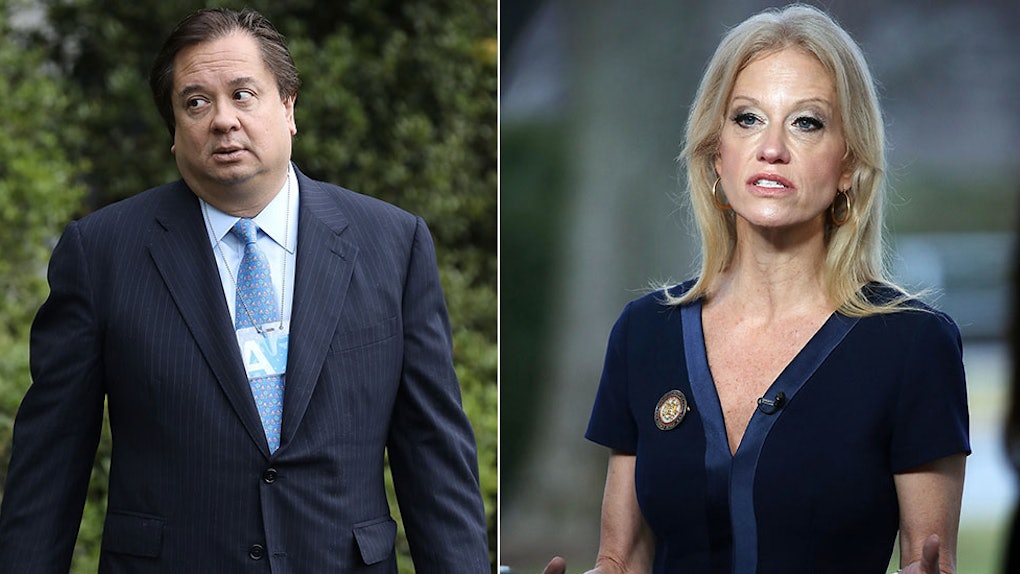 On Tuesday morning, April 10, President Donald Trump tweeted two seemingly angry responses to news that the FBI raided the office of his personal attorney, Michael Cohen. That much was expected, especially given Trump's history of using morning tweets to react to news that has developed the night before. What wasn't expected was that Kellyanne Conway's husband would tweet back at Trump, with a response that was subtle yet shady.

It all started when President Trump tweeted a simple message in apparent frustration: "Attorney–client privilege is dead!"

George Conway, Kellyanne's husband, then responded about 40 minutes later with a tweet that didn't even include any words of his own. Instead, the tweet featured a link to a page on the U.S. Department of Justice's website, which outlines the basics on the federal government searching the premises of an attorney.

There are occasions when effective law enforcement may require the issuance of a search warrant for the premises of an attorney who is a subject of an investigation, and who also is or may be engaged in the practice of law on behalf of clients. Because of the potential effects of this type of search on legitimate attorney-client relationships and because of the possibility that, during such a search, the government may encounter material protected by a legitimate claim of privilege, it is important that close control be exercised over this type of search.

The page then goes on to outline the number of measures that U.S. attorneys must go through before conducting a search like the one the FBI did on Cohen's office on Monday, April 9.

In other words, in response to Trump insinuating that the the search of Cohen's office was improper, George Conway responded with the basics of law outlined by the Justice Department that the president oversees.

Oh, and George Conway just happens to be the husband of the president's counselor and former campaign manager.

For the record, Stephen Ryan, an attorney for Cohen, said in a statement that a search by the U.S. Attorney's office for the Southern District of New York "resulted in the unnecessary seizure of protected attorney client communications between a lawyer and his clients. These government tactics are also wrong because Mr. Cohen has cooperated completely with all government entities, including providing thousands of non-privileged documents to the Congress and sitting for depositions under oath."

This isn't George Conway's first rodeo, by the way. George, who himself is an attorney, has quietly grown a reputation for throwing subtle shade at the president over the course of Trump's administration, which is awkward any way you slice it, given Kellyanne Conway's rank within team Trump.

You only need to go back a couple hours prior to George Conway's latest tweet to find what could be considered critical commentary of Trump's president. That particular post was a mere retweet that showed a news headline from the '70s, which details former President Richard Nixon's complaints of a "witch hunt."

Trump has often referred to federal investigations related to his campaign as a witch hunt.

George Conway's Twitter is, in fact, full of retweets and short messages that scrutinize the president, if not outright criticize Trump.

One retweet is of an article that outlines why President Trump's promises of a wall shouldn't be taken seriously. Then there's the retweets of CNN anchor Jake Tapper, where Tapper demonstrates how the president's current rhetoric on foreign policy in Syria contradicts what Trump advised former President Barack Obama years ago.

Then, sometimes, there is short commentary from Conway. In response to a New York Times headline that read, "Trump’s lawyer discussed pardons for 2 ex-top aides last year, suggesting concern about what they might tell the special counsel," Conway tweeted, "This is flabbergasting."

So, if you didn't know, now you know. One of President Trump's, let's say, constructive critics just happens to be a conservative lawyer who's married to one of the most notable names in the White House, Kellyanne Conway.