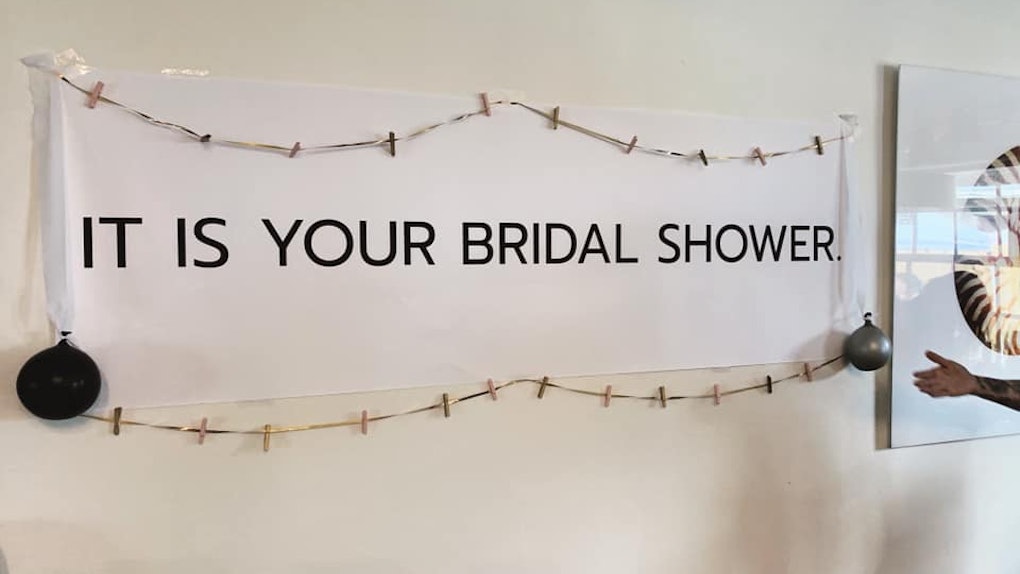 Kayleigh Kill's 'The Office'-Themed Bridal Shower Is So Epic, Even Angela Would Approve

Fans of The Office, prepare to freak out. Kayleigh Kill's 'The Office' themed bridal shower was so perfect, even Angela would freak out over how amazing it was. And I've got all of the incredible deets.

For Kill, 30, a tap room manager at Bangin' Banjo Brewing Company in Florida, The Office plays a special role in her relationship with her fiancé, Ian Carpenter. "When I first started dating my fiancé over six years ago, he introduced it to me," she tells Elite Daily. "I've been obsessed with it ever since. It's always on my television."

Carpenter, on the other hand, has been a huge fan of the show since day one. "He was shocked when he found out I had never watched it," Kill continues. "We both watch it every day and we still laugh at even the silliest of jokes."

She may have been a diehard fan of The Office because of Carpenter, but it was her friends who had the brilliant idea of working the show into her bridal party. "I always knew my bridal party would be themed, since I've never been the type of girl to have a 'make a dress from toilet paper' type [of] party," she explained. "My friends know I have a lot of interests and decided to plan the party based on my favorite show. They told me the theme, and that was it. Everything else was a complete surprise."

And they freaking crushed the surprise. "The details, decor, and games absolutely blew me away," Kill said of the party. "All throughout the party, I would notice details I had missed and get excited all over again. It was one of the best surprises I've ever experienced in my life. My girls did an unreal job and went above and beyond the call of friendship."

What details is she referring to here? Any true fan of The Office would be able to appreciate that her friends didn't miss a single detail.

There was a framed pervert Dwight picture that looked exactly like the one Pam drew.

The mimosa bar was appropriately set up in honor of Meredith.

There were "Serenity" candles by Jan and a creepy picture of babies playing jazz instruments à la Angela.

Obviously, Toby was not allowed.

Forget flower centerpieces. They stayed perfectly on theme with beets that would be worthy of Schrute Farms.

The banner was straight out of the birthday party Jim and Dwight threw for Kelly when they took over the party-planning committee.

And the party wouldn't be complete without a World's Best Bride mug, duh!

Yeah, I told you they crushed it. In fact, they did such a great job with everything that Kill had a hard time deciding what her favorite part of the party was.

"I'm between the beet centerpieces and the Meredith mimosa bar as favorites, but honestly, everything was sheer perfection," she told Elite Daily.

Just can't get enough of this absolutely perfect party? Watch the video below for even more deets: