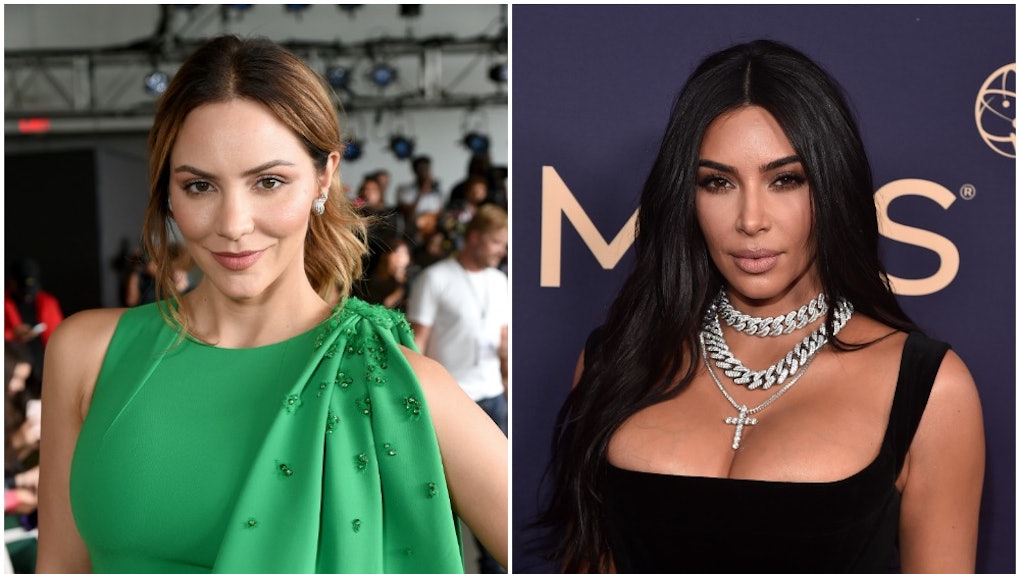 Who knew that Katharine McPhee was so funny?! The newlywed and American Idol alum has me LOL-ing after seeing her Oct. 1 Instagram post, and let me tell you why. First, just let me say that McPhee looks gorgeous in her new swimsuit snapshot. Those abs! Those arms! I can't deal. But it was the caption that really got me going, after realizing Katharine McPhee's Instagram was shading Kim Kardashian. That being said, it was shade in good taste. I bet even Kardashian laughed at this one.

At first glance, one may think that McPhee's latest Insta post has absolutely nothing to do with Kardashian. Other than McPhee's tag, there really is no apparent reference to the reality queen, so I definitely can't blame you. But if you take a closer look, you'll see she definitely took a page out of Kardashian's book with this one.

"David posted this while playing games on my phone," she wrote, referring to her hubby David Foster. "Not sure why or how he chose it but I’m not complaining." Sound familiar? McPhee even went as far as to tag Miss West in the post so there was no mistake as to who she was referencing.

For those who aren't OG fans of Kim K, this one might have gone over your heads. Actually, it did go over fans heads.

"Why would a 60 Year old man being playing games on your phone . Just own it . You look good and you posted a pic," one follower commented, obviously confused.

Don't worry though, McPhee was sure to clear up any confusion. “No. No. Look up an old Kim K tweet! You’ll get it,” she responded with a laughing and crying emoji, as well as a heart.

The post that McPhee referenced is actually super old. Back in 2015, Kardashian posted a steamy bikini snapshot with a caption that read: "North posted this on IG while playing games on my phone. Not sure why or how she chose it but I'm not complaining RP."

Either McPhee has a very good memory or she was spending some time stalking Kardashian's Twitter page, as one does from time to time.

Now, you get it, right? You best believe a bunch of other fans caught on from the start, though, and their responses were absolutely perfect.

"Your Kim K/North reference is lost on the masses, but not on this girl!" one fan chimed in. "I love your sense of humor girl 😊," another praised in a comment.

Truth be told, McPhee is no stranger to shady tweets. The singer-songwriter is one sarcastic lady and is never afraid to broadcast her opinions on social media. Never forget the time she tossed some shade at fellow American Idol contestant Taylor Hicks. Or how about the time she hilariously shaded herself after a Tony Awards flub. Basically, McPhee may be the new queen of Twitter and we've all been sleeping on her. (Watch out Chrissy Teigen!)

Whether her bikini post was shade, or simply a tribute to the KKW Beauty founder, we may never know. But McPhee's got jokes for days and I'm so here for it.