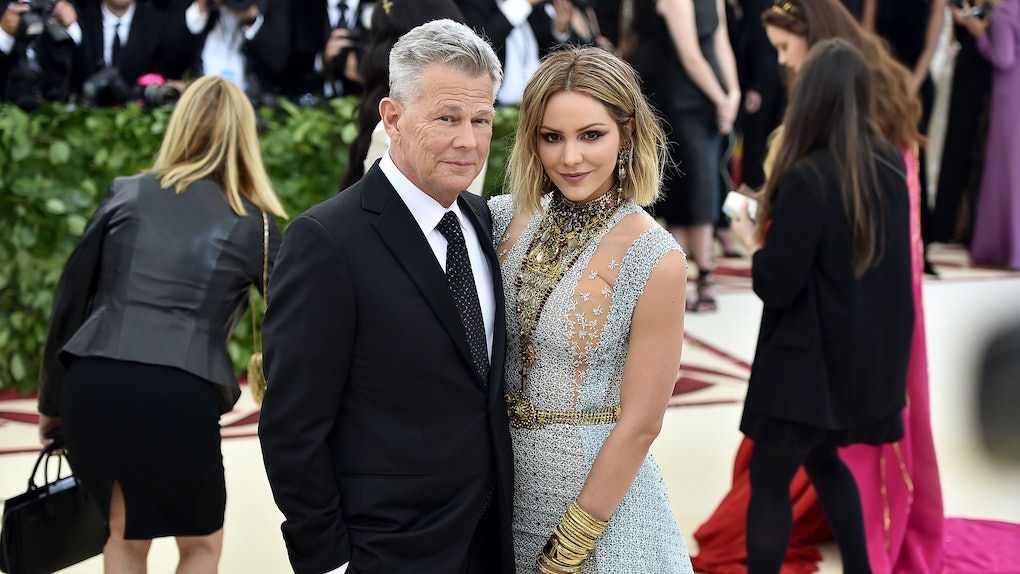 There really must be something in the Hollywood water, right? Seriously, all of the recently announced celebrity engagements make it seem like anyone who isn't engaged is slipping behind. So, looking a little deeper into these relationships is key to understanding them. For instance, Katharine McPhee and David Foster's body language proves that they're totally in love, and their relationship and engagement actually makes a lot of sense.

Now, McPhee and Foster are both fairly private when it comes to their personal lives. In fact, neither one has actually said all that much about the other, or about their relationship. So, I enlisted the help of body language expert, and author of The Power of Body Language, The YES Factor and The Body Language of Dating, Tonya Reiman to break down McPhee's and Foster's body language with each other. Hopefully, we can at least try and make sense of everything that's been going on between the two and their whirlwind romance.

The way their relationship unfolded is actually pretty interesting. For starters, the two met back way back in 2006 when Foster was a mentor on American Idol and McPhee was a contestant. After that, reports of them dating didn't appear until 2017, when they were spotted at dinner together. Later in 2017, Foster's daughter referred to McPhee as her "stepmom." McPhee announced their engagement on Twitter on July 3, and Foster did the same with a sweet Instagram pic of the two. So, what does McPhee and Foster's body language say about their relationship?

Even before they were romantically linked, there was a spark.

In June 2006, McPhee and Foster were photographed together at a press conference, shortly after Foster divorced his third wife, Linda Thompson. Additionally, McPhee had already met her soon-to-be husband, Nick Cokas. But, based on this photo of the two, Reiman thinks that there was some chemistry.

"Although it is a posed photo, we can see they are close as they lean toward and into each other as well as the way he wraps his right arm snugly around her waist," Reiman tells Elite Daily.

Basically, even though they might have been "just friends" at the time, Reiman couldn't help but notice that their body language said otherwise.

Then, they started growing closer.

In November 2009, the two reunited for an event. This time, McPhee was married to Cokas, and Foster was just two years away from marrying his fourth wife, Yolanda Hadid. So, it's interesting that at the event, McPhee and Foster clearly had some sort of spark between them. According to Reiman, in the above photo, "Their heads and faces are touching, demonstrating deep affection."

Additionally, "he holds her with his arm wrapped around just above her waist snugly. In addition, their feet point toward one another and her left foot turns inward as well." For Reiman, this body language is "a signal of vulnerability, a feeling of protection and affection." So, perhaps at this point, the two were starting to realize their feelings for each other.

But when they were reportedly dating, they seemed aloof.

In 2017, Foster and McPhee became romantically linked, according to E! News, as they were reportedly seen having some pretty intense PDA-filled moments at a dinner together in May. Attending an event in November 2017, they stopped to pose for this photo, which Reiman wasn't really impressed with. "This is an average picture," she said.

"Both are standing comfortably close to one another but there is not the usual affection we have seen in the two previous pictures," Reiman continued. "There is no head touching, we cannot see his arm wrapped around her body and their smiles are merely for the camera." Although McPhee and Foster were reportedly dating at that time, maybe they didn't want to show any PDA in order to keep things as private as possible.

They've relaxed a lot over time.

Attending the 26th annual Elton John AIDS Foundation Academy Awards Viewing Party in March 2018, Foster and McPhee seem a lot more relaxed. "We see a pattern of him keeping his hand in his pocket — this could be part of his photo baseline," Reiman says.

"They seem to be close here again, heads leaning toward each other, however, their faces are not head to head," she says. "In addition, although his arm is around her, note there is a looser grip than in previous photos — although this could be due to the fact that he is holding something else in his hand — perhaps a phone." So maybe since they're a more established couple, McPhee and Foster don't feel the need to prove anything with their body language. But, according to Reiman, they still seem pretty in love.

Most of all, it seems like they want to keep things low-key.

In one of their most recent photos together at the 2018 MET Gala, McPhee and Foster seem a little more posed. "She appears to be facing forward instead of orienting her body toward him — this is atypical from the other photos," Reiman said. Considering this was taken at fashion's biggest night, though, this could be so McPhee can show off her dress.

"In addition, they are not leaning into one another and her left arm on her hip is a different pose. His arm is draped around her waist, however, once again it appears to be loose and not tightly gripping like earlier poses." So maybe the two just want to live their own lives, without the pressure of the public. Truly, McPhee has already commented on the matter, and it seems as though they just want to keep it low-key, which is totally their right.

Based on a Reiman's analysis of these photos, it almost seems as though these two had the hots for each other long before they started dating. If that's true, then their engagement has been a long time coming. Yay for lasting love!!