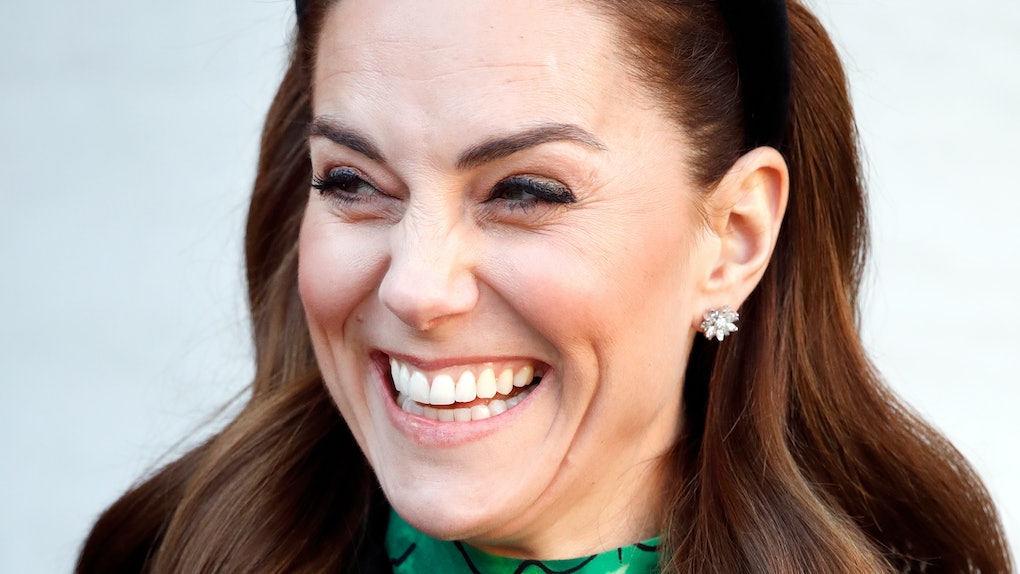 You ready for my favorite piece of gossip possibly ever? An apparently thirsty Kate Middleton reportedly called Prince William "so, so sexy" once upon a time at a royal event back when they were dating. This absolutely amazing tidbit comes from William's Royal Air Force graduation at Sandhurst in December 2006, almost five years before they tied the knot. It's resurfacing now because, per The Mirror, True Royalty's documentary Royal Wives apparently had a lip reader decipher what Kate was whispering during the event. And, without further ado, here's exactly what the lip reader reportedly claims the now Duchess of Cambridge was saying: "I love him in uniform, he's so, so sexy."

Like, um, can someone crack open a window? It suddenly just got so hot in here. As far as who Kate was still whispering to, the details are still TBD. According to The Mirror she was there with her mom and dad, Carole and Michael Middleton, who I would assume wouldn't necessarily be the ideal people to thirst over your boyfriend with. But who knows?! Maybe the Middletons are a super sex-positive bunch.

Personally, I like to imagine Kate saw William strutting out in his gray and red uniform and just couldn't help but whisper it to herself because she was just so thirsty for him at that very moment.

Here's a glimpse of William looking "so, so sexy," to borrow a phrase Kate reportedly uses:

Apparently, it was a big deal that Kate's mom and dad snagged an invite to the event. "We hadn't expected Kate and her family to turn up, and myself and a number of photographers and journalists were all standing on a press stand together," journalist Rebecca English said during the Channel 5 documentary William & Kate: Too Good To Be True, per The Mirror. "Suddenly out of the corner of her eye we saw Kate and her mother and father being ushered down to the front of the seating. I remember turning to the person next to me and saying that's it, it's a done deal. This woman is going to be our future Queen."

"Suddenly the engagement whispers were starting," royal expert Victoria Arbiter reportedly added, per The Mirror. "There was intense pressure on William and Kate, and short of printing the tea towels, everyone had these two walking down the aisle imminently."

Thankfully, the two didn't seem to let the pressure crack them. Actually, they even wound up briefly splitting shortly after William's RAF graduation. "We did split up for a bit," William said of their short-lived breakup during their engagement interview. "But that was just, we were both very young, it was at university, we were both finding ourselves and such, and being different characters and such." Kate added that, while she "wasn't very happy" about the situation at the time, she did feel that it ultimately made her stronger.

And now look! Kate has been happily married to her "sexy" husband for almost a decade.