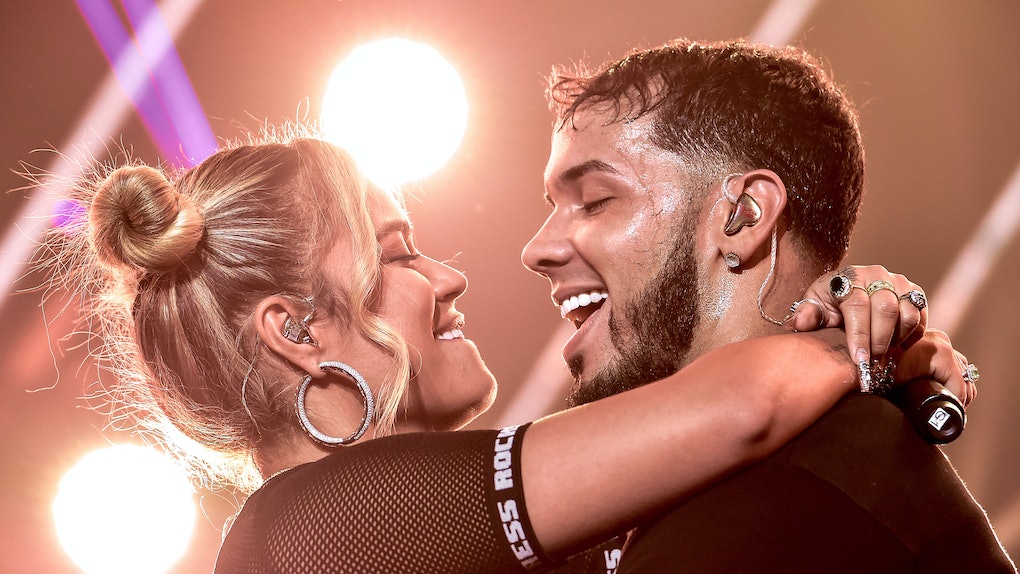 Seriously hot couples are popping up all over the Latinx-o-sphere. From Maluma and Natalia Barulich, to Anuel AA and Karol G, there's no shortage of young, hot Latinx celebrity love, and it's pretty safe to say fans are living for it. I know I am! My current obsession? Anuel AA and Karol G. This duo may be relatively new, but their chemistry is off the charts. This is especially evident in Karol G and Anuel AA's body language on Instagram. Guys, it's adorable.

Before diving into their body language, here's a brief look at Anuel and Karol's relationship history. In a combined interview with Billboard Latin back in September 2018, the two said they'd been in contact while Anuel was in prison (he was sentenced to 30 months in federal prison for unlawful possession of a firearm, according to Primera Hora), while Karol was looking for someone to remix her song, "Ahora Me Llama." They went back and forth for a while, trying to collaborate on projects, but it didn't actually happen until Anuel was out of prison and wrote their first collaboration, "Culpables," especially for Karol. Following the release of "Culpables" (and the very steamy video that came with it), rumors began to fly that the two were more than friends, even though they insisted they weren't. (And even after they shared a super hot kiss onstage while performing together in New York.)

It wasn't until Anuel's birthday in November 2018 that they put the rumors to rest, with simultaneous Instagram posts dedicated to each other alongside really heartfelt messages where they talk about what they love about each other. The following month, they got each other's names tattooed on their hands, PulsoPOP reports, and Anuel got a huge photo of the two of them tattooed on his back. They recently released the music video for their newest song together, "Secreto," all about their relationship when it was a secret and fully consisting of home-made video clips the couple took of each other during that time. It's real cute, y'all.

Now that their love is finally public, here's a look at their body language in the photos the two of them have posted to Instagram. Gear up, because it's a lovey-dovey ride.

1. They're definitely very intimate together.

If this Instagram post proves anything, it's that Anuel is completely smitten by Karol. "He's really into her," body language expert Traci Brown tells Elite Daily. "The licking thing is odd but shows that they have a really intimate relationship." (Click the Instagram post to play the full video!)

"Anuel AA is playful and yet sexual in the video," body language expert Blanca Cobb also tells Elite Daily. He's making it a purpose to give her lots of kisses and be silly with her as well, and it seems like she's all for it. "With her neck tilted to the side, Karol G is letting Anuel AA know that she’s liking his attentions."

2. She trusts him, but she's also keeping her guard up.

While this picture may seem just cute, it also says a lot about Anuel and Karol and their relationship dynamic. The way he's completely wrapped around her shows that he might be exhibiting a lot of control, Brown says. Karol's body language shows that she trusts him and knows he has her back, Cobb explains. "With his hand covering up her mid-section, he’s got her and not letting her go. By her smile, Karol G is OK with that," she says.

Though her overall body language shows that Karol is completely in awe of her man, her hands show that she also might be keeping her guard up. "Notice she is giving a set of odd protective cues with her left hand and arm and is using her left hand to pull down slightly on his neck hold of her," body language expert Patti Wood tells Elite Daily. "She is keeping up boundaries."

By holding her fully, Brown says Anuel is once again demonstrating controlling tendencies, but their interlocking fingers say "they're really close." The fact that Karol is leaning completely into Anuel re-emphasizes that she trusts him. "She’s snuggled back up against him with his legs draped on the outside of her body," Cobb says. "With their hands interlaced, we know that there’s a bit of romance between the two."

Anuel's grip around Karol gives off somewhat of a possessive vibe, Wood says, but his legs tell a totally different story. "It's interesting that he's using that possessive neck hold but his legs are relaxed and open with the legs far apart, toes pointed out in a way that doesn’t show possession at all," she explains.

4. They want to show off their relationship.

While the tongue thing may seem a little strange, it "does show that they're really into each other, and they like to be shocking," Brown says. They're also making it a purpose to show the world they're all-in and totally happy about it. Anuel's looking at the camera and not at Karol, which could explain that this particular photo was more to show their relationship off than to show how into each other they are. "However, you gotta be something for your partner if you’re gonna get a bit sexual for a photo," Cobb points out.

So, if their body language on Instagram is any indication, this new-new couple is totally taken by one another. Thankfully, their secreto is no more, so here's hoping Anuel and Karol make it last (and continue to bless us with bop after bop).