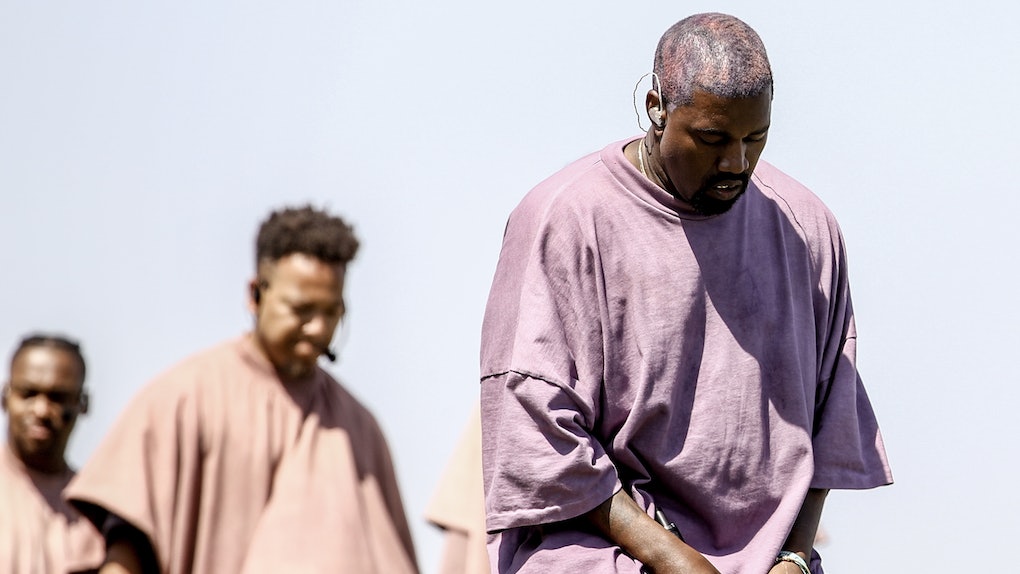 There's no question about it — it's officially Yeezy season. In anticipation for Kanye West's slated Jesus Is King album release on Sept. 29, fans are buzzing about the track list and how it'll stack up with West's creative masterpieces from the past. But now, there's even more reason to celebrate the rap king. A new IMAX documentary called Jesus Is King: A Kanye West Film will hit theaters on Oct. 25. Kanye West's Jesus Is King movie will accompany his new album to make for an all-encompassing musical and visual experience.

Jesus Is King: A Kanye West Film was announced to the public on Sept. 29, the same day as his expected album release. Though the album has not been released yet, there's plenty to get excited about regarding the new film. Get ready for a full-throttle experience, because Jesus Is King: A Kanye West Film will be released worldwide next month on Oct. 25 and will screen exclusively in IMAX theaters.

"Filmed in the summer of 2019, Jesus Is King brings Kanye West's famed Sunday Service to life in the Roden Crater, visionary artist James Turrell's never-before-seen installation in Arizona's Painted Desert," IMAX revealed in a release about the new movie. "This one-of-a-kind experience features songs arranged by West in the gospel tradition along with music from his new album Jesus Is King — all presented in the immersive sound and stunning clarity of IMAX."

Since viewers of the film will get an intimate look at West's Sunday Service events, which are normally relatively small, invite-only affairs that require non-disclosure agreements from attendants, the documentary is one you won't want to miss out on. You'll be singing right along to the catchy tunes from the Sunday Services which include some of West's biggest hits like "Ultralight Beam / Ultralight Prayer," "Power," and "Jesus Walks." West also does his own take on classics like Stevie Wonder's "As" and Shirley Caesar's "Satan, We're Gonna Tear Your Kingdom Down."

The announcement of the Jesus Is King documentary prompted questions from fans about when the album would finally be dropped. Since the album was originally slated for a Sept. 27 release, fans took to social media to express their frustration and point out the delay.

Many fans noted that West has missed his announced album release dates before, most notably last year when he was reportedly going to drop an album called Yandhi in the fall. Now a year later, Yandhi has still not been released and West has made no indication that it ever will be.

But unlike Yandhi, Kanye West's new album Jesus Is King has actually premiered to some select audiences at listening parties across the country, so fans know that the music is there and ready to be released. The announcement of Jesus Is King: A Kanye West Film just goes to show that West always has a trick up his sleeve. Though it can't come soon enough, West's new film and album will surely be worth the wait.

More like this
What Do BTS' "Film Out" Lyrics Mean In English? They're About A Past Relationship
By Michele Mendez
Kanye West's New Netflix Docuseries Sounds Epic, But Will It Feature Kim Kardashian?
By Brandy Robidoux
Here's How To Stream BTS' 2021 'Bang Bang Con' So You Don't Miss The Concert
By Cianna Garrison
Stay up to date