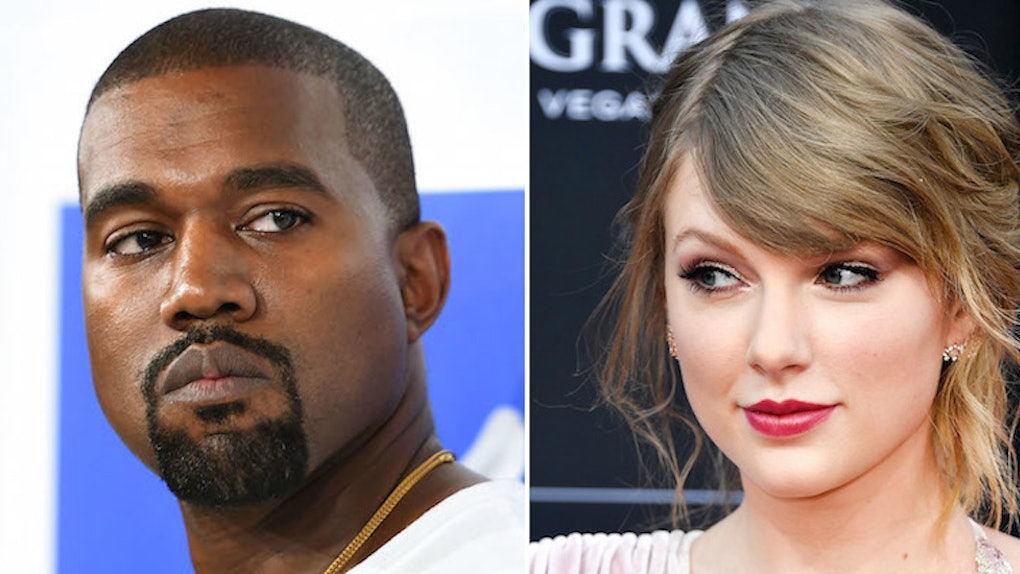 Kanye West dropped a seven-track album called Ye on Thursday, May 31, and the songs address pretty much all of the public drama and criticism he's caused and received lately. He addresses that whole "slavery was a choice" mess, he addresses his weeks-long Twitter rant and the comments about the state of his mental health, and he very subtly addresses his beef with Taylor Swift, according to fans. Yes, Kanye West threw shade at Taylor Swift, and it was in the most blink-and-you'll-miss-it way possible.

Kanye fans sniffed out the subtle shade at the end of the song "Violent Crimes." The song is the last on the album and rounds out a long string of lyrics throughout the album addressing the many controversies in West's life. It comes off as one last little jab at Swift before the beef is all laid to rest (hopefully).

The chorus comes in first in "Violent Crimes." It's seemingly aimed at North and Chicago West. The lyrics go,

Don't you grow up in a hurry, your mom'll be worried / It was all part of the story, even the scary nights.

N****s is pimps, n*****s is players / 'Til n****s have daughters, now they precautious / Father forgive me, I'm scared of the karma / 'Cause now I see women as somethin' to nurture / Not somethin' to conquer / I hope she like Nicki, I'll make her a monster / Not havin' menages / I'm just being silly.

The whole song is about his daughters, and men having daughters in general. It's an emotional song that you wouldn't expect any shade to fit into, but like I said, the shade (if it is, in fact, shade) is so subtle, it barely even counts as shade.

The rumored shade comes in the line about Nicki Minaj. You assume the verse, which is rapped by West in the beginning, was written by West, but the end of the song plays a voice message to West from Minaj, where she raps a version of the lyrics about her that ended up on the track,

I'm sayin' it like, "I want a daughter like Nicki, aww, man, I promise / I'ma turn her to a monster, but no menagés." I don't know how you saying it, but let 'em hear this.

The outro seems to suggest that Minaj approved the lyrics about her before being featured on the track and may have even helped develop them. And that, my friends, is where the shade lies.

Remember all the drama about the song "Famous" when Kim Kardashian posted Kanye West and Taylor Swift's phone conversation, revealing that the rapper reached out to Swift for approval before releasing the song despite Swift letting the world believe she was blindsided by the controversial track? (Of course you do.)

Well, fans think West including this voice message from Minaj in the song is him throwing some shade at Swift.

Fans on Twitter made note of the decision. One fan said, "Kanye adding in Nickis approval of the verse about her at the end of violent crimes so he don’t gotta deal with another Taylor situation...I see the subtle shade my dude." Other's just made note of the reference.

West provided proof in the song that he had permission to include the lines about Minaj from Minaj herself. The drama with Swift over "Famous" started when Swift claimed she was offended by what West said about her in the song ("For all my south side n****s that know me best, I feel like me and Taylor might still have sex. Why? I made that b*tch famous"). Then, Kim Kardashian posted a video of a phone call between West and Swift where you see West reading the line to Swift over the phone, and Swift seems to give her seal of approval. Swift responded by saying she never approved of the lyrics calling her "that b*tch." In my opinion, it was a weak response to getting caught redhanded.

This move on "Violent Crimes" to include Minaj's explicit permission to use the verse in the song could definitely be taken as shade toward Swift. Instead of letting people speculate whether or not the line about Minaj was approved by Minaj (it would probably happen given the "Famous" drama), he cut out the middleman by making the receipts the finale of his album. 'Twas a (slightly) shady move.