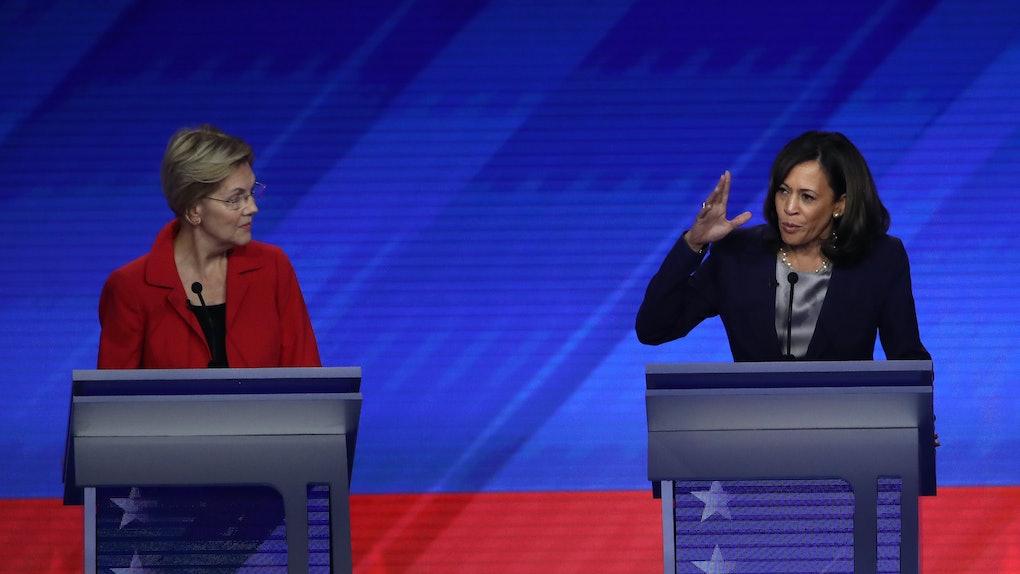 For the third time in as many months, the 2020 Democratic presidential candidates faced off on key issues like climate change, health care and immigration. On Sept. 12, the ten candidates leading the polls came together on a single stage for the first time this summer to participate in a three-hour debate in Houston, Texas. The highly-anticipated matchup included several passionate statements and heated remarks, but one of the biggest moments from the night was when California Sen. Kamala Harris compared Donald Trump to the "small dude" from The Wizard of Oz, aka the Wizard himself.

There were many memorable moments from Thursday night's debate, but the moment that stands out the most was when Harris made a Wizard of Oz reference during a discussion of trade policy. When the candidates were asked to comment on Trump's leverage of tariffs against China, Harris told the crowd that she is not a "protectionist Democrat." She said she understood that the United States needed to hold China accountable — but not necessarily in the way that Trump has in mind.

“He conducts trade policy by tweet, frankly born out of his fragile ego,” Harris said of Trump, and she described the president as "erratic on trade policy."

Elite Daily has reached out to the White House for a response to Harris' comments about Trump, but did not immediately hear back. According to The Washington Post, Massachusetts Sen. Elizabeth Warren could be seen chuckling following Harris' comment — and she wasn't the only one. The audience in Houston laughed at what Harris said, as did many Twitter users who were amused by the "small dude" comment:

Harris' comment got a lot of attention on social media, but it wasn't the only notable thing about Thursday night's debate. The two previous Democratic debates of the 2020 election season were both two-day events, with a 20-candidate field playing the stage. But ahead of the Sept. 12 debate, the DNC implemented stricter rules for which candidates could qualify, Vox reported. As a result, Thursday night marked the first time that all of the major candidates and frontrunners were on the same stage — and it was quite the event.

There was a great deal at stake leading up to the debate. It was the first time since the start of the election cycle, for example, that Warren and former Vice President Joe Biden shared a debate stage. Biden was an early frontrunner in this campaign, in large part due to his name recognition and affiliation with former President Barack Obama. But Warren has rapidly advanced on Biden in the polls, and she has made waves in a crowded Democratic field with her progressive policy proposals on everything from health care to student debt.

That's not all that voters had to look forward to ahead of Thursday night. Biden also shared the stage with Harris for the third time; the first time was on June 27, when Harris confronted Biden over his record on race and busing. It was also the second time that Vermont Sen. Bernie Sanders shared a debate stage with Warren. On July 30, the two progressive senators joined forces to defend policy proposals like Medicare for All from their more centrist colleagues, and many voters looked forward to seeing another progressive tag team effort on Sept. 12. In fact, Biden was standing right between Warren and Sanders — two candidates who have criticized the presence of big money in politics, even as Biden attends high-profile fundraisers around the country.

Thanks to the DNC's higher standards for participation, at least 10 other Democratic candidates — including Hawaii Rep. Tulsi Gabbard, author Marianne Williamson, and New York City Mayor Bill de Blasio — all failed to qualify for the third Democratic debate. This time around, the DNC required candidates to hit at least 2% in four pre-approved polls, and receive 130,000 unique donations, Vox reported. However, there may be more candidates participating in the fourth Democratic debate in October, because the DNC is keeping the same rules in place. That means that the 10 candidates that took the stage in Houston on Thursday will automatically be able to participate in the next debate — as well as any additional candidates who manage to meet the requirements by the Oct. 1 cutoff, such as billionaire Tom Steyer.

One thing is clear: the third debate was filled with memorable exchanges, and we can safely assume the fourth debate will be no different. Bring on 2020!