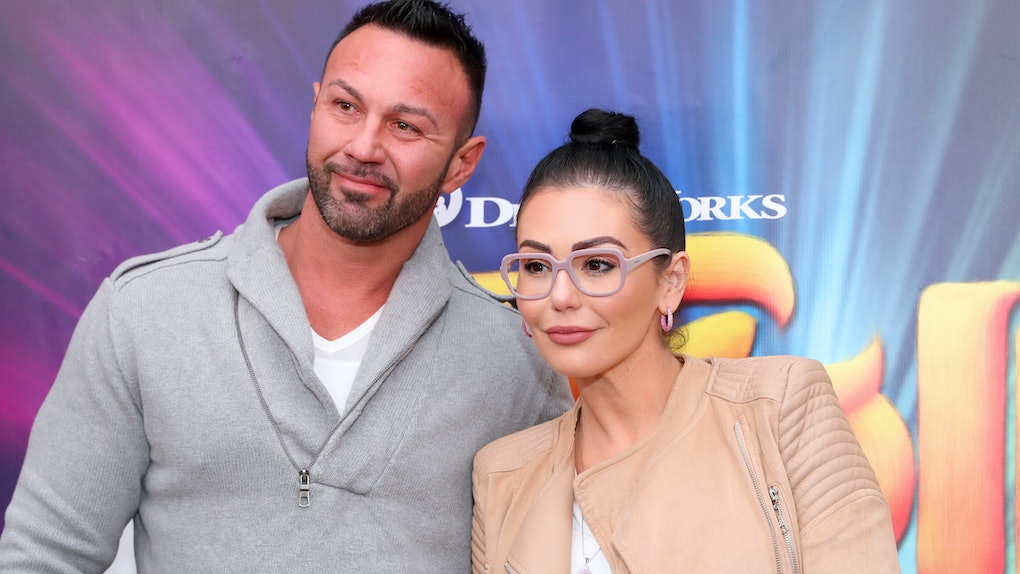 JWoww & Roger Mathews Celebrated Easter Together As A Family, & Good For Them

Every holiday, celebs take to social media to share their celebrations with the world, and this Easter was no exception. But if you've been following these Jersey Shore alums and their divorce drama, you might be pretty surprised to learn that JWoww and Roger Mathews celebrated Easter together. Seriously! Jenni “JWoww” Farley and ex Mathews showed off their seriously impressive co-parenting skills by setting aside their issues over the weekend to celebrate the holiday together with their children, Greyson and Meilani.

Over the weekend, Rogers shared a series of photos and videos on Instagram captioned “Beautiful family Easter Day,” which documented the celebration as the kids participated in an egg hunt, watched TV, and even posed for some family photos. It seemed like a vast improvement in relations between Farley and Mathews. As anyone who has paid attention to their breakup drama can attest to, the former couple has come a long way in the past few months. It was also a surprising and sweet twist on a story that went from sad to truly upsetting over the course of a few months at the end of last year. Now it seems like these two may have been able to find their own balance as co-parents.

To say that it's been a rocky road for Farley and Mathews since the Jersey Shore star filed for a divorce, citing irreconcilable differences back in September 2018, would be a major understatement. Immediately following the announcement of their split, Mathews declared that he intended to win his wife back in an Instagram video. “My wife filed for divorce, it’s true. I’m just gonna keep it simple. I don’t blame her. There’s no cheating or any dumb s–t, any juicy details,” he said at the time. “She just grew tired of the repetitive pattern that we fell into … again, I’m not gonna get into detail but it was a repetitive pattern and not a good one. I’m not done fighting, I’m gonna win my wife back. I’m gonna win her affection back, I’m gonna win her love back. I have no intention of being a single dad. We’re in counseling so there is hope. It ain’t over till the fat lady sings,” Mathews added.

At the time, it seemed like the couple may have been heading toward a reconciliation. In October, they celebrated their third wedding anniversary together and, in November, Mathews told Us Weekly that they were working on the relationship. “We spent eight years together so… I feel like there’s nothing that’s not fixable in our situation,” Mathews said.

However, things took a shocking and upsetting turn in December 2018, when Mathews again took to Instagram to share that police were dispatched to their home to escort him out of the house, when, following a reported argument, Farley reportedly filed a restraining order against him. In January, Farley released a statement on her website that accused Mathews of both negligence toward their children and of alleged physical assault over the course of their relationship. She also included video clips that backed up this alleged behavior.

So yeah, this split has been tumultuous, to say the least. That makes it even more impressive that the exes were able to set aside their issues for the holiday. But their co-parenting success shouldn’t be taken a sign that they have any intentions of rekindling their romantic relationship, as Page Six reports. “Jenni’s kids’ needs and wants will always come first,” Farley’s rep, Robyn Matarazzo, told Page Six. “She is being an adult about the divorce and working towards being better co-parents. As far as the divorce, there is no reconciliation in the future and she is excited about continuing to move on with her life,” Matarazzo said.

Honestly, this is probably the best outcome we can hope for. Both Farley and Mathews can move on with their lives, while still prioritizing and co-parenting their kids. Truly, that’s commendable.

If you or anyone you know is suffering from domestic violence, contact the National Domestic Violence Hotline at 1-800-799-7233 or visit www.thehotline.org.