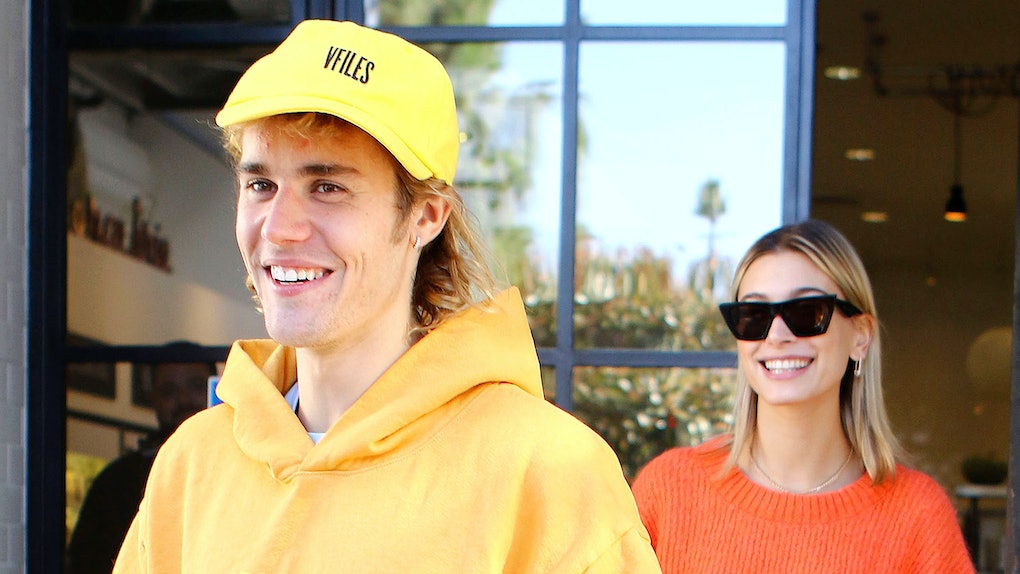 PSA: The wedding of the year took place on Sept. 30, and wow, I can't handle the cuteness! Justin Bieber and Hailey Baldwin's wedding body language was really adorable, if a little non-traditional. Their star-studded nuptials, which went down at the Montage Palmetto Bluffs in South Carolina, were full of elaborate details and sweet moments. It's safe to say this wedding lived up to the hype — and honestly, the bar was set pretty high. But would you expect anything less than the best from these two?

Bieber and Baldwin have technically been married for over a year, ever since they tied the knot at an NYC courthouse on Sept. 13, 2018. But they've always maintained that they wanted a traditional wedding, so fans have waited patiently for the big event to happen. It's been a journey, and they've reportedly unsuccessfully tried to plan it a few times before. Thankfully, they finally got their friends and family together (which can't have been easy, considering all the A-listers who made an appearance). And what a celebration it was!

The first thing Traci Brown, body language expert and author of Persuasion Point: Body Language and Speech for Influence noted, was how unconventional the body language is in these photos. “Wow, these are interesting pics. Not what I'd expect on a wedding day!" Brown told Elite Daily. For one thing, the photos don’t seem to have a typical, romantic vibe to them. They are more relaxed and, as Brown notes, not as connected as she expected for two people who just got married. “Her hands seem to be cute fixing his tie, but in the end she's putting a big barrier between them. And she's not really kissing him. She's not putting any energy into it at all,” explains Brown.

On the other hand, Los Angeles-based wedding photographer Jenna White tells Elite Daily she sees these images a little differently. “These appear to be photo booth pictures, which tend to be more relaxed because they're taken during the reception when all of the wedding formalities are complete," she says. That may explain why the couple seems a bit more chill than you might expect from more traditional wedding photos. “I love how playful and comfortable these two are with each other,” adds White.

2. They Aren’t Taking Things Too Seriously.

In this second image, Brown expresses some concern about the body language she sees between the couple. “He has a look of fear on his face with eyebrows raised and the corners of his lips pulled back a bit. And she's just trying to be shocking with her tongue stuck out like that,” says Brown.

But it’s exactly that nontraditional vibe that, according to White, makes the image so compelling. “I love these photos, and although they may not be typical wedding portraits, I think it says so much about their relationship. I love how playful and comfortable these two are with each other,” she says. “It really gives a fun glimpse into how they interact and love each other.”

So, what does all this mean for Bieber and Baldwin? This couple is having fun and leaning into the vibe of their wedding day. That relaxed vibe usually only shines through when couples are super comfortable with each other. And when it comes to these two, would you really expect anything different?

More like this
When Are Ariana Grande & Dalton Gomez Getting Married? Here's The Reported Tea
By Corinne Sullivan
Zac Clark & Tayshia Adams Are Wedding Planning & I’m So Pumped
By Lydia Wang
Justin Bieber's Quote About His First Year Of Marriage To Hailey Baldwin Is Unexpected
By Corinne Sullivan
Stay up to date