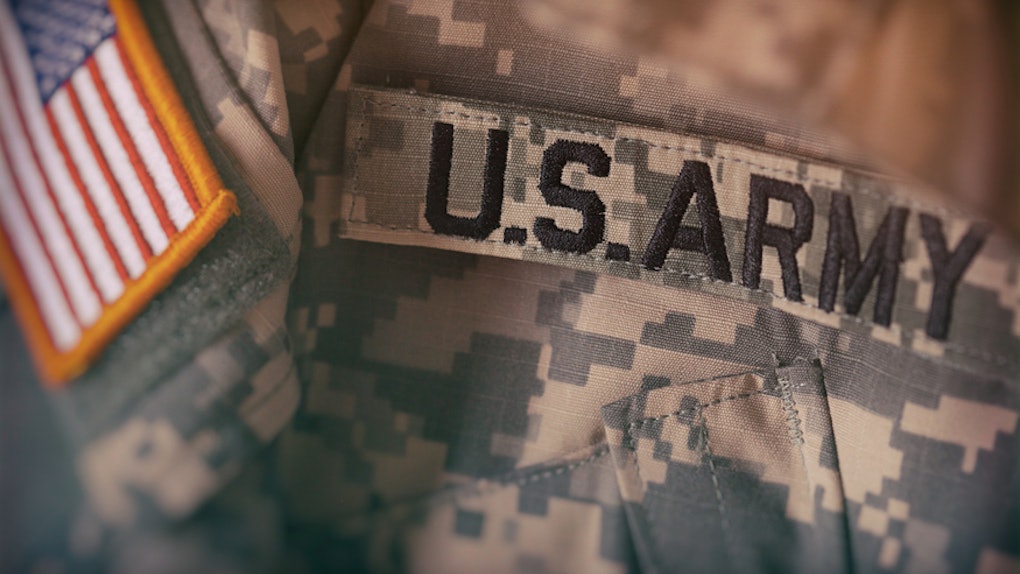 Before we hop right into the biggest optical illusion of 2017, let me give you a little bit of a backstory here. Julissa (an aspiring aesthetician) and Austin (a soldier currently serving in the U.S. army) are a newly engaged couple from South Texas. Like most couples do when they get engaged, the couple decided to do a photo shoot to celebrate their engagement and get the word out there. But Julissa and Austin's photo shoot took a surprising turn when she got the copies of the photos from the photographer.

You see, because Austin is in the army, they decided to incorporate that army theme into their photo shoot. This, of course, involved Austin wearing his green camouflage uniform in the photos. They also decided to pick a spot with lots of green and tan hues and trees for the location of their photoshoot. I have a feeling you guys all know where this is going...

Now, don't get me wrong. I am a SUCKER for a good camouflage joke. My boyfriend got me a camouflage bucket hat for my birthday this past year, and I had the actual time of my life hiding in bushes and behind tarps trying to "blend" in. Don't believe me? Here's proof:

Anyway, I was intentionally trying to blend in. But Austin? Not so much. But when you see the pictures, there's no denying it: The guy is totally blended into his environment. And now, people are literally so shook over this.

Julissa told BuzzFeed News that it was her mom who first noticed the issue. Julissa, who was so excited about the pictures, came home to her mom to share the pictures with her... and that's when her mom asked why Austin wasn't in any of their engagement photos. "I thought she was making a camo joke, but she was serious," Julissa told BuzzFeed News.

It wasn't just Julissa's mom who was confused about the pictures. As soon as Julissa posted the engagement photos on Twitter with caption, "so yeah I'm his queen," people flooded her inbox with reply tweets wondering where the guy she was referring to was.

This guy thought she was flying.

This guy thought she was floating.

This guy called her out HARD for being by herself.

This guy wants to know who is making her float like that.

This woman thought she was leaning against a tree at first glance.

This woman swears she's not even trying to make a camo joke... she really didn't see him.

This lady, who, I just have to add, goes by "Spooky B*tch," is confused.

This guy, like many others, just wants to know if she's floating!

This woman mistook her fiancé for a tree branch.

This guy is calling her out for that caption.

This guy (who clearly needs a history lesson) insists she needs a king to be queen.

He genuinely thought she was by herself in that first picture.

Josh had to give his props to the camo in the first picture.

This self-proclaimed "Booty Connoiseur" chalks it up to camo just bein' camo.

I have lots of questions, and I have to be honest, most of them have to do with @BootyConnoiseur. Does he mean, like, treasure? Like a pirate's booty? Or does he legit mean he's a connoisseur of butts? I HAVE SO MANY QUESTIONS.

But anyway, the main lesson here? If you're going to be dressed in camo for your engagement pictures, make sure you try to avoid taking those pics where camo does what camo does best.