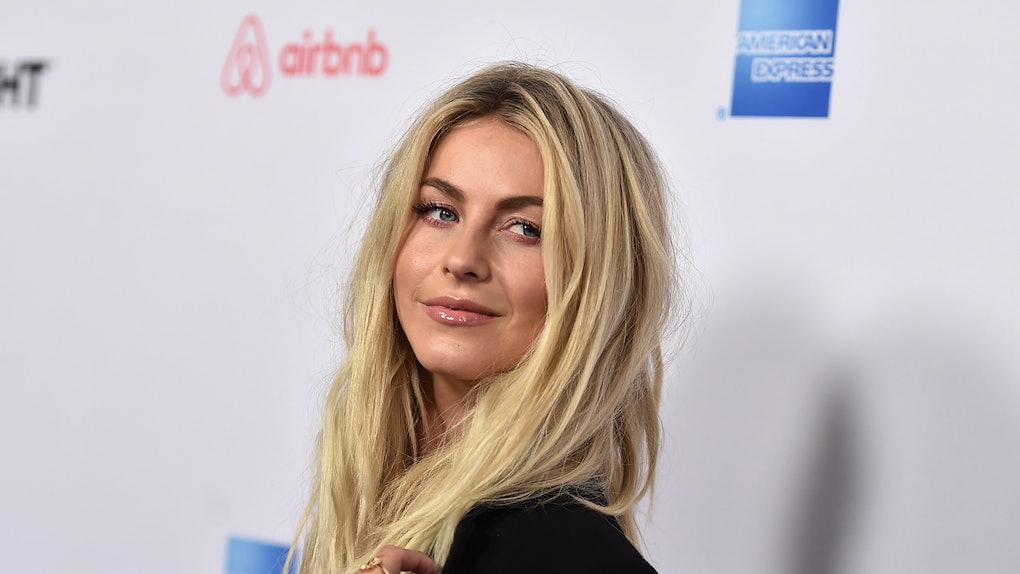 Similar to how essential oils have emerged from the back of grandma’s cupboard to sitting pretty storefront, it’s come to my attention that crystals have transformed from witchcraft accessories to wellness essentials over the years, too. Even if you’re not a believer (yet), it’s hard not to want in on this gorgeous decor trend popping up all over social media. I’ll admit, I was a skeptic at first myself, but after chatting about Julianne Hough’s favorite crystals with the Dancing With The Stars judge herself, I’m convinced that I, too, need a few of these pastel-tinted stones to cleanse my aura, and maybe even add some character to my bathroom shelves, while I'm at it.

Now, hear me out: You can’t tell me I was the only one giving The Hill’s bad boy Spencer Pratt major side-eye for dropping up to $1 million on crystals that, for all he knows, could have been painted over, to reap the alleged superpowers he went on and on about. It just sounded like a bunch of hocus-pocus to me.

But then there’s Julianne Hough. In an exclusive interview with Elite Daily, I asked the newlywed what her ideal rest day looks like, and in her answer, she paints the loveliest picture I could imagine: a glass of wine, a Game Of Thrones marathon, some quality cuddle time with her dogs, and a bubble bath with crystals on the side. These all sound like awesome ways to relax, especially in between acting gigs, dress rehearsals, and working out with her beau, Brooks Laich, but the casual mention of crystals at bath time was what really peaked my interest the most.

Hough tells Elite Daily she uses crystals to enhance her self-care rituals, but she also says they help keep her emotions in check.

Crystals are a newfound interest for the 29-year-old, and even though she doesn’t exactly consider herself an expert on the subject just yet, it’s obvious Hough’s done her homework.

“I’m definitely getting more into minerals and elements of the earth and kind of learning about the energies they hold,” she tells Elite Daily with a hint of pride.

If you’ve stumbled upon one of the many images on Instagram or Pinterest of a woman’s legs floating in a bubble bath surrounded by candles, rose petals, and the occasional gemstone carefully positioned along the side of the tub, that’s what I’m imagining as Hough reveals that she bathes with crystals around her bathroom — “a great way to unwind,” she says.

But crystals aren’t just earthy accents to string along your tub or place on your desk. For Hough, crystals symbolize security, especially the black tourmaline crystal bracelet she wears to ensure her emotions won't fully give in to what she tells me is her "empathic" nature.

Black tourmaline, according to the website Crystal Vaults, is a rare gemstone that is considered "a premier talisman of protection," and can be worn or displayed to deflect "negative energies, entities, or destructive forces." In Hough's case, she explains, it ensures that whatever she's feeling is true to her, and not someone she's come in contact with.

“I’m an empathic person,” Hough tells Elite Daily. “I talk to a lot of people with the work that I do, and being an actor, you take on other people’s emotions and, you know, feelings and stuff that aren’t yours, and sometimes, that's not good."

Hough has also been loving the self-care side of crystals, specifically rose quartz, which she tells me is especially great when she's feeling down on herself.

According to the site Energy Muse, rose quartz has been used in love rituals and ceremonies for years, and is defined as “the stone of the hopeless romantic.” And while placing this gem by your bedside might spark the fire between you and your beloved, it’s also amazing for self-care, in that it can help you recognize “your own need for compassion.”

“It’s all about love and self-love,” Hough explains to Elite Daily. "Any time I’m thinking, 'I’m thinking about myself way too much right now,’ I’ll take [rose quartz] out.”

It’s essentially a way for the starlet to stay grounded, she says, and to recognize the emotions she’s emitting to others, as well as the attitude she's directing toward herself.

Holding crystals in your palms, placing them in close proximity to you, and wearing them are all great ways to take in the energies you might be lacking, but I couldn't help mentioning to Hough there's yet another way to absorb all of that positive mojo.

"Have you heard of crystal water bottles?" I asked her.

"No! What is that?" Hough responded excitedly, wasting no time to grab her smartphone and look up the trend mid-conversation.

Crystal water bottles, I explained, are gorgeous to-go vials that come pre-designed with non-toxic crystals like rose quartz and amethyst. The idea is that water infused with crystal energies act like elixirs, allowing you to reap the benefits faster than you would if you just mindfully stare at the stone when you're bored at work.

So, if you see Hough posing with one of these babies in hand on Instagram, I'd just like to say, she heard it here first.

More like this
Mark Tuan's Quotes About His Solo Career Tease Endless Potential For The Future – EXCLUSIVE
By Michele Mendez
Billy Porter Knows He's A Walking Piece Of Art. That's The Point — EXCLUSIVE
By Margaret Blatz
'Shiva Baby' Director Emma Seligman Is Making Films For Her Generation — EXCLUSIVE
By Abby Monteil
Stay up to date