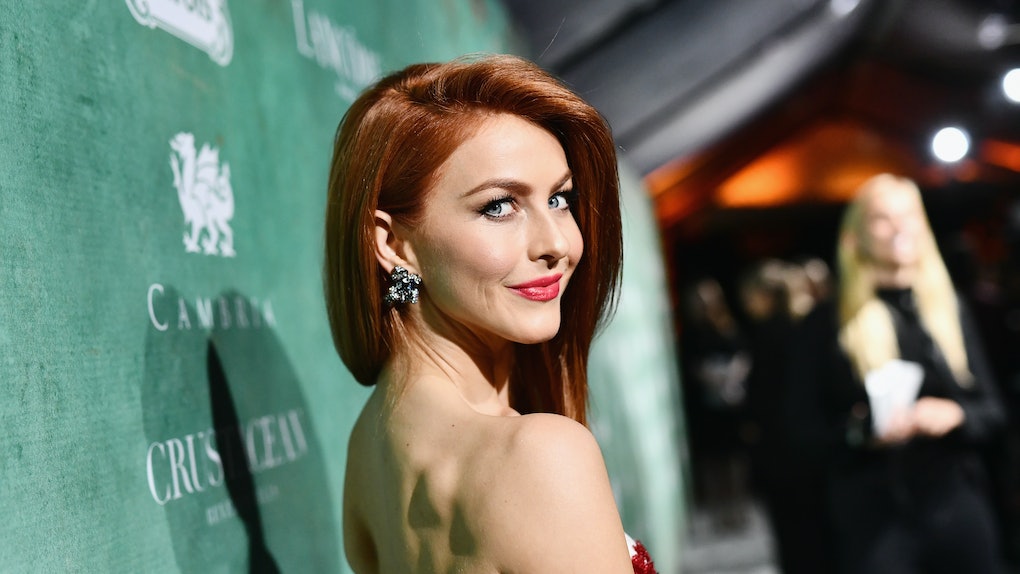 National Endometriosis Awareness Month is coming to a close, but just because March is ending, that doesn't mean the conversations surrounding the disorder should, too. I recently had the opportunity to hop on a call with my favorite Dancing With The Stars judge, Julianne Hough, to talk about her experience battling endometriosis. On top of emphasizing the importance of eating avocados and playing with puppies as often as you can, Julianne Hough wants you to speak up about your endometriosis because, let's be honest, if you don’t, who will?

The 29-year-old has been an outspoken advocate for those living with endometriosis since 2008, and even though an entire decade has passed since going public about her diagnosis, Hough’s passion for the cause is stronger than ever. Between partnering up with SpeakEndo, a campaign that offers information and resources for those living with endometriosis, and finding a way to confide in her now-husband Brooks Laich about her struggles, Hough is the perfect example of how beneficial it can be to not only accept your endometriosis, but to truly own it, as well.

Honestly, I was kind of hesitant going into this interview, partially because my family and I have been watching Hough on DWTS since she was a coach circa 2007, but the butterflies in my stomach were going especially wild because, above all, I wanted to make sure I approached the subject of Hough's diagnosis respectfully. Endometriosis — which, if you're unfamiliar with the term, is a disorder in which uterine lining grows outside the uterus, causing painful cramps, excessive bleeding, and sometimes even infertility — is an extremely personal struggle. I wanted to address the subject with Hough in a way that felt comfortable for her, and that wasn’t invasive.

It turns out, I had nothing to worry about; once I managed to get my first question out in the open, Hough didn’t hesitate to jump right into a thoughtful response.

It took a while for Hough to let Laich in on her struggles with endometriosis, she tells me, but now that it's out in the open, the two have become an even stronger couple.

Being the solo competitor that she is, Hough tells Elite Daily she used to tackle her endometriosis the same way she danced: alone. She recently told E! News that, even though she announced her diagnosis in 2008, she still wasn’t ready to jump into those deep conversations people wanted to have about it because, the truth was, she didn’t “have the answers yet" herself.

It wasn’t until Laich witnessed Hough doubling over in pain from her endometriosis that she decided it was time to have that conversation. She told E! News,

As hard as it was for me to let go of that control, it's actually amazing. Whether that's your significant other, your family, a friend, your coworkers, whatever it may be this should not be something that you should be afraid of. It doesn't define who you are.

You know you have an amazing partner when you can share all sides of yourself — the good, the bad, the internal hardships — and they still love you unconditionally. Laich really stepped up to the plate once Hough let him in on what she’s going through, from rubbing her back when she’s in pain, to making sure she gets the most out of their physical training together, and even helping her find foods that make Hough feel her best.

"Brooks is amazing, and he’s an athlete, so his discipline is incredible, and the way he is with nutrition especially helps,” Hough tells Elite Daily. “He’s really great at helping me discover things that are helping me internally and externally as well.”

One of those things, she notes, really struck my millennial heartstrings: avocado. Hough loves avocado so much, she brought it up multiple times over the course of our conversation. It’s the kind of healthy fat you need in your diet, she says, pointing out “its great for endo.”

Of course, one of the most important things every body should be nourished with is hydration, which is why Hough and Laich's organization Love United has teamed up with Propel Water to offer H2O to those who may not have access to a clean supply.

"Propel is like the gatorade of water, without all the sugar," Hough tells Elite Daily. "It has all this hydration, and electrolytes for recovery, putting supplements and things in your body that are good for you."

One of the best ways to exercise when you're struggling with endometriosis, though, is to exercise your right to speak up about your experience battling the disorder.

According to the Center for Young Women’s Health, exercise — things like walking, swimming, and yes, dancing — can improve endometriosis symptoms. At the same time, though, everyone has their limits. Because endometriosis can cause very painful symptoms, it’s important to a) know your body well enough, and be able to acknowledge when it needs a break, and b) speak up in these situations to let your trainer or workout buddy know you need to slow down.

When I ask Hough if her endometriosis symptoms have ever negatively interfered with her workouts or dance rehearsals, she admits there have definitely been times when working out was difficult. "But," she tells Elite Daily, "if I can't, I stop, and I don't beat myself up about it."

Given her profession, Hough essentially works out all day, every day, between sessions with Laich and dance practices. Judging from the way Hough talks about her disorder, and how she lives with it day to day, it was obvious to me that she's incredibly in tune with her body's needs, and there's a real power in that. However, what's arguably even more powerful than her connection with her body, is her ability to speak up when something's not right.

"[Women with endometriosis] try to [endure it] alone," Hough explains, "and nobody knows what we're going through. If I speak up, people understand, and that way, people know if I stop and ask if I can have a few minutes, they get it."

Having endometriosis does not define who you are, but it is a part of who you are, and there's no shame in that. Through her work with SpeakEndo, Hough is encouraging women to educate themselves on the disorder so that they can, in turn, educate others. There is power in knowledge, but there's also confidence. Own your endo, and don't be afraid to speak up.