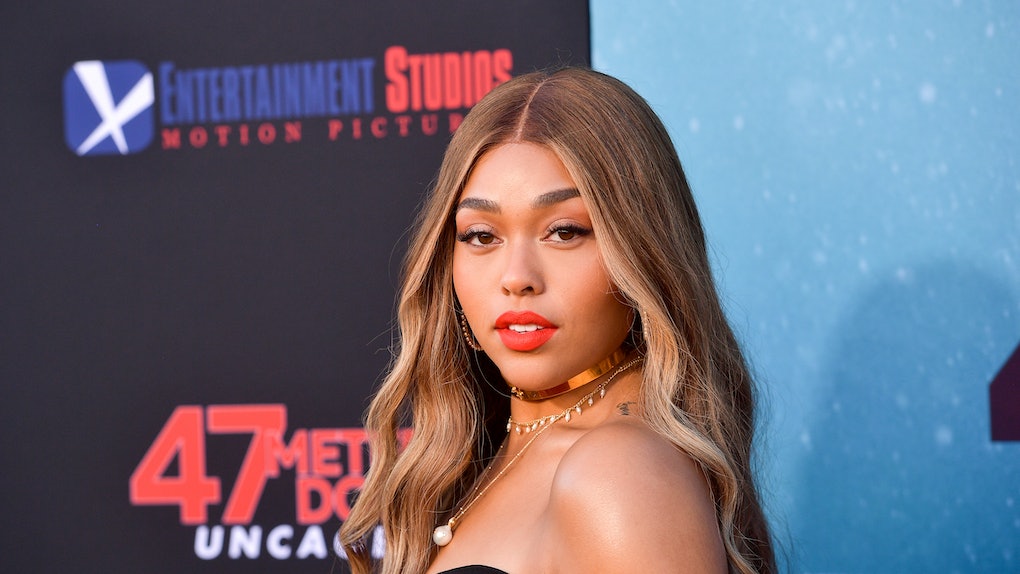 ICYMI, Jordyn Woods seemingly confirmed her new relationship via the 'Gram on Sept. 26, and the photos she used to flaunt the romance are a lot. Not only were she and her NBA boo twinning in Versace swimwear, but they also did a series of sensual poses for the three-pic carousel. In the series, Woods and Towns can be seen embracing, snuggling, and gazing dramatically off into the distance on a beach in Mexico — but according to an expert, Jordyn Woods and Karl-Anthony Towns' body language in their Instagram debut is actually super confusing.

Woods and Towns have been friends for a while, but they first sparked dating rumors when they were spotted shopping together in August of 2019. At the time, Woods shut down the speculation, but a year later, things definitely seem to be heating up. In fact, Woods' Instagram Story from her 23rd birthday party included photos of Towns' extravagant gifts for her — which included multiple Hermès Birkin bags, a crystal-covered Chanel purse, and a signed Michael Jordan jersey. By Complex's estimations, those presents combined are worth more than $64,000. Let's be real: a platonic friend just doesn't ball out like that on your bday.

Underneath the recent beachy Instagram photo set, Woods added the caption, "I found you, then I found me." Towns, who shared the same three photos on his IG account, wrote: "There are darknesses in life and there are lights, and you are one of the lights, the light of all lights." Based on these sentiments alone, it's clear that some serious feelings are developing between these two. But if you're wondering WTF these poses say about their budding romance (which, *same*) — fret not. I spoke with body language expert Traci Brown, author of Persuasion Point: Body Language and Speech for Influence, to get the scoop.

The first thing you might notice about this photo is that Woods' head is on Towns' chest — a tender pose that certainly emanates affection. However, Brown points out that despite this physical connection, there's a gaping space between the lower half of their bodies.

"People who are romantically close generally have their pelvis area close to the other's," she explains. "We don't see that here."

Not only that, but notice how they're gazing off into space? Brown notes that people in love tend to direct their energy towards each other.

"My thought is that this is a pic that was staged," she adds.

This is the strangest photo in the set, according to Brown.

For one, Towns is just standing there with his hands to his sides, making no effort to touch or physically connect with Woods. His defiant facial expression is worth noting, too.

"His chin is up, saying he's looking down on anyone else — maybe even looking for a fight," explains Brown.

Woods, meanwhile, is leaning against him with one her hand over her chest and one over her belly — which Brown says indicates that she's "expressing sensitive emotions."

In other words, there's a discrepancy here. Woods seems to be totally in her feels, and Towns appears to be slightly apathetic and removed.

Brown notes that this is the most "sultry" of all the pics, with Woods posing between Towns' legs and leaning back into him. See how his right arm seems to be curving in around her?

Woods' eyes appear closed, which suggests she's fully in the moment and enjoying his presence. On the other hand, Towns is looking at the camera, which again, makes the photo appear more staged.

So, what's the bottom line here? According to Brown, there are some mixed messages going on in their body language — and overall, she says this photoset fails to send a "congruent message." Obviously, this is still early on in this new romantic stage of their relationship, and only time will tell things pan out. If their body language says anything, it's that they care about each other, but perhaps are not totally on the same page.