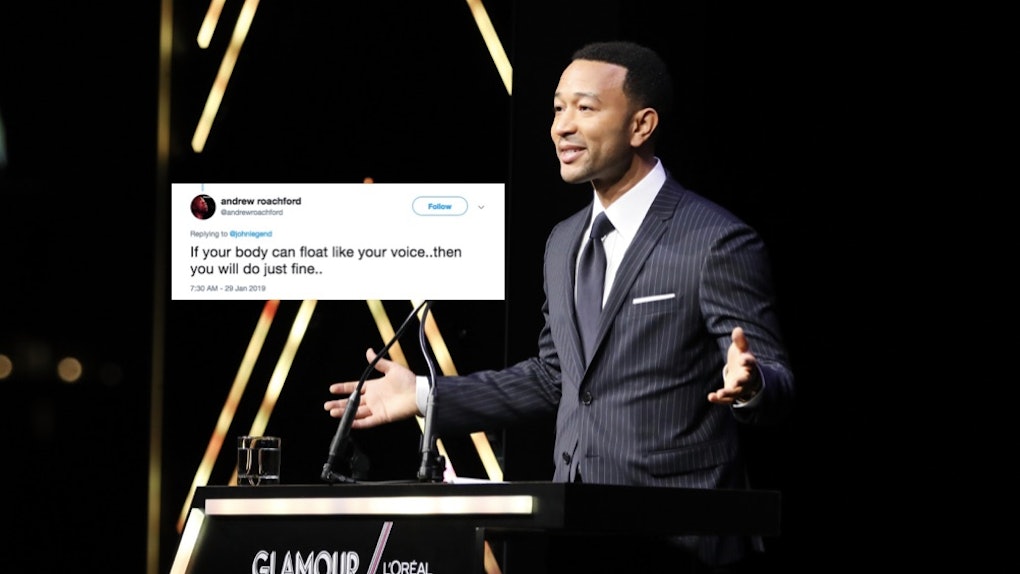 John Legend's Tweet About Learning How To Swim Is Sweet, But The Responses Are Even Sweeter

John Legend is a jack of all trades. He's one of only 15 people to ever win an Emmy, Grammy, Oscar, and a Tony (EGOT) award — not to mention the first black man to claim all four — he's an advocate for social justice, he romances his wife, Chrissy Teigen, like no other, and he flawlessly plays the role of superdad to two beautiful children. To his adoring fanbase, it might almost seem as though the “Bring Me Love” singer has no limitations — that is, until John Legend announced he’s learning how to swim on Twitter, and the truth came out: The man is, indeed, human. Judging by the many followers who flocked to Twitter to send sweet words of encouragement, however, it's clear this earth-shattering revelation has only made fans love Legend more.

As cliché as it sounds, celebrities really are just like us. They may not always show it, but they are. Case in point: John Legend making it known that, despite all the stellar things he’s accomplished over the course of his career, in all of his 40 years on this Earth, swimming is one skill the recording artist has yet to master. Though apparently, he is capable of dunking his head under water and breathing just fine, so at least he’s got that step down-pat.

Unlike his father, who, according to Legend's tweet, put off learning how to swim until his 60s, Teigen’s hubby has made a commitment to continue swimming lessons now to catch up with his kids, Luna and Miles, both of whom have already started, Legend said.

Touched by his determination and transparency, Legend received a *wave* of support from fans.

Some are even volunteering to teach the singer a stroke or two.

Oh, and as it turns out, that super romantic lyric in "All Of Me," in which Legend sings "my head's under water, but I'm breathing fine"? Yeah, that was all a bunch of mumbo-jumbo.

I mean, he did come clean, so I think we can all forgive the guy on this one. Creative license has to count for something, right?

Back to the whole John Legend is learning how to swim thing, though, I’ll level with you here, friends: I didn’t learn how to ride a bike without training wheels until I was a teenager, and to this day, I also don’t really know how to swim all that well. I’m sure that admitting to not being able to swim was a big step for Legend — it can’t be easy floating on such a high pedestal — but in doing so, the performer sent an important message to fans: You’re never too old to learn something new, and there's no shame in admitting your aren't perfect. The truth is, none of us are, but that's what keeps us growing and gaining new experiences, like learning how to swim.

Oftentimes I think fans look up to celebrities as role models, or examples, but Legend's tweet kind of levels the playing field a bit, launching an open forum of sorts in which followers felt comfortable discussing the skills they've set out to learn at different ages. In a way, it's as if fans want to repay Legend for all the times he's made them feel heard by showing him he isn't alone.

If you take away anything from this article, let it be this: John Legend can't swim, and fans are loving this perfect imperfection of his because it makes him human and real, and it lets us know it's never too late to learn something new. So what are you waiting for?