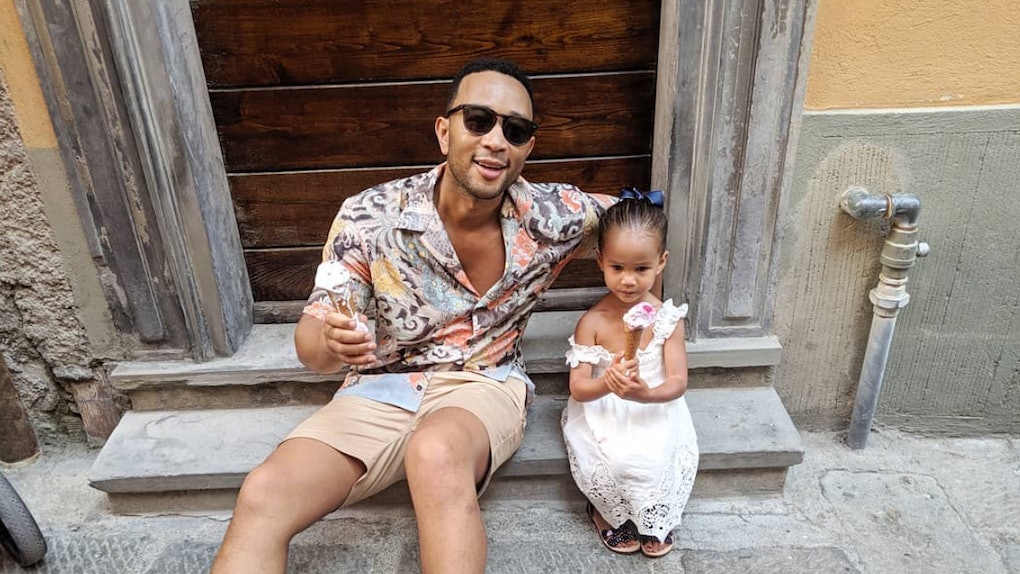 John Legend and Chrissy Teigen are on vacation with their kids Luna and Miles and that means one thing: They're posting the cutest family photos. Their family pretty much always reigns as social media royalty. From Teigen's cooking videos to Legend selfie-ing with a glass of wine, each Instagram post is worthy of all the likes. But both of their accounts really shine when the kids make an appearance, which they've been doing more and more of lately. Luna and Miles are the stars of their parents' Instagram accounts, especially during their current trip to Italy. John Legend's Instagram with Luna in Italy is one the all-time cutest pictures.

Legend and Teigen recently jetted off to Italy with their kids in tow. The Mediterranean country is a special place for the couple, since they got married in Lake Como, Italy in 2013. Six years later, their family has doubled in size and they're all hanging out in the city of Portovenere. While there, Legend took a chance to sit back and relax with his daughter over a couple scoops of gelato. He posted the photo with just a few simple emoji as the caption: 😍🍦😎. The minimalist caption is fine, because this picture is definitely worth 1,000 words.

While Legend is letting his gelato drip down the cone, Luna is giving off a much more prim and proper vibe. She's carefully holding her cone with two hands, doing a good job of keeping her adorable white dress clean. Honestly, Luna is a role model to us all. I don't know very many adults, let alone toddlers, who can eat gelato with such grace and cuteness.

Luna's been enjoying quite a few delicious treats while on this Italian vacation. On July 3, Legend posted a photo of Luna nibbling on pizza in front of a gorgeous seascape, which looks like absolute paradise. Legend captioned the photo: "Happiness = Luna eating leftover pizza on the Mediterranean." I think Luna may have inspired a new life motto for many.

Legend and Teigen's second kid, Miles, is also getting plenty of Instagram love during this Italy vacation. In fact, there's one photo of Miles that's so cute, both Legend and Teigen each posted it on their separate accounts. First Legend posted the photo of Miles with his arms up in the air, along with the cation: "My happy boy in Portofino." Then Teigen posted it, but her caption included her signature brand of snark. She wrote: "john posted this but I have more followers." When the picture is as cute as this one, you can't get mad about seeing it in your feed twice.

"She really is [funny]. She’s got a lot of Chrissy’s personality,” Legend told ET. “She even knows she’s funny already. She plays for laughs sometimes, which is hilarious.”

Luna definitely has a captive audience on Instagram who can't wait to see where her Italian adventures take her (and her whole family) next.