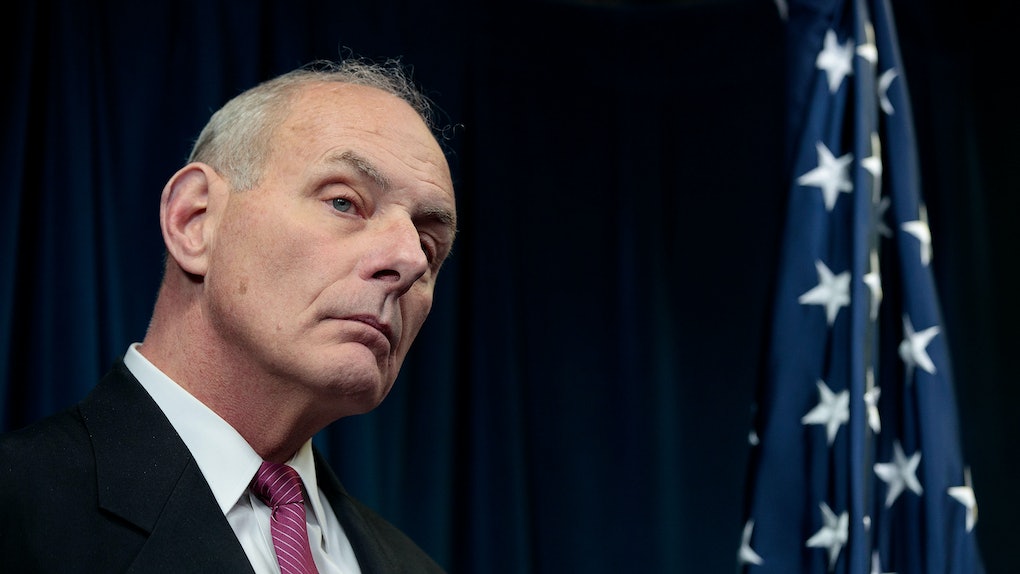 John Kelly Called Trump An "Idiot," Report Says, & He Can Join The Club

President Donald Trump is no stranger to insults, and everyone knows that when someone takes a jab at him he'll jab right back. But Trump gets particularly upset when rumors about his own cabinet members insulting him behind his back start swirling, and more often than not the president decides to respond to the rumors by ousting them from their positions at the White House. And now Trump's own chief of staff could be headed down that same road. According to a report from NBC News, White House Chief of Staff John Kelly called Trump an "idiot" — so will he be joining the Former Trump Staffer Club in the near future?

It's not yet clear how Trump will respond to this report. But if memory serves me right, this could mean that Kelly will be leaving the White House sometime soon. NBC News reported on April 30 that according to eight current and former White House officials, Kelly has allegedly referred to himself as the saving grace in the administration and consistently disparages the president's intelligence. He's reportedly specifically used the word "idiot" to describe Trump on more than one occasion, per NBC News.

"He doesn't even understand what DACA is. He's an idiot," Kelly allegedly said in a meeting according to two of the officials who spoke to NBC News. "We've got to save him from himself." Another senior White House official reportedly said, "He says stuff you can't believe. He'll say it and you think, 'That is not what you should be saying.'"

This report definitely will not sit well with Trump or any of his allies in the White House, and Kelly almost immediately countered the claims. The chief of staff responded to the report mere hours after it was published and ardently denied the claims that NBC News made, calling it "total BS." The full statement from Kelly reads as follows,

I spend more time with the President than anyone else and we have an incredibly candid and strong relationship. He always knows where I stand and he and I both know this story is total BS. I am committed to the President, his agenda, and our country. This is another pathetic attempt to smear people close to President Trump and distract from the administration's many successes.

Kelly's not the first person to reportedly undermine the president's intelligence. Actually, he joins a pretty lengthy list of high-ranking officials that have allegedly insulted Trump behind his back. For example, former National Security Adviser H.R. McMaster reportedly called Trump an “idiot” and a “dope” during a private dinner in November 2017, though a spokesperson for the National Security Council denied McMaster had made the comments. And there's also former Secretary of State Rex Tillerson, who reportedly referred to Trump as a "moron" in October 2017 — interestingly, though the State Department denied that Tillerson had made the remarks, Tillerson himself avoided a direct denial that he'd used the word. Oh, and in December 2017 former chief strategist Steve Bannon reportedly joked about Trump saying “He’s like an 11-year-old child" (a statement from Bannon's spokesperson called the report "fake news") — just to name a few.

What happened to all of these White House staffers? If you notice, all of these titles have the word "former" in front of them. What does that mean? You guessed it — Trump got rid of every single one of them. It appears that Trump takes these reports very seriously and makes sure to fight back in the most dramatic fashion: by pushing out these employees completely.

So will history repeat itself with Kelly? That won't be known until Trump makes his decision how how to "check" his chief of staff (so-to-speak) in the next coming months. Who knows — Trump might not decide to do anything following his denial. Or Kelly might leave his job at the White House on his own. All I know is that this type of a report has become all the more familiar since Trump has taken office. And I'm sure this latest one won't be the last.