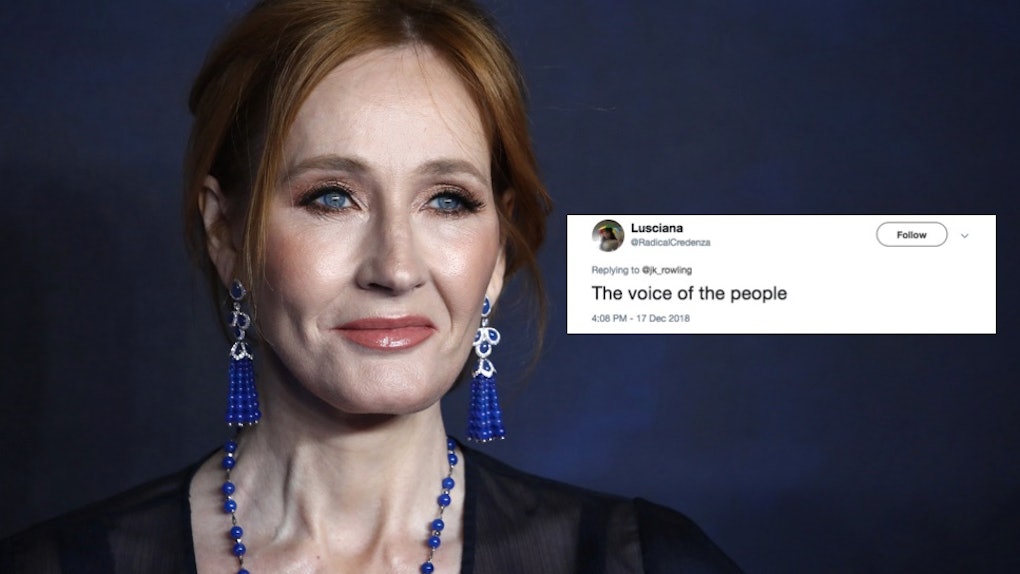 J.K. Rowling's Tweet About Morning People Is Such A Mood, I Can't Even Explain It

Morning people get all the attention in this world. They're constantly praised for setting their alarm before 8 a.m. and greeting the morning with a genuine smile on their face. Of course, to each their own, but TBH, up until J.K. Rowling’s tweet about morning people surfaced on Dec. 17, 2018, night owls everywhere had more or less been left in the shadows. But no longer, my friends, because in less than 140 characters, the Harry Potter creator has essentially flipped the bird to anyone who’s ever suggested early risers are the only ones who can be productive and successful.

Of course, I’m sure Rowling wasn’t putting down early birds, or undermining the success of people who do wake up early; she was simply making a point that people who wake up with the dawn aren’t the only ones making a name for themselves. So to all the night owls who feel like their successes aren’t being recognized or given enough credit — Rowling hears you, and she's here for you, friend.

Now, out of context, it might sound pretty random that someone like J.K. Rowling would be taking a stand against the injustices thrust upon the naturally nocturnal, but it makes sense once you read the entire thread — which, BTW, is all of two tweets because, really, who can argue with the woman who created Hogwarts?

On Dec. 16, Inc. tweeted out an article offering tips to boost your productivity in the morning. This is all well and good, and probably serviceable to a lot of people, but the reason why the outlet’s tweet riled up Rowling so much was, apparently, because of how it was captioned.

“The world’s most successful people start their day at 4 a.m.,” the tweet read. Cue Rowling sipping her English breakfast tea at 7 a.m., typing the most scathing reply she could muster in three words or less: “Oh, piss off,” she replied.

Seriously, if that isn’t a mood in and of itself, then I don’t know what is.

Obviously, I don’t know J.K. Rowling on a personal level, but she had to be feeling herself after tweeting that soundbite out into the Twitterverse, right? Like I said, morning people get most, if not all the glory, so it was about time someone stood up for all the night-walkers doing their thang — you know, the ones who roll into bed at 4 a.m.

Naturally, nocturnal Potterheads flocked to the thread, adding their own two cents ( er — galleons?), and applauding Rowling for stating hers.

While I agree that Inc.’s tweet might have been worthy of an eye roll or two, as someone who personally loves mornings, I do have to say there are benefits to being a morning person — but you definitely don’t have to wake up at 4 a.m. to reap them. Hell, you don’t even have to wake up at 7 a.m. if that’s still a little too early for you. I think a common misconception about morning people is that we’re all competing against one another to wake up the earliest, and complete the most tasks before 10 a.m., but that’s not the reality of it for many of us.

The idea behind training yourself to become a “morning person” is simply that, if you can get yourself out of bed at the earliest time you can muster (even if that’s 11 a.m. — it’s still morning, right?), you'll have that much more time in the day to accomplish your goals. At least, that's the way I see it, anyway.

Inc.'s article, on the other hand, based its findings off the routines of successful people like Apple CEO Tim Cook, Virgin America's CEO David Cush, and Michelle Gass, the chief merchandising and customer officer at Kohl's, who all apparently start their days between 3:45 a.m. and 4:30 a.m. And listen, if that's the route you want to take to achieve your goals every day, go for it. But the point I'm trying to make, and that Rowling already made very clear in her tweet, is that you don't have to be a 4 a.m. morning person to be successful. You don't have to be a morning person at all. You just have to commit to following your dreams, working hard, working with your heart, and success will come — and it won't matter at all if you rose with the sun, or chose to sleep through it.

More like this
These 40 Clever Vaccine Selfie Instagram Captions Deserve A Shot On Your Feed
By Rachel Chapman
What Is The Pinterest Lookalike Trend On TikTok? It's A Shocking Selfie Hack
By Marisa Casciano
How To Make Lizzo's Brussels Sprout Nachos From TikTok That Are Both Bussin' & Vegan
By Rachel Chapman
Stay up to date