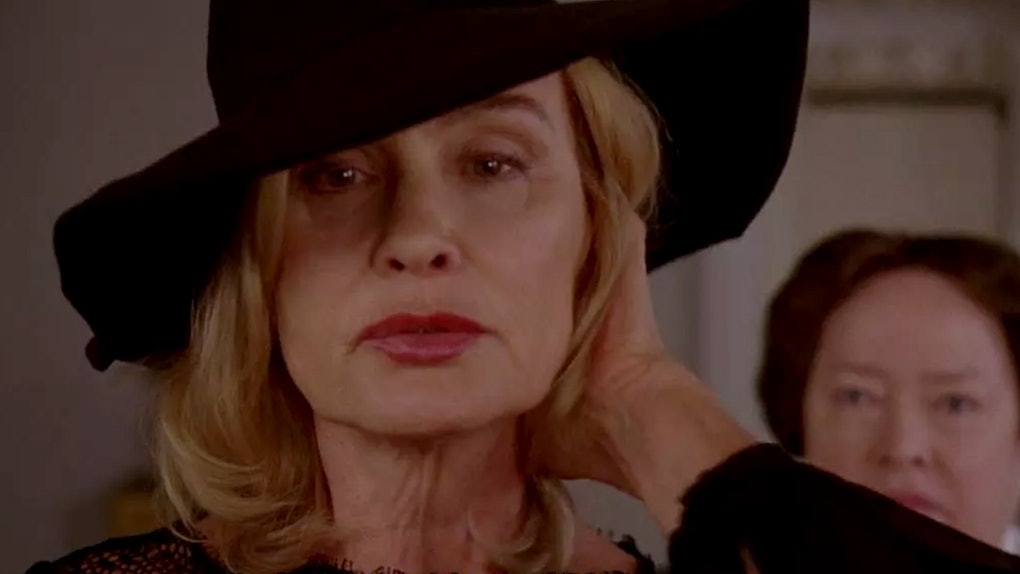 One of the exciting aspects of American Horror Story is how each season serves up a completely new, self-contained tale. But amid all that change, fans of the long-running series still consider a prominent troupe of its core actors as the beating heart of the show. Sadly, though, it sounds like one of the most beloved AHS stars is moving on from the horror series for good. Jessica Lange won't do American Horror Story again, according to her recent interview with Entertainment Weekly, so fans will have to stop holding out hope for her big return.

While Lange was central to the first four seasons of American Horror Story — helming Murder House, Asylum, Coven, and Freak Show in lead roles — she has been notably absent from the franchise ever since. Lange last popped up in a one-episode cameo in the middle of last year's AHS: Apocalypse, reprising her Murder House role of Constance Langdon, but that has been the only time she's returned to the show since Season 4 ended in 2015.

Although it has been four years and five seasons since Lange has taken another major role in AHS (the series is currently airing its ninth season, AHS: 1984), superfans of the show still consider her one of the most inextricably attached stars of the series overall, and many have been wondering when she might make her big return with another new character.

Unfortunately, it sounds like Lange has hung up her witch's hat, habit, and all the rest of her iconic AHS costumes for good. When asked by Entertainment Weekly if she would return for a future season of American Horror Story, Lange admitted she can't see herself going back to the series:

I don’t think so. I feel like I got the best of it in those first four seasons. Great characters. It was exciting to do. I worked with some of my favorite actors but I can’t see that we could ever get back to that.

Building on that surprising revelation even more, Lange also told The Hollywood Reporter that she is considering not taking any more major TV roles at all. Following her turn as the brutal, self-serving Dusty Jackson on Ryan Murphy's new Netflix series The Politician, Lange revealed that while she's not completely shutting the door on another lead TV role, it would take a lot to entice her to helm another series at this point: "It would take something very, very different and special to jump back into [series television]. Because at this point, I'm not sure I'm not finished ... I might have come to the end of it."

This has definitely been a rough couple of months for diehard American Horror Story fans. Along with Lange's news about most likely not returning to the series, the show's new season also marks the first time that perfect-attendance cast member Evan Peters will not appear, and his constant co-star Sarah Paulson reportedly only has a small part in AHS: 1984. Since many fans consider Peters, Paulson, and Lange to be the unholy trinity at the core of AHS, it has not been easy to see all three step away from the series.

However, while the old guard might be moving on, American Horror Story is still continuing to deliver new, terrifying tales. The new '80s slasher-themed season AHS: 1984 is currently airing Wednesday nights on FX.