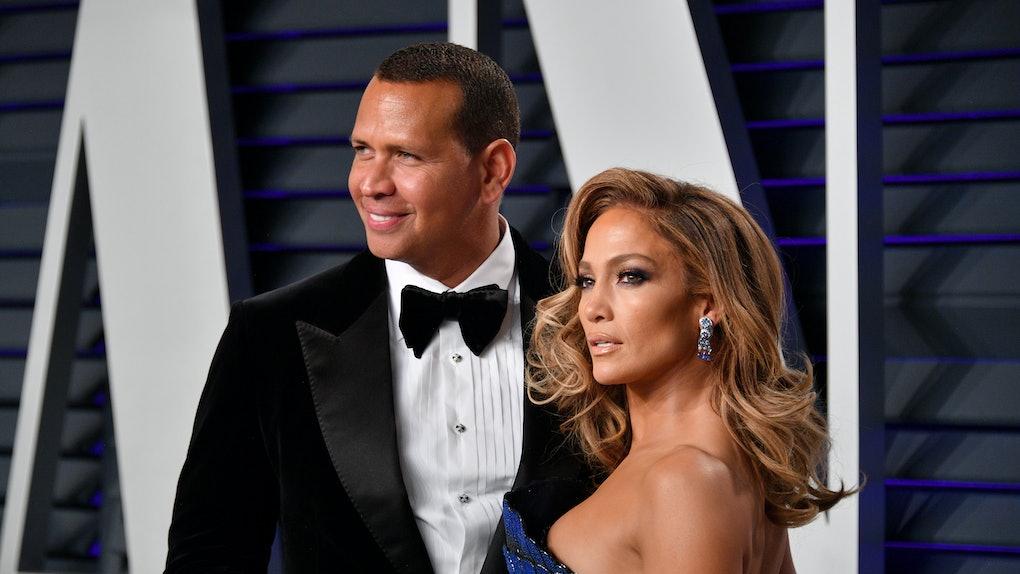 Another day, another drama. Even though Jennifer Lopez and Alex Rodriguez just got engaged, there are already people out there trying to bring them down. Mere days after both Lopez and Rodriguez posted matching photos to Instagram announcing their happy news, former Yankees player Jose Canseco accused A-Rod of cheating on his new fiancé. But, Jennifer Lopez's reported reaction to those Alex Rodriguez cheating rumors shows that she isn't letting the haters get her down.

You only have to go into a grocery store and look at all the tabloids in the checkout aisle to know that hardly a day goes by without a celebrity being accused of cheating on their significant other. Whether or not the accusations are true, they're about as common as someone bringing up Colton Underwood's virginity on this season of The Bachelor. So it really wasn't too surprising when Rodriguez was accused of cheating, but it was still incredibly sad. I mean, can they live?!

54-year-old Canseco took to Twitter the day after the couple announced their engagement to accuse Rodriguez of cheating on Lopez with Canseco's own ex-wife, Jennifer. Elite Daily has reached out to representatives for Lopez, Rodriguez, and Canseco regarding these reports, but did not hear back in time for publication.

In case you missed it, Canseco tweeted, "Watching World of Dance watching J.Lo text Alex Rodriguez little does she know that he is cheating on her with my ex-wife Jessica poor girl she has no idea who he really is," the former player wrote. Canseco then went on to provide some details on the reported cheating, tweeting, "I was there a few months back with her when he called her on her phone." He then posted, "Alex Rodriguez stop being a piece of sh*t stop cheating on Jennifer Lopez", and, "Alex Rodriguez I challenge you to a boxing match or an MMA match anytime you want."

A few hours later, he tweeted that he'd be willing to take a polygraph test to prove that what he's saying is the truth.

It's a pretty petty situation, but Lopez herself reportedly isn't really worried about it. According to Us Weekly, a source reportedly revealed that the 49-year-old isn't letting the rumors get to her. "She’s heard the cheating rumors in the past and has never let it bother her," the source reportedly told the magazine. "She trusts him and his love. They are inseparable and together almost all of the time. Jose Canseco has an ax to grind, but she doesn’t hear the noise." Obviously, as a celebrity, Lopez has to deal with rumors and allegations more than she would probably like, but it's clear that she isn't letting it affect her happiness.

It could be that she completely trusts Rodriguez and has no reason to believe he would ever betray her trust. Or it could be that she knows Canseco isn't a reliable source. Either way, Lopez is standing by her man, and neither she nor Rodriguez have even publicly addressed the rumors.

Based on Rodriguez's current Instagram stories, the two are still very much "out of office," and have no time for lies. Additionally, it's important to keep in mind that Rodriguez and Canseco reportedly already had a less-than-friendly relationship, with Canseco writing in his book, Vindicated, that he introduced Rodriguez to a supplier of steroids, as Us Weekly reported. Big yikes, but it's pretty safe to say that given their rivalry, Lopez is likely taking these rumors with a grain of salt. Hopefully, several grains of salt, on the rim of a glass, filled with tequila.