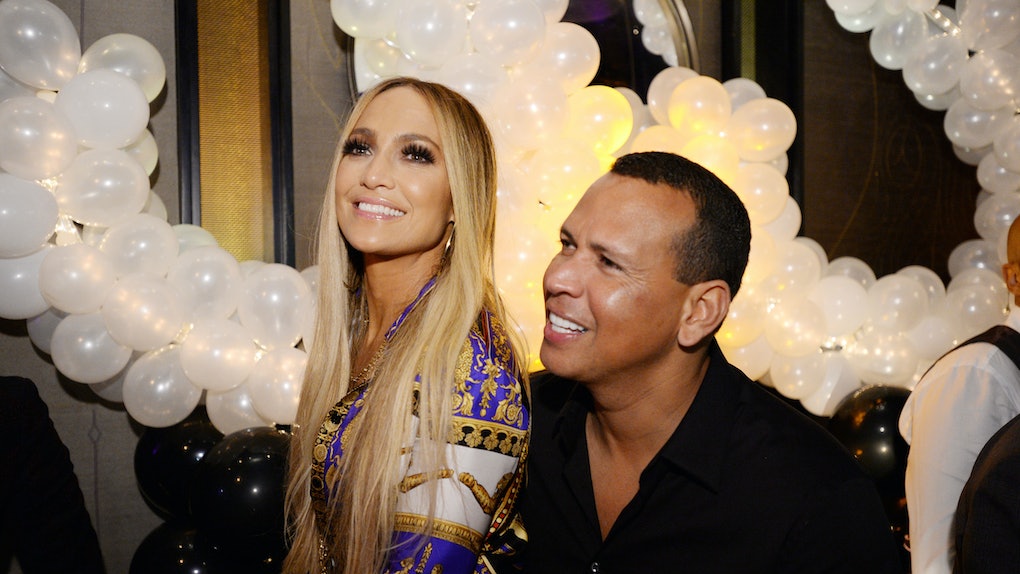 As if they weren't already the cutest couple ever, Jennifer Lopez's quotes about marrying Alex Rodriguez in a recent interview she did with the hosts of SiriusXM Hits 1 are so adorable they'll make your heart burst. First and foremost, J. Lo got super real about the fact that this won't be her first time walking down the aisle. (She's been married three times before to Marc Anthony, Chris Judd, and Ojani Noa.) When the interviewers asked J. Lo if she thinks A-Rod is "The One," she had pretty much the most hilarious response ever.

"When did you know that he was the one that you wanted to marry?" one of the show's hosts asked before J. Lo interrupted to jokingly correct him, "To get married again."

The crowd laughed, and then the singer got real. "I was very weary after everything I've been through so I don't know... probably like a year in," she said of the moment she knew he was actually going to make a fourth trip down the aisle with him. In other words, even star-studded power couples who seemingly could not be more perfect for each other need time to figure out their relationships.

"I was just sussing it out until then," she told the hosts. "I was like, 'I don't know... maybe yes, maybe no. I really love him, I like him.' Everything seemed almost too perfect too soon so it made me be like, 'Hey, wait. What's happening? Let me just wait a second.'"

That being said, J. Lo had her mind made up by the time A-Rod actually decided to pop the question. "When it happened, I think it was the right time," she explained. "We both knew."

In the beginning of the interview, Lopez also told the show's hosts that she "couldn't be happier" with her relationship.

Mainly, she noted that it's nice to have someone who shares her same non-stop work ethic.

"It's great to have a best friend and a partner that you can really build with and I just feel like with Alex and I that's what it's like. And we're both very similar! We were talking about this morning as we were, like, on the treadmill," she explained with a laugh. "It's just like having somebody who understands you from the inside as far as like, I really want to work hard. I really love what I do and I really want to work hard at it. And understand that it doesn't mean that I don't love you. We love each other, but we're doing this together."

"It's just a thing," she continued. "It's one of those things that you meet a like-minded person who is trying to be the best they can be and always trying to grow and then they help you grow and you help them grow and I'm better here and he's better here and then we make each other better together."

J. Lo also admitted that, since dating A-Rod, her life has been taken over by baseball. "I mean, it's baseball all the time," she shared. "My dad loved baseball so I grew up watching sports."

That being said, she also revealed that they actually have one very surprising thing in common. "I played softball, which he loves to make fun of me for because I was a short stop too, OK? And I was good," she said. "I mean, I wasn't a legend like he was, but it's mostly baseball." LOL, J. Lo!!

Watch the entire adorable interview for yourself here:

More like this
When Are Ariana Grande & Dalton Gomez Getting Married? Here's The Reported Tea
By Corinne Sullivan
Why Did Jennifer Lopez & Alex Rodriguez Break Up? She Dropped A Hint On Instagram
By Candice Jalili
Zac Clark & Tayshia Adams Are Wedding Planning & I’m So Pumped
By Lydia Wang
Stay up to date