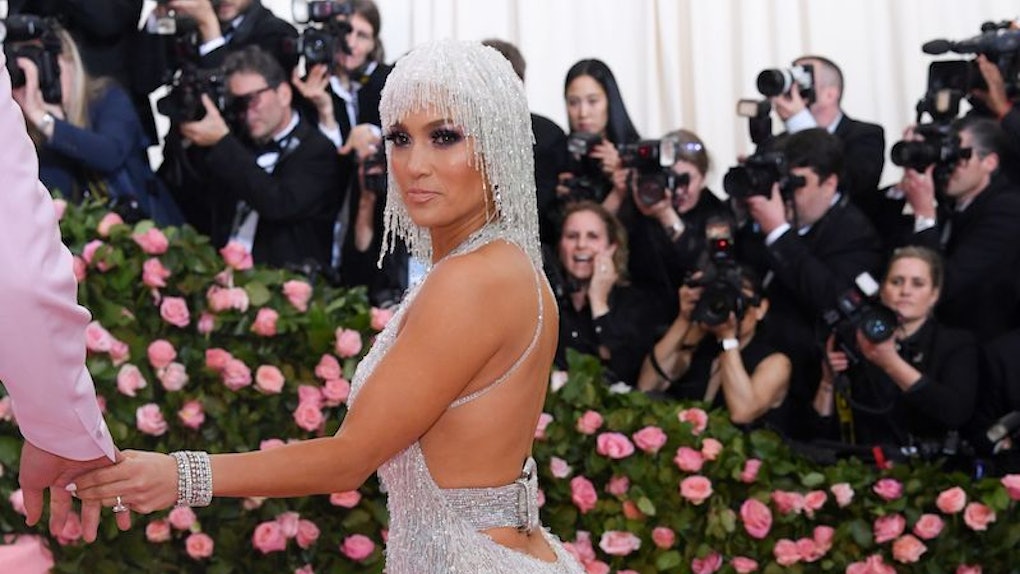 When it's announced that you'll be receiving the Fashion Icon Award from the Council of Fashion Designers of America, it's pretty much a given that any red carpet outfit you wear for the foreseeable future needs to absolutely slay. And slay Jennifer Lopez's 2019 Met Gala look did. The singer is set to be honored by the CFDA come their awards show on June 1, and the look she wore to what's essentially the Olympics of fashion, aka the Met Gala, proved exactly why she is so deserving of the commemoration. It was a dazzling, shiny, cascading masterpiece of sparkle and her wig matched it. Love. "Jennifer Lopez’s style is bold, uninhibited, and always memorable,” Steven Kolb, president and CEO of the CFDA said in a statement. “Designers, including many of our CFDA Members, love to dress her for both stage and private moments.”

In the fashion world, the Met Gala is a stage. It's a place where playing it safe is a huge faux pas and where the biggest names in fashion and entertainment go to be seen. It's where Rihanna wore her heavily meme'd yellow Guo Pei dress, and where Cher wore her iconic feathered see-through dress way before naked dresses were a thing. This all goes to say that the pressure to pull out all of the sartorial stops for the event is real, and Lopez, a woman who was literally born to take the spotlight, was more than up to the challenge.

Please feast your eyes on this magic:

The singer arrived to the event wearing a sparkling Versace dress that beautifully embodied this year's theme of "camp." No, not camp as in ringer tees, Tevas, and bug juice, but as in over-the-top styles that eschew minimalism and simplicity. As described by writer Susan Sontag's 1964 essay, Notes on 'Camp,' "The essence of Camp is its love of the unnatural: of artifice and exaggeration." Basically, more is more tonight, and Lopez got the message loud and clear.

The dress alone is stunning, but I (a non-fashion professional, mind you) think the real winner here is her wig. I've only dreamed about wearing something so badass.

Looking back at Lopez's previous Met Gala looks, it's really no surprise that she nailed this year's on the head. She's consistently arrived in outfits (mainly gowns) that not only stick to the theme, but do so with extremely sexy and ornate style. Take her look for last year's event, for example, which boldly embodied the theme of “Heavenly Bodies: Fashion and the Catholic Imagination." Designed by Balmain, the gown featured a giant cross on its bodice and boasted an inky black train that cascaded down the steps of the Metropolitan Museum of Art .

In 2015, for the “China: Through the Looking Glass”-themed gala, Lopez arrived in a sheer Versace dress up along which a dragon made of fiery red crystals and sequins slithered.

More like this
Mark Tuan's Quotes About His Solo Career Tease Endless Potential For The Future – EXCLUSIVE
By Michele Mendez
Olivia Rodrigo's "Deja Vu" Music Video Outfits Are All Delightfully Retro
By Margaret Blatz
I Tried Singing While Running Like Miley Cyrus & OMG, My Lungs
By Rachel Varina
Stay up to date