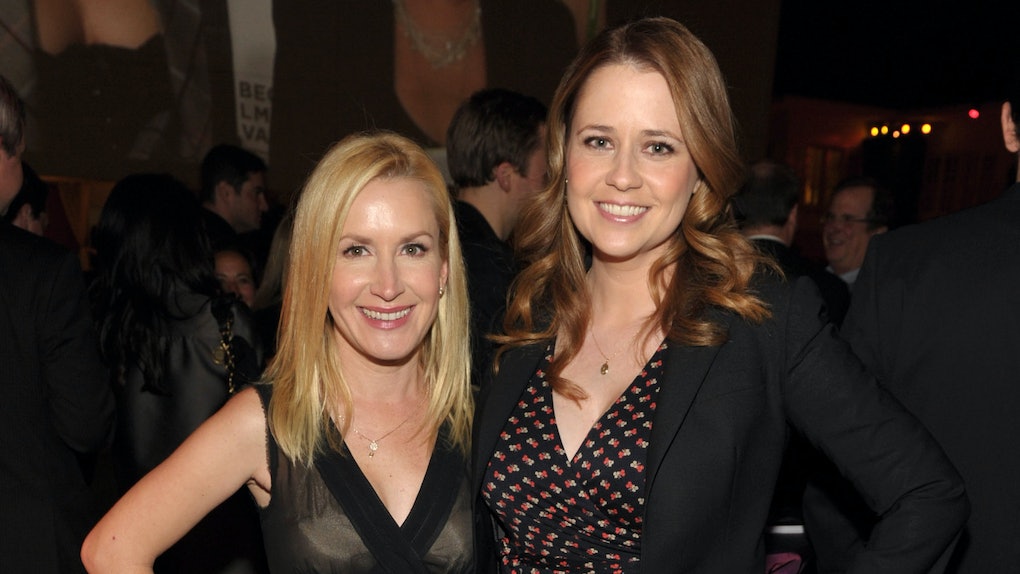 Everyone remain calm! One of the most rewatchable shows of all time is getting revisited in a whole new way. On Sept. 11, it was announced that two stars of the NBC sitcom The Office would be teaming up for a podcast about the hit show. Basically, Jenna Fischer and Angela Kinsey's new podcast about The Office is the best news I've heard about in a very long time, and I'm already preparing for all the nostalgia and behind-the-scenes nuggets of info that will come with it.

In matching Instagram posts, real-life besties Fischer and Kinsey (who, for any non-Dunderheads other there, played The Office leading ladies Pam and Angela, respectively) announced they would be launching a podcast all about their former show on Oct. 16. In each episode of the podcast, titled Office Ladies, Fischer and Kinsey will break down an episode and give exclusive behind-the-scenes details only people from the set would know. In addition to deep-cut trivia factoids and funny stories about filming, Fischer said the duo will also discuss their present-day lives, including their IRL friendship, their cats, and their Target runs.

To be totally honest, Fischer and Kinsey are so funny together, both in the show and online, I would listen to pretty much any kind of podcast they decided to make together. Of course, the fact that it's a podcast about The Office makes this project even more exciting. I'm already creating my wish list for which former costars they'll bring on as guests, though I won't reveal who my to choices are, because I don't want to jinx it. (I'm not superstitious, but I am a little 'stitious.)

The news of this podcast comes not long after the announcement that The Office will be leaving Netflix at the end of 2020. Assuming Office Ladies chronologically covers one of the TV show's episodes every week, listeners will probably be up to somewhere in Season 4 when the series leaves the streamer. Luckily, the comedy's departure from Netflix doesn't necessarily mean fans will have to listen to the rest of the podcast without being able to rewatch alongside Fischer and Kinsey; The Office will have a new home on NBCUniversal's own streaming platform in 2021, so if you were on the fence about signing up for the new service, this might help make up your mind.

According to Fischer and Kinsey's posts, Office Ladies, which is created in partnership with the podcast network Earwolf, will be available on Apple Podcasts, Stitcher, Spotify, and "anywhere you can download podcasts," so there will be plenty of new ways to get your fix of The Office.

I honestly can't decide what brings me the most joy about the creation of Office Ladies: the reunion of Pam and Angela, the ability to dive even deeper into the world of Dunder Mifflin, or the fact that Michael Scott's famous line "that's what she said" is taking on a whole new, non-dirty meaning. I think this new development is something even Stanley would crack a smile about!

More like this
Will Sandra Oh Return To 'Grey's Anatomy'? Here's What She Said
By Dylan Kickham
Could A Jackson & April 'Grey's Anatomy' Spinoff Happen? Sarah Drew Loves The Idea
By Abby Monteil
Ellen Pompeo's Response To Jesse Williams Leaving 'Grey's Anatomy' Is Emotional
By Cianna Garrison
Stay up to date