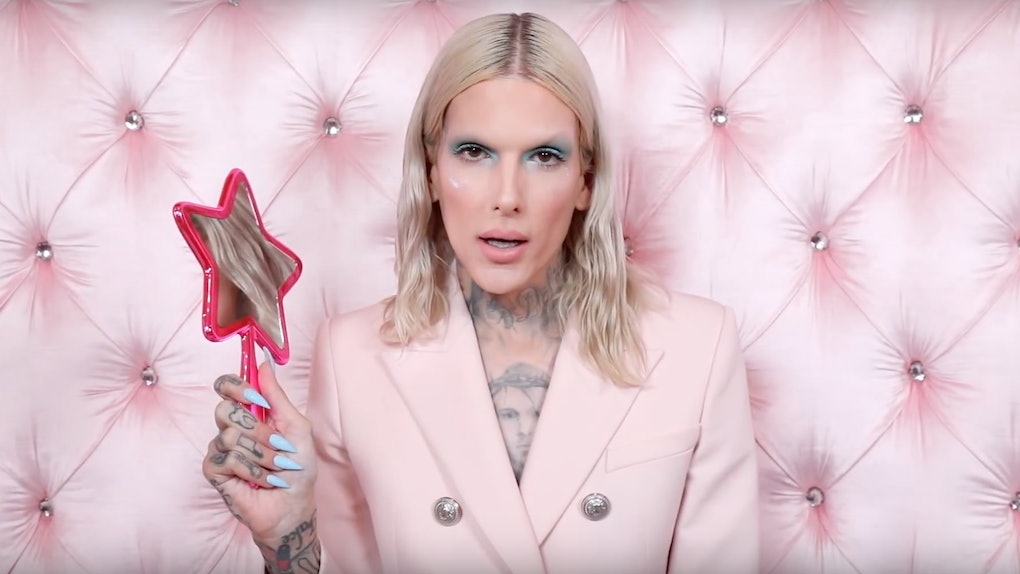 Jeffree Star Alleges His Makeup Warehouse Was Burglarized & He Lost $2.5 Million Worth Of Product

In the beauty sphere, a large percentage of news is positive and exciting: new product launches, fun influencer collaborations, celebs dishing on their favorite things. Sometimes, though, a story breaks that's much more upsetting, and after watching the video in which Jeffree Star alleges his makeup warehouse was burglarized and he lost 2.5 million worth of product, I couldn't feel worse for him. Star has run his vegan beauty brand, Jeffree Star Cosmetics, since way back in 2014, and over the years it has debuted gorgeous products, pigmented formulas, and iconic packaging. To see him in distress over this is upsetting to say the least, and if you haven't watched the video for yourself, allow me to fill you in.

After an incredibly successful launch for his latest collection, Blue Blood, Star shocked his fans earlier this week when he took to Twitter with a disheartening message. "Since it’s April Fools today, I won’t be talking about anything serious but tomorrow I need to share some really f*cked up news with you all," Star wrote on Twitter. "(It’s not about family thank God) Sorry for being so quiet lately.. But something insane + violating has happened to my brand recently." That's when he told fans about the alleged burglary. Elite Daily reached out to Jeffree Star Cosmetics for comment, but hadn't heard back at time of publication.

When a video hit Star's YouTube account entitled "My Concealer Line Was Stolen & Leaked ($2.4 Million of Makeup Hijacked)," the views came rolling in, and it's since reached more than eight million plays:

Star has 14 million followers on YouTube, 12 million on Instagram, almost six million on his cosmetics line's Instagram, and four million on Twitter, so it's safe to say his audience is massive, which might've made the news even harder to announce. "Two weeks ago, the morning of March 15, I uploaded the reveal video for the Blue Blood collection," said Star in the video. "That night at around 1:00AM, one of my stock and shipping facility warehouses was broken into and over $2.5 million worth of products were stolen from me,” he continued, and went on to share the details.

Amongst the products allegedly stolen were some of the brand's popular highlighting palettes and lip liners, but it was one item in particular that upset Star the most:

He's been hinting at the release of a concealer for quite some time now, and he claims that an entire shade was stolen during the burglary:

Star has supposedly been working on the concealer for the past two years, so to have an unreleased product go missing was no doubt a major upset. This isn't the first time a beauty brand has experienced a massive robbery. Per Refinery29, it was just one year ago that a similar incident occurred at Anastasia Beverly Hills' Los Angeles warehouse, in which $4.5 million worth of product was taken.

Star alleges that he's working with he FBI to find the burglars and ensure justice is served:

Elite Daily reached out to the FBI for comment, but didn't hear back at time of publication.

"A major player who has been selling my stolen product has been arrested," Star claimed on Twitter. As far as fans know, the investigation is still ongoing and nothing has been confirmed, but according to Star's tweets, he's not shying away from whoever supposedly did him wrong.

In the words of the wise Kris Jenner, this is truly a case for the FBI.

Of course, fans were quick to show their love and support:

Until the alleged wrongs are righted, Star has a request for his loyal fans and customers: If you see anyone pushing the allegedly stolen goods on the black market, Facebook Marketplace, or anywhere else, don't hesitate to contact Jeffree Star Cosmetics immediately. As for the allegedly stolen Magic Star Concealer, Star says in his video that the official launch will be in a few weeks, this time on his own terms.

More like this
How To Get A Trendmood Box, AKA The Next Big Thing In Beauty Box Subscriptions
By Bella Gerard and Theresa Massony
These Asian-Owned Beauty Brands Are Creating The Products You'll Use Forever
By Margaret Blatz
This ONE/SIZE Turn Up The Base Foundation Powder Review Is A Must-Read
By Theresa Massony
Stay up to date