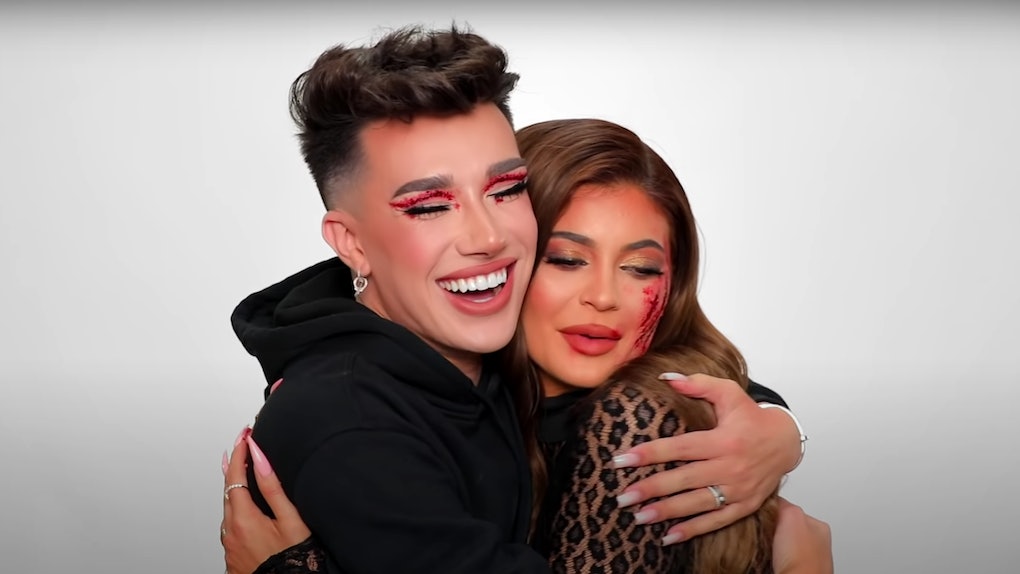 At long last, in honor of ~spooky season~, James Charles and Kylie Jenner reunited for another Halloween video, two years after their first YouTube debut together. The first time around, Charles and Jenner's Halloween tutorial involved a colorful, half-skull makeup look that, despite it being spooky and all, still looked as glam ass both beauty moguls always do. For their second Halloween video, Charles and Jenner demonstrated a much bloodier, special effects makeup look in honor of the Kylie Cosmetics cheetah-themed Wild Side collection.

Sitting beside Charles, who's wearing a bloody-but-cute (love that this is now a category) makeup look, Jenner appears barefaced as the two catch up and decide on a special effects makeup look: a few bloody scratch marks on the side of Jenner's face (because cheetahs) in addition to a sultry eye look. Charles starts by adhering some liquid latex to her cheek, which he'll later be able to cut slits into to create the open wound effect. As he does Jenner's complexion, the two dish on her life, including the story behind an adorable TikTok with Stormi, whether or not Jenner thinks about having more kids, and why she feels she can't be herself around fans.

Charles uses several products from Kylie Cosmetics, including the Pressed Powder Palette ($38, Kylie Cosmetics) from Jenner's newest collection, to create a heavily bronzed complexion look and a smoked-out brown eye look. Jenner does her lips off camera, because she apparently trusts no one — not even her regular makeup artist, according to her. Eventually, Charles ever-so-carefully cuts small strips into the dried latex, layering dark eyeshadows and, eventually, fake blood into them to make them appear more realistic.

After Charles added a few red splotches with eyeshadow around the "wound," the look is complete, and Jenner looks like she needs stitches. Immediately. But TBH, a gaping face wound has never looked so chic. To watch the whole process (and get up to date on Jenner's life), watch the video above.