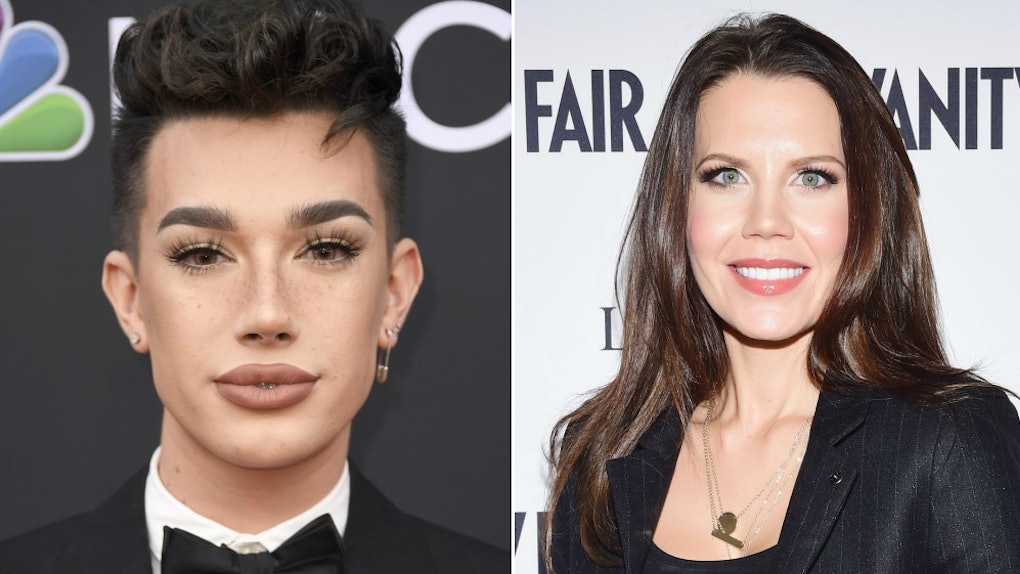 If you’ve been following the beauty community at all as of late, then you know that some major drama went down between Tati Westbrook and James Charles. While Westbrook was once Charles’ mentor, she recently unleashed a slew of negative comments and allegations against him that basically turned the beauty community into the wild west. Once Westbrook’s comments were made public via YouTube, her relationship with Charles was all but severed, which has given fans reason to take a look back at the happier times in their friendship. Sadly, all of James Charles and Tati Westbrook’s social media interactions over the past few years just make this situation all the more tragic.

Here’s a look at how their friendship played out on social media:

January 2017: James Does Tati’s Makeup For Her Wedding

One of the biggest moments in Westbrook and Charles’ friendship happened on Jan. 12, 2017, when Charles took on a hugely important responsibility: He did Westbrook’s makeup for her wedding day.

While Westbrook posted about it on Instagram, Charles took to Twitter to share his love for his friend and how much the day meant to him personally.

“Congratulations to one of my best friends & my second parents, @GlamLifeGuru! 💍 it was such an honor to be here for their special day 😭💕,” Charles wrote in his tweet, which also included two photos of him and Westbrook.

December 2017: James Thanks Tati & Her Husband For Their Help With A Medical Issue

While many may think Westbrook and Charles were faking their deep friendship for exposure, the depth of their social media interactions suggests their friendship was the real deal. And nothing proved that more than when Westbrook and her husband helped Charles out when he needed some medical assistance. Charles tweeted about it at the time and shared his love and appreciation for the couple with fans.

It seems like Westbrook and her husband truly cared about Charles at the time and were willing to help him in any way they could.

March 2018: James Congratulates Tati On The Launch Of Halo Beauty

When Westbrook launched her own beauty line, Halo Beauty, Charles was among the first to congratulate her for her success. In his tweet congratulating Westbrook, Charles said he was “happy to support” her. He even referred to her as his “momma” further enforcing the family dynamic between them. Here’s a look:

So, clearly, Westbrook and Charles were super close even as late as March 2018. How and why things went so wrong just over a year later is difficult to understand, to say the least. Charles never promoted Westbrook's products beyond that initial tweet, a fact that would become a point of contention in Westbrook's "BYE SISTER" video where she expressed the feeling that her constant support of Charles went largely unreciprocated.

Several months before Westbrook and Charles had their falling out, they actually recorded a video to discuss the challenges facing the beauty community and how they can be changed. Before sharing the video with fans, Charles shared a bit about the discussion on Twitter:

You can watch the video down below:

November 2018: James Prompts Fans To Get Tati To 5 Million Subscribers On YouTube

As an avid supporter of Westbrook, Charles gave a shoutout to his “mother” and beauty colleague in an effort to get fans to subscribe to her YouTube channel. At the time, Westbrook was almost at the 5 million subscriber mark, and Charles (who had close to 16 million) was doing everything he could to help her reach that goal.

January 2019 - May 2019: Tati Defends Charles Against Hater, Then Flips The Script On Him

Westbrook has never really been one to let anyone come after Charles. She has fiercely defended him on numerous occasions against critics, bullies, and haters. And she did exactly that in January 2019 when a news anchor couldn’t get over the fact that a 19-year-old makeup guru basically held up traffic. The anchor complained about the whole thing in this video:

Charles quoted the tweet and defended himself, but then Westbrook responded and went into Mamma Bear mode:

This was the last time the two interacted with each other on Twitter before Westbrook unleashed her tell-all video about Charles on May 10. Westbrook has since deleted the video and uploaded an explanation of why she made the original video in the first place:

Charles has also addressed her allegations in a video of his own. Have a look:

Since those videos have been published, both Charles and Westbrook have vowed to move on:

So, things spiraled out of control fairly quickly. It remains to be seen what will become of this friendship once all the drama dies down. Until then, I guess you could say…

More like this
Meghan Markle & Prince Harry's Beef With The British Tabloids, Explained
By Brandy Robidoux
Joey King's Quotes About Posting Less On Social Media Are So Relatable
By Brandy Robidoux
Matt James & Rachael Kirkconnell Reportedly Aren't Together After Their Rumored Reunion
By Joyann Jeffrey
Stay up to date