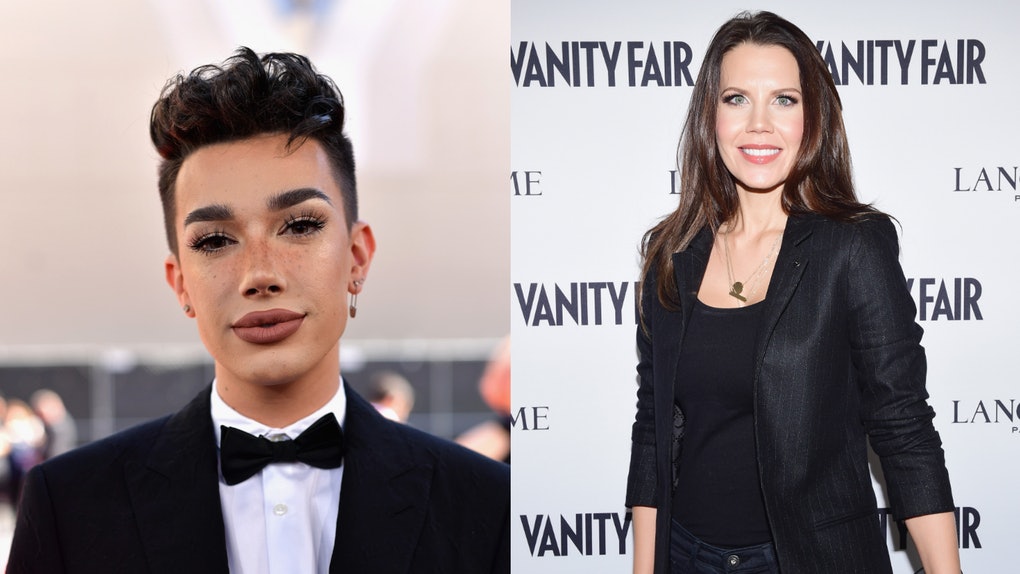 Break out the popcorn, you guys, because the major brawl between beauty vloggers James Charles and Tati Westbrook is showing no signs of slowing down. In fact, the drama just got itself a plus-one. YouTuber Nikita Dragun has now tossed herself into the mix because why the eff not? And she's got some mad receipts, y'all! Or at least it looks like she does. See, Dragun took to Twitter to share screenshots of an alleged conversation between her and Charles re: the whole SugarBearHair thing in an effort to clear Charles' name, but James Charles' reported leaked texts about the Tati Westbrook drama have only complicated the matter since some fans think they're fake. Elite Daily reached out to Charles' team for comment regarding the text messages, but did not hear back by the time of publication.

Let's recap for a sec, shall we? In her May 10 takedown video, "Bye Sister," Westbrook went off on Charles, claiming that (among other things) his Instagram post for SugarBearHair — a big rival of Halo Beauty, her own beauty brand — was something he had orchestrated with the company before Coachella, and not something he threw together on the fly after being mobbed at the festival, as he claimed.

"The SugarBearHair thing, that was a blatant lie," Westbrook said. "C'mon, you went to Coachella, somehow have a security issue and magically SugarBearHair is there with a contract in hand to save the day for you and all of your friends? No company would ever go out of the way to have an extra handful of passes that cost thousands of dollars apiece, but just in case."

If you have 43 minutes to spare, here's the full video:

So yeah, Westbrook thinks Charles lied about the timeline and depth of his relationship with SugarBearHair. And that's where Dragun comes in. The YouTuber and Dragun Beauty founder rolled up to Twitter to share some screenshots in order to help prove that Charles' endorsement of the vitamins was, in fact, a last-minute deal he worked out in order to get extra security at Coachella.

"Heard a situation needed some clarification," Dragun wrote. "My friend was in an emergency and texted me in the moment... I connected him with Sugar Bear. Nothing shady."

As you can see in the alleged text chain, Charles tells Dragun, "I am in VIP and getting attacked." He then asks her to text her "SugarBear person" to see if they have any extra artist passes for him, and says to tell the company he will "story," which means he offered to promote the gummies on his Insta in exchange for the passes.

Not gonna lie, I would totally story the shiz outta those damn gummies in exchange for an artist pass. SugarBear.... HMU!

One of the things fans found is shady, however, was the fact that Charles reportedly told his friends that SugarBear reached out to him first, and not the other way around:

Also, as anyone who's ever watched an episode of Real Housewives of wherever can tell you, text chains — or "text-a-ses" as the Housewives love to call them — can be manipulated. And that's exactly what Westbrook stans think is going on here.

Check out some of these tweets calling out Dragun for supposedly faking her receipts:

Whether or not the texts between Charles and Dragun are actually fake remains TBD. But IMHO, this drama has fake-rocked the beauty vlogger world long enough, so let's all try and move on now, mmmkay?