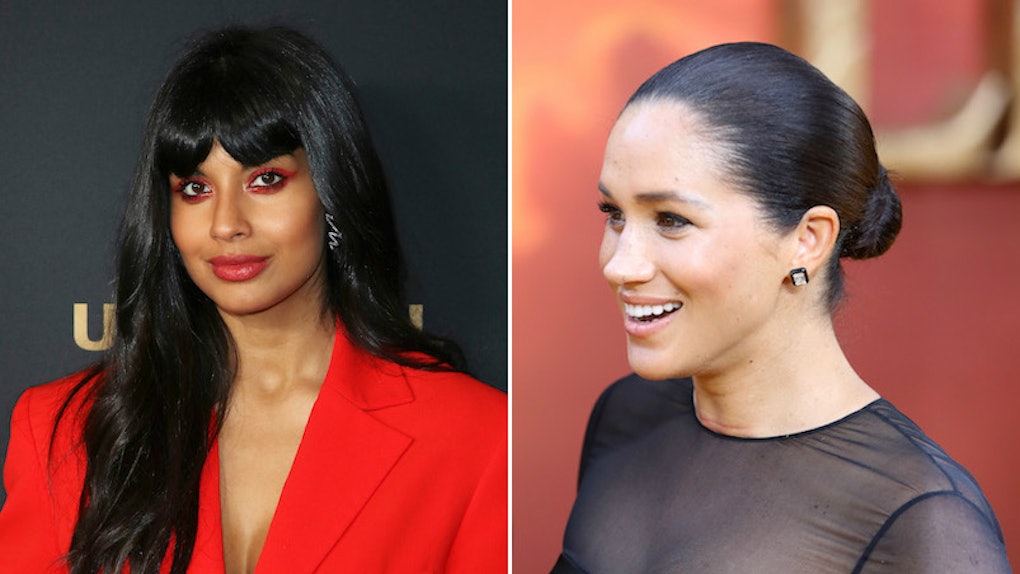 I can't believe I'm saying this but... I don't envy the royal family. Ever since Meghan Markle wed Prince Harry and became the Duchess of Sussex, it looks like her life has become increasingly more complicated, more scrutinized, and certainly less private. Misleading angles and unfair accusations are regularly in the headlines about the new parents, and it's exhausting to watch from the outside. I can't imagine how it feels on the inside. Luckily, we can always count on Justice Queen and equality activist Jameela Jamil to jump in. Jameela Jamil's tweet about Meghan Markle being bullied by the media makes several strong points, and is currently being circulated, too.

Most recently, the Duke and Duchess of Sussex are under fire for reportedly flying a private jet to visit Sir Elton John. Folks are riled up, suggesting that it is hypocritical for Harry and Meghan to promote green living and environmental awareness and then take a "gas-guzzling" private jet. Elite Daily reached out to Buckingham Palace previously for comment on their traveling arrangements, but did not hear back by the time of publication.

According to TMZ, Elton John is "deeply distressed" about the "distorted and malicious" stories surrounding his visit with the royals. The report also explains the private jet was required "for security reasons," and that John ensured it was a carbon-neutral flight by contributing to an organization called Carbon Footprint, which supports renewable energy.

Alas, regardless of Elton John's convictions, negative headlines are cascading in the press, anyway. One, in particular, prompted Jamil to step in. She retweeted a headline that reads: "The debate of Meghan and Harry's carbon footprint continues," and shared some poignant thoughts of her own. She tweeted:

Ugh. Dear England and English press, just say you hate her because she’s black, and him for marrying a black woman and be done with it God dammit. Your bullying is so embarrassing and obvious. You’ve all lost your marbles. It’s 2019. Grow up.

Jamil expanded on her own thread, adding, "I will never forget reading an English sh*t rag, writing the words, 'Meghan’s exotic DNA shall certainly THICKEN the royal blue blood line...' (bangs head against table and throws up in own mouth.)"

After that, Jamil followed up with another independent thought regarding the private jet. She tweeted: "And ALSO, it’s not safe for us to be on the same planes as royals or presidents you absolute muppets," she tweeted. "They are prime targets for kidnap and sometimes assassination. It’s in the interest of us civilians to not be endangered by proximity to people in such powerful positions."

Jamil and Sir Elton John aren't the only celebrities to come to the duke and duchess' defense on this one. Celebrity angel Ellen DeGeneres also joined in on the recent negativity surrounding her royal friends, tweeting:

Portia and I met Prince Harry and Meghan in England to talk about their work on wildlife conservation. They were the most down-to-earth, compassionate people. Imagine being attacked for everything you do, when all you’re trying to do is make the world better.

We're out here for your Meghan and Harry!