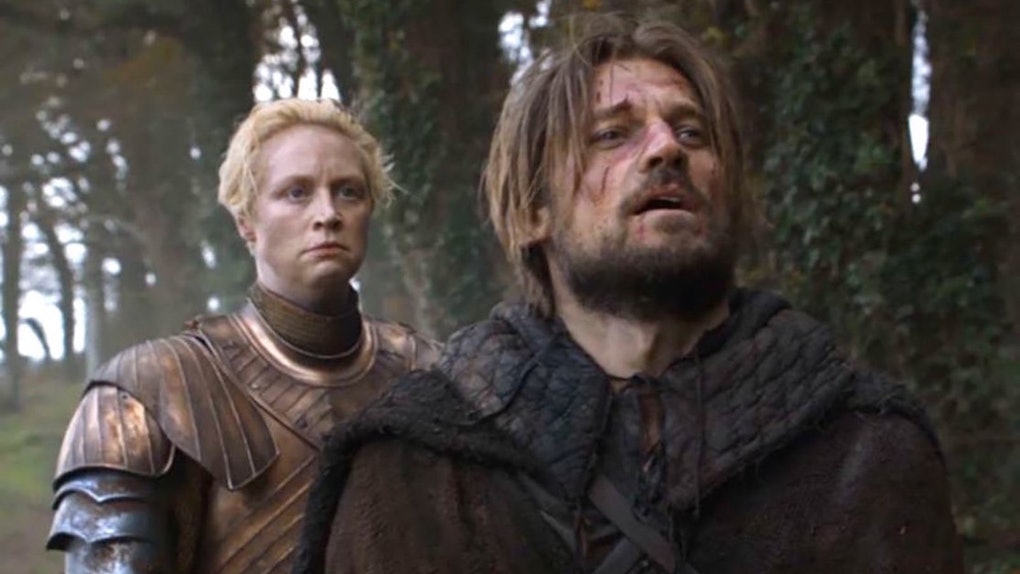 There are a lot of relationships that Game of Thrones fans root for, but the most complex and emotionally satisfying so far has definitely been the evolution of Jaime Lannister's friendship with Brienne of Tarth. The two knights may have started the series as bitter enemies, but the newly released second episode of Season 8 shows more than ever just how close they became after their travels together. As you watch all the emotional Brienne and Jaime scenes in the latest episode, it helps to remember Jaime and Brienne's history on Game of Thrones to really get the full impact of their newfound friendship.

Spoiler alert: This post contains spoilers from the second episode of Game of Thrones Season 8. Brienne and Jaime's strong bond comes into play right off the bat in the first scene of Sunday (April 21) night's latest episode. At the end of the season premiere, Jaime arrived in Winterfell and it was immediately clear that he was not going to get a warm welcome. First, he comes face to face with the kid — Bran — who he shoved out of a window way back when, and then he has to try to convince both Daenerys and Sansa to not kill him on the spot and let him fight alongside them against the White Walkers.

Both Dany and Sansa have very legitimate reasons to hate Jaime Lannister. Jaime famously killed Dany's father, the Mad King, and the Lannister family has ruined Sansa's life for years now. Of course, both leaders lay into Jaime when he offers to join the Winterfell army, and he has a very tough time convincing them he is there just to help. Until Brienne steps up, that is.

Brienne vouches for Jaime, telling Dany and Sansa about the times that he has saved her and how those events even led to Sansa's ultimate safety.

In the end, Sansa and Jon Snow both agree to allow Jaime to join their forces, and Dany reluctantly goes along with it. Later, Jaime and Brienne have yet another emotional moment. Jaime talks to his old friend as she watches over training. He then shows just how much he has grown and how much he respects Brienne by asking to join her flank of the army:

I came to Winterfell because I'm not the fighter I used to be, but I'd be honored to serve under you if you'll have me.

The moment is the culmination of Brienne and Jaime's complex history. The two first met when Brienne was serving as a knight for Renly Baratheon, and Jaime was the shining star of the Lannister's royal army. The Starks managed to capture Jaime, but when Catelyn Stark was told that her daughters were being held captive by the Lannisters, she entrusted Brienne on a covert mission to bring Jaime to the castle and use him to barter for Sansa and Arya's freedom.

Along the way, Brienne and Jaime grew from being reluctant travel companions to forming an unexpectedly close bond. They both saved one another from certain peril time and again, and it even began to look like they would enter a romance with one another, although that never fully played out. And all of their bonding finally reached its emotional climax on Sunday's new episode, as Jaime used his status as a knight to officially knight Brienne herself.

Here's hoping we get some more mushy Jamie and Brienne moments in the few episodes we have left.

More like this
10 Unanswered 'Gossip Girl' Questions The Reboot Def Needs To Explain
By Rachel Varina
Is Julia Louis-Dreyfus' 'Falcon And Winter Soldier' Character Madame Hydra? She's A Comics Villain
By Abby Monteil
6 ‘Schitt’s Creek' Spinoff Ideas That Are Simply The Best
By Rachel Varina
Stay up to date