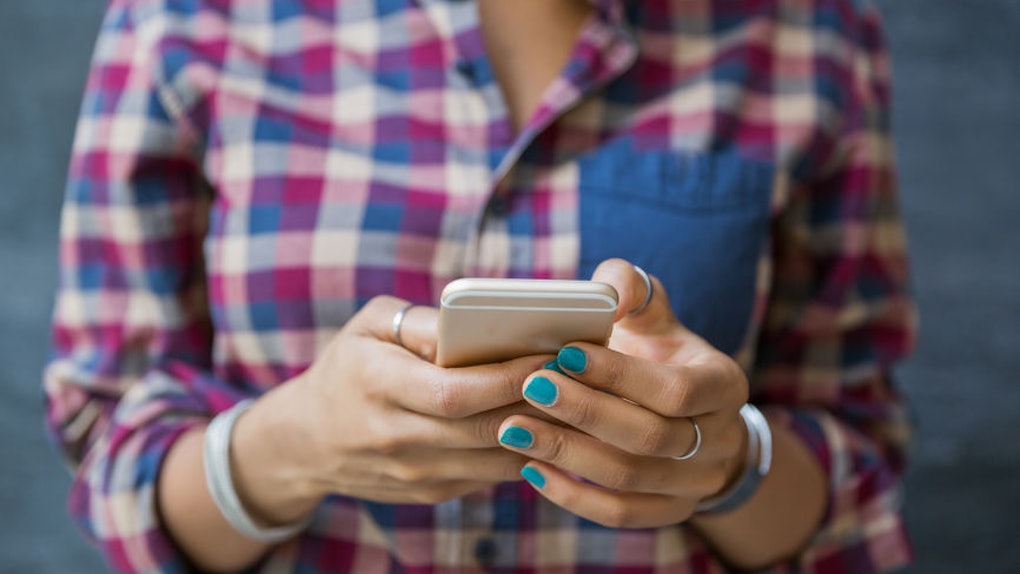 Is Your Partner Mad At You? This Is the Worst Text To Send

Whether you’re running late for date night, left a pile of dishes in the sink before work this morning, or flaked on plans last minute, one thing’s for sure: Your partner is mad at you, and you're itching to hash it out so you can move on. Naturally, you reach for your phone. Waiting until you see your SO to resolve the situation feels like sheer torture, so you open up your text thread and start furiously typing away. But what should you say? An apology is the obvious route to go down when you know bae is pissed, but will that really have the same impact as saying “I’m sorry” to their face? TBH, sometimes it feels like that's not even enough to diffuse the situation.

The truth is, the best way to make peace is usually in person. In fact, a 2013 study conducted at Brigham Young University found that using text messages as a way to settle disagreements or apologize was associated with lower relationship quality. It makes sense, too — researcher Jonathan Sandberg pointed out that much is lost over text because we can’t perceive our partner’s emotions accurately without seeing their face, and thus, can’t always react appropriately.

That said, there are times when you may feel tempted to reach out over text — maybe you know you won’t be able to see your boo for a few days, and you want to sort things out before the issue gets brushed under the rug. In this case, there are particular words and phrases experts say you should avoid saying to your partner in order to keep the conversation productive and prevent the situation from escalating.

First of all, it’s important to think about why you’re texting them. Are you looking for confirmation that they're actually mad? Are you hoping for an explanation as to why they’re mad? Are you waiting for an opportunity to explain yourself or apologize? Be honest with yourself about your intentions.

If you’re trying to confirm that they’re pissed and understand the reasoning, resist the temptation to reach out and say, “why are u mad at me?” This puts a lot of pressure on your SO to type out a long explanation, which TBH, they might not be up for. They might need time to process their anger, and also might prefer to explain their feelings to you in person. In other words, demanding an explanation over text could potentially piss them off further. Chris Armstrong, the founder of the relationship coaching company Maze of Love, also advises to avoid accusations. When we sense that bae is mad, we sometimes have a tendency to go into defensive mode — and try to flip the blame onto them. Texting messages like “I was late because you made me buy the tickets!” or “Maybe I’d do the dishes if you had gotten more soap at the store last night!” shows that you’re in denial of the role you played in making them mad, and that you definitely aren’t sorry — in fact, it suggests that you’re looking for an apology instead.

He also recommends resisting the temptation to text any sort of ultimatum — whether it’s “you need to tell me why you’re mad, or I’m not talking to you” or “you need to get over this, or I can’t do this anymore.”

“Avoid phrases that put them in a proverbial corner with nothing to do but escape,” Armstrong tells Elite Daily. “Watch your text words and if there are threats and ultimatums in the drafts, delete and reframe.”

According to Nicole Richardson, licensed marriage and family therapist, you should be careful not to be vague when your partner is mad, as there’s a higher risk of misunderstanding things over text. For example, she tells Elite Daily that you should never say "I'm done” — two deadly words that may be misconstrued to mean something much worse than you intended.

“That leaves the other person to wonder if you are done with the relationship or with the conversation,” Richardson ads.

She also advised against saying the classic dreaded phrase, “we need to talk" or any variation of that.

“It will lead your partner to think you want to break up,” she explained. “And if you want to work things out, hurting them is more likely to cause additional damage.”

It’s also tempting to fall into the trap of explaining yourself. You sense your SO is mad, and you immediately want to justify whatever your behavior was that ticked them off. “I was having a stressful day,” or “I was so tired,” or “I didn’t think you’d care about XYZ.” These justifications may make the situation worse because your partner may need validation for why they’re mad, not excuses for why they shouldn’t be mad.

So, now that you know all the things not to say over text when your partner is mad, what should you say instead? Since an apology is bound to mean much more in person, it’s best to try and set aside some time to do just that.

Richardson recommends asking, “When can we meet up so we can talk?"

“That way your partner is less likely to show up feeling defensive and there is still a sense of urgency,” she explained.

Mike Goldstein, founder of EZ Dating Coach, says it's best to have a plan in place — or a "contract," as he calls it — for how to handle things when one or both of you is mad. That might mean taking a timeout and spending some time apart until you can discuss the issue in a healthy way. Regardless of the plan, you should both be on the same page about the protocol ahead of time.

When your partner is pissed off, the name of the game is to avoid making them even more upset. So it’s important to be careful about the language you use over text — without facial cues and tone of voice to support what you’re saying, much can be lost. As a general rule of thumb, the more serious the issue at hand, the less suited texting is to resolve it. Still, if you feel the need to address that your SO is mad, you can certainly acknowledge the circumstances and attempt to set aside some time to talk through it. Who knows? Your partner may be relieved that you noticed that they’re pissed, because it takes the pressure off them to confront you about it.

Remember: Whenever possible, it’s best to hash out a problem in person. If you can treat texting as a tool to simply open up the line of communication, rather than make your point and close it, then you should be able to address why your SO is mad without accidentally causing things to escalate further. One argument isn't the end of the world: When it comes to the grand scheme of your relationship, it's only a pebble in the sand.